Manchester City stretched the gap back to 12 points at the top of the Premier League with a 4-0 victory over Norwich with Raheem Sterling scoring a perfect hat-trick.

Norwich were unbeaten on a run of three games but, despite threatening in periods of the first half, were undone by a fine strike from Sterling on 31 minutes after Max Aarons scuffed a clearance.

Pep Guardiola’s side have won all 18 Premier League games when scoring first this season and took that run to 19 as Phil Foden made the game safe on 48 minutes, scrambling a close-range finish home that was given the all-clear by goal-line technology. 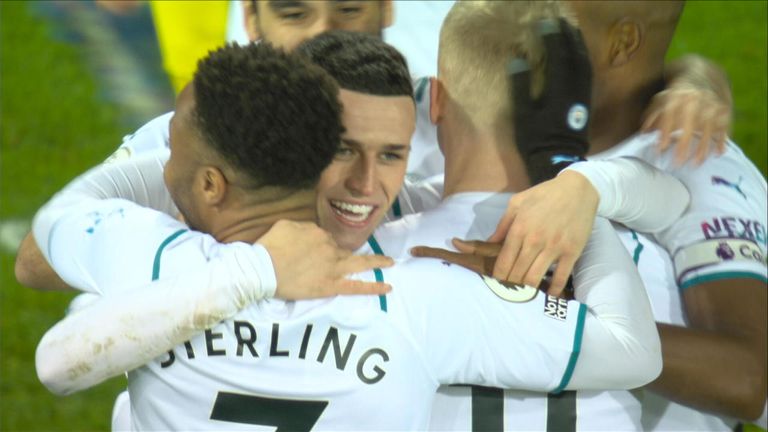 Norwich knew their fate at this point and City wrapped up the game when Sterling arrived from close range to head home following Ruben Dias’ powerful header across goal. There was still time for the England international to score his seventh career hat-trick – a perfect one at that – when tapping home with his left foot after his original penalty kick had been saved by Angus Gunn.

The City machine are now unbeaten in their last 15 Premier League games, winning 14 of those as they power towards retaining the title. 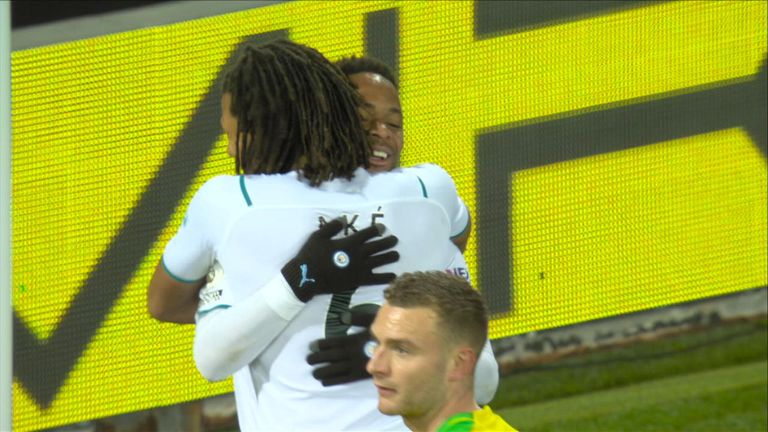 Liverpool have a chance to move back to within nine points of the runaway leaders on Sunday when they face a trip to bottom-of-the-table Burnley.

Man of the match: Raheem Sterling

Meanwhile, Norwich, who struck the post in the first half with the game at 0-0 via a Grant Hanley header, remain firmly in relegation trouble in 17th place and have played two more games than Newcastle and Everton, who sit directly above them in the table.

Man of the match: Raheem Sterling

It is easy to forget Sterling had only scored one Premier League goal this season at the start of December following a stop-start period that perhaps was a bit of a hangover from his dazzling performances for England at the Euros. But the Sterling we are seeing now is the fully-fit and fully-firing version. He was outstanding in the 1-0 win over Chelsea and has maintained that level of form since, ripping Aarons apart down the left flank at Carrow Road.

His treble takes his tally to eight goals in his last eight appearances against Norwich and he now has 10 goals in total in the Premier League this season. He is City’s top goalscorer in the competition. There will be more to come judging on his showing. He is a man in red-hot form.

“He was absolutely outstanding,” he said Sky Sports’ Andy Hinchcliffe.

“The longer the game went on, the more his quality shone through.”

Sterling contract situation – where could he go?

Sterling said he would consider leaving Manchester City and moving abroad during an interview in October – a period when he was out of the team. The England international, who joined City from Liverpool for £ 49m in 2015, has less than two years left on his contract at the Etihad.

He said: “Sterling is fundamental to Manchester City. Where could he go? The lure of Real Madrid and Barcelona aren’t what they were. It feels like the right fit at City. Only Sergio Aguero and Lionel Messi have scored more goals under Guardiola. Sterling knows where the goal is. The important moments in games is where he comes alive. He is an absolute nightmare to play against. “

Sterling on the rise – Opta stats 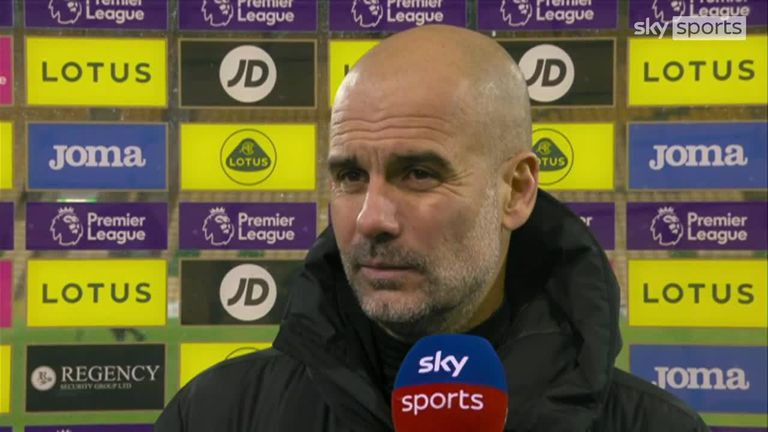 Guardiola told Sky Sports: “It’s a brilliant first goal. The second one was there and you realize after the goal how confident he is [Sterling] is, how aggressive. In the last game he made an excellent action against Brentford to win the penalty. He is a guy that always creates something.

“He [Riyad Mahrez] is an exceptional player but I want more. He’s clever, he’s a goalscorer. But sometimes I want more. Sometimes he’s a little bit weak in the duels. We’ve known each other a long time and he knows the intentions we say to him is in a positive way. “

Any hope for Norwich?

On the face of it, this looks like a typical City victory where the opposition can take little from it. However, for 48 minutes, Norwich were in this game.

Milot Rashica showcased his talents and how much the club have missed him with an excellent ball-carrying performance that got Norwich up the pitch at key points in the match. Even the formidable Dias had to take one for the team and pick up a card to halt a driving Rashica run that had started inside his own box.

If Hanley’s header had been two inches to the left midway through the half, this could have been an uncomfortable evening for Guardiola’s side. Norwich lacked quality in both boxes but commitment and speed in transitions were up to Premier League standard.

The three-game unbeaten run may have come to an end but there were still more positive signs for Dean Smith and his side that a survival bid can be negotiated.

Norwich face Liverpool at Anfield next Saturday at 3pm, while Manchester City visit Sporting Lisbon in the Champions League last-16 first leg at 8pm on Tuesday.