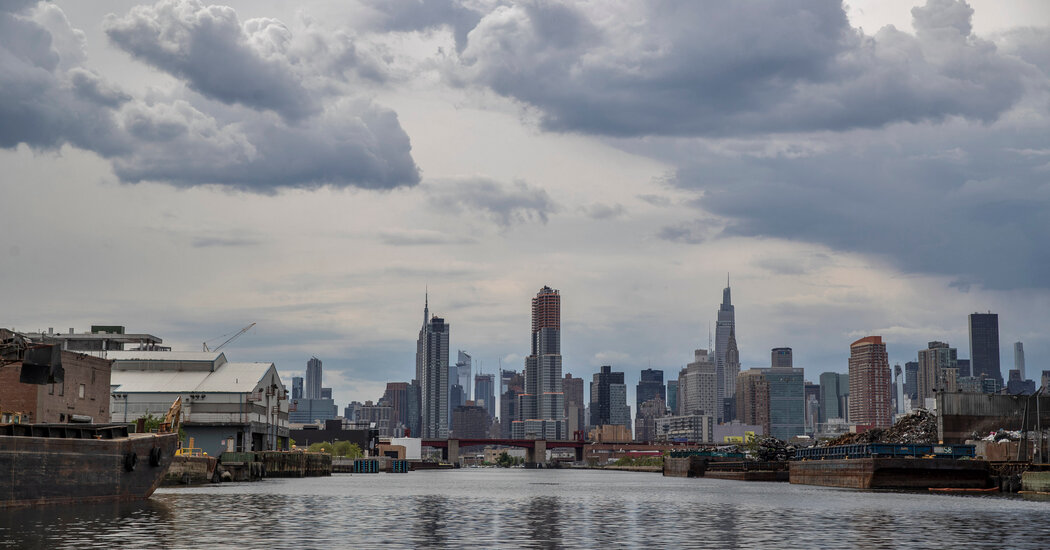 ALBANY, NY – New York Democrats on Sunday proposed a redesign of the state’s congressional map that would be one of the most consequential in the nation, offering the party’s candidates an advantage in 22 of the state’s 26 House districts in this fall’s midterm election.

Party leaders in Albany insisted that the redrawn districts were not politically motivated, and they appeared to be somewhat less aggressive than many Democrats had wanted and analysts had forecast.

But the proposed lines promise to be a major boon for the party for a decade to come, beginning with a hard-fought national battle with Republicans this year for control of the House of Representatives. With President Biden’s agenda hanging in the balance, Democratic gains in New York could help offset those Republicans expecting to rack up in red states like Texas, Florida and Georgia.

“With the stroke of a pen they can gain three seats and eliminate four Republican seats,” said Dave Wasserman, a national election analyst with the Cook Political Report, who called the proposed lines “an effective gerrymander” by Democrats.

“That’s a pretty big shift,” he added. “In fact, it’s probably the biggest shift in the country.”

The new lines give Democrats opportunities to pick up seats on Long Island, in upstate New York and in New York City, where Representative Nicole Malliotakis, a Staten Island Republican, would be drawn into a Democratic-leaning district. Republicans are likely to lose a fourth seat because New York, which had less population growth than some other states, must shed one district overall.

Other proposed changes could help shore up Democrats’ hold on swing districts on Long Island and in the Hudson Valley ahead of what is expected to be a punishing election season for the party overall.

In 2014, New York State voters had empowered a bipartisan commission to draw the new districts, but the panel broke down on party lines and could not reach consensus. Its stalemate left it to Democratic leaders in Albany to redesign the map.

“We did the best we could with a flawed process,” said State Senator Michael Gianaris, who chairs the legislative redistricting task force that took over the process from the commission. He added: “This is a very Democratic state, let’s start there. It’s not surprising that a fairly drawn map might lead to more Democrats getting elected. ”

Lawmakers plan to vote on the congressional map as soon as Wednesday. New maps for the State Senate and Assembly are also expected this week. Democrats dominate both houses, and the new maps offer the party a chance to maintain majorities, if not supermajorities, in the Legislature.

Gov. Kathy Hochul, a Democrat, has indicated that she supports using the redistricting process to help her party and is likely to approve the maps if they pass both chambers.

Republicans are expected to oppose them en masse, but have little power to stop them legislatively. They accused Democrats of undertaking a blatant and unconstitutional partisan gerrymander.

Nick Langworthy, the chairman of the New York Republican Party, blasted the map as a “textbook filthy, partisan gerrymandering” and hinted that Republicans could challenge the proposed district as unconstitutional in court.

“These maps are the most brazen and outrageous attempt at rigging the election to keep Nancy Pelosi as speaker,” he said, adding that Democrats “can not win on the merits so they’re trying to win the election in a smoke-filled room rather than the ballot box. ”

Republicans were not the only interested parties alarmed by Democrats’ swift action. Lawmakers are poised to vote this week without convening a single public hearing, drawing the ire of good governance groups and community leaders. Even rank-and-file Democratic lawmakers only saw the proposed lines for the first time in the last few days, leading to last-minute changes.

The redistricting stakes could scarcely be higher. Democrats control the House of Representatives by the thinnest of margins and are preparing for stiff challenges to their hold on Albany as well. Midterm elections are often difficult for the party in power, and with Mr. Biden’s approval rating at about 40 percent, Democrats are on the defensive.

Around the country, battles over redistricting have become increasingly bare-knuckle, with high-stakes brawls between ruling Republicans and disempowered Democrats in North Carolina, Alabama and Ohio landing in state court. In some cases, the pitched battles reflect the tensions not just over party representation, but over race and voting rights at a time when states across the country are advancing laws concerning the right to vote: some expanding it, and others restricting it.

How US Redistricting Works

What is redistricting? It’s the redrawing of the boundaries of congressional and state legislative districts. It happens every 10 years, after the census, to reflect changes in population.

How does it work? The census dictates how many seats in Congress each state will get. Mapmakers then work to ensure that a state’s districts all have roughly the same number of residents, to ensure equal representation in the House.

Who draws the new maps? Each state has its own process. Eleven states leave the mapmaking to an outside panel. But most – 39 states – have state lawmakers draw the new maps for Congress.

If state legislators can draw their own districts, will they not be biased? Yes. Partisan mapmakers often move district lines – subtly or egregiously – to cluster voters in a way that advances a political goal. This is called gerrymandering.

Is gerrymandering legal? Yes and no. In 2019, the Supreme Court ruled that federal courts have no role to play in blocking partisan gerrymanders. However, the court left intact parts of the Voting Rights Act that prohibit racial or ethnic gerrymandering.

Several factors worked in Democrats’ favor during this year’s redistricting in New York. The 2020 census recorded population growth in areas around New York City and decline in rural stretches of northern and western New York, which tend to skew Republican. And this is the first redistricting cycle in decades in which Democrats enjoy complete power of the majority in Albany, and with it, the ability to draw lines as they see fit.

Representative Sean Patrick Maloney of New York, the chairman of House Democrats’ campaign arm in Washington, had been pushing his counterparts in Albany to take a more aggressive tack, outlining a vision for the state’s congressional districts that would have created 23 Democratic seats.

But leaders of the State Assembly and State Senate appear to have opted for a somewhat more conservative approach, concentrating more Democratic voters in somewhat fewer seats rather than spreading them out and risking more widespread losses during a potential Republican wave.

On Long Island, where the two parties each control two districts, the proposal would give Democrats a good chance at winning a third by extending the right-leaning First District west into friendlier territory. The seat is held by Lee Zeldin, a Republican who is bowing out to run for governor.

In New York City, the new 11th District, held by Ms. Malliotakis, would remain geographically centered on Staten Island, but extend farther north into left-leaning parts of Brooklyn, including Sunset Park and Park Slope. The new district would be far harder for a Republican to win and could pave the way for a comeback by Max Rose, a Democrat who held the seat from 2019 to 2020.

And in upstate New York, Democrats are poised to collapse one Republican district altogether and tip another swing seat around Syracuse in their favor by adding more Democratic territory. The changes leave Representative Elise Stefanik, the No. 3 House Republican who represents much of the North Country region, secure, but could force Representative Claudia Tenney, a Republican in a neighboring district, to retire or face the possibility of defeat.

Democrats also attempted to try to tighten their hold on several swing districts. The reconfigured Third District, for instance, would sprawl from Suffolk County through Nassau County, Queens and the Bronx into left-leaning parts of Westchester. The 19th District, held by Rep. Antonio Delgado, would stretch from Dutchess County in the Hudson Valley all the way to the Democratic-leaning cities of Utica and Binghamton in Central New York.

Reapportionment occurs every 10 years, following the results of the US census. In 2020, New York came up 89 people short of maintaining its current representation and lost a seat. But in the winner-takes-all game of redistricting, one man’s loss is another’s gain, and this year is no exception: subtracted seats in Democrat-led New York, California and Illinois mean additions in Florida, North Carolina and Texas, where Republicans control statehouses.