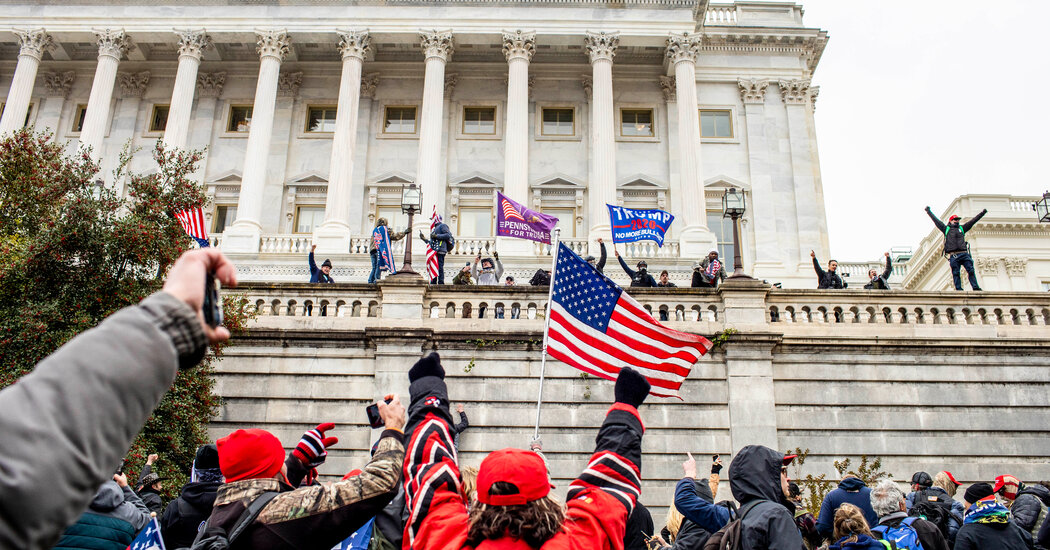 An Ohio man who claimed that Donald J. Trump was legally responsible for his decision to break into the Capitol on Jan. 6, 2021, and make off with a bottle of bourbon and a coat rack was convicted on Thursday in the first trial connected to the riot to feature a defense that blamed the former president.

The defendant, Dustin Thompson, an unemployed exterminator from Columbus, based his entire trial defense on the argument that he had merely been following orders from Mr. Trump last year when he walked up to the Capitol after the former president’s speech, broke into the building with a pro-Trump mob and stole the items from the Senate parliamentarian’s office.

When Mr. Thompson testified in his own defense on Wednesday, he tried to paint a sympathetic portrait of himself, telling the jury how he had fallen down a “rabbit hole” of election misinformation starting after he lost his job during the pandemic in March 2020 and culminating in his presence in Washington for Mr. Trump’s speech near the White House on Jan. 6.

He testified that he believed he had been answering the president’s call to go to the Capitol and “fight like hell” when he joined the throng that swarmed into the building.

“If the president’s giving you almost an order to do something,” he told the jury, “I felt obligated to do that.”

But the jury in Federal District Court in Washington took less than three hours to reject that claim and find Mr. Thompson, 38, is guilty of all six charges he was facing. The most serious charge in the indictment accused Mr. Thompson of obstructing Congress’s duty to certify the final results of the election, a count that carries a maximum penalty of 20 years in prison.

Within minutes of the verdict being read, Judge Reggie B. Walton, who oversaw the trial, ordered Mr. Thompson – who had been out on bail for months – to remain in jail before his sentence was issued.

The judge said he was offended by Mr. Thompson’s attempts to blame Mr. Trump for his own actions, calling the defense “disingenuous” and saying that he felt that the defendant had been neither “truthful” nor “sincere.”

Though jurors were apparently not swayed by the claim that Mr. Trump had been responsible for Mr. Thompson’s actions, Judge Walton suggested after the jury was dismissed that he believed the relentless flood of conspiracy theories and lies stoked by the former president had helped give rise to the riot, and continued to pose a danger.

“I think our democracy is in trouble,” he said, “because unfortunately we have charlatans like our former president who, in my view, does not care about democracy but only about power.”

From the start, Mr. Thompson’s Trump-made-me-do-it defense was a bit of a stretch. Similar arguments had failed to gain much traction with judges at a series of pretrial bail and sentencing hearings. Mr. Thompson’s lawyer, Samuel H. Shamansky, tried the gambit largely because he did not have many other choices.

Mr. Thompson had, after all, been caught on video illegally entering the Capitol and later posed for a selfie outside the building standing beside the antique wooden coat rack. The government also had a copy of a video he took of himself, hooting and hollering inside the looted parliamentarian’s office.

Mr. Shamansky’s strategy boiled down to the question of Mr. Thompson’s state of mind on Jan. 6. He stipulated in advance to nearly every element of the charges that his client was facing and sought to argue to the jury that Mr. Thompson had not knowingly or corruptly broken the law, but rather had been “so influenced – so used and abused” by Mr. Trump that he could not be held accountable for his behavior.

Debating a criminal referral. The Jan. 6 House committee has grown divided over whether to make a criminal referral of former President Donald J. Trump to the Justice Department, even though it has concluded that it has enough evidence to do so. The debate centers on whether a referral would backfire by politically tainting the expanding federal investigation.

But during cross-examination, Mr. Thompson was tripped up by a prosecutor, William Dreher, who got him to admit that he had known it was illegal for him to be inside the Capitol. Mr. Dreher also got Mr. Thompson to acknowledge that even though Mr. Trump may have encouraged him – and thousands of others – to go to the Capitol, the former president had not been at his side, offering instructions, when he broke into the Capitol and stole government property.

During his closing argument on Thursday, Mr. Dreher called the attempts to move the focus away from Mr. Thompson and onto Mr. Trump a “sideshow.” Mr. Dreher told the jurors that even if they did not like Mr. Trump – and even if they believed that he had encouraged the crowd to riot – they could still reject Mr. Shamansky’s arguments and find Mr. Thompson guilty.

The Justice Department has so far won all three of its jury trials connected to the Capitol attack. In early March, Guy Wesley Reffitt, a member of a Texas militia, was convicted of leading a decisive advance against the police outside the building while wearing a pistol on his hip.

On Monday, a jury found a former Virginia police officer, Thomas Robertson, guilty of six counts, including the obstruction of the official electoral count by Congress.