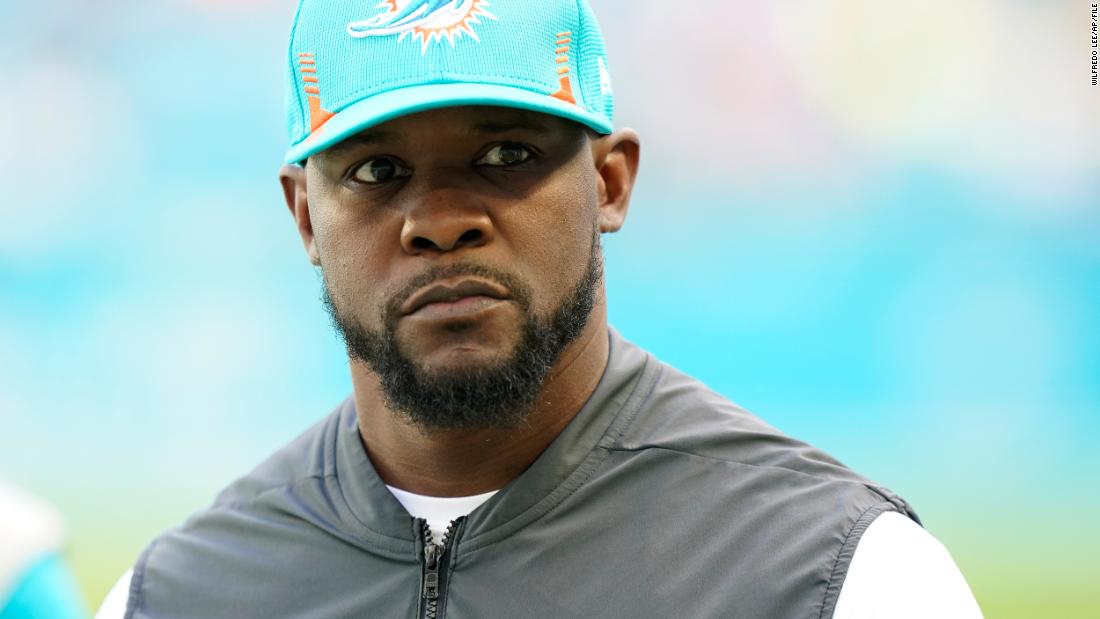 Whether I was the “grill girl” at McDonald’s, an ESPN executive or a business owner, I learned that my real power derived from an ability to innovate, defy cultural assumptions and confront systemic racism – not where I fell on anybody’s org chart.

Plenty of people know this already. But in corporate America, and places like the NFL, people get it twisted.

They are often dazzled by bright lights and fancy titles. They get beat down and brainwashed into believing their power can only be measured by the size of their paycheck. They learn to go-along to get-along and stay silent.

No doubt, many think Flores should be grateful just to be counted among the few Black coaches in the league. He entered the coaching ranks in 2008 and spent 11 seasons with the New England Patriots under coach Bill Bellichick before he was hired in Miami in 2019. He got Super Bowl rings to show for his work.

No one expected Flores, who seemed to have a long career in front of him at the age of 40, to disrupt the NFL.

But disrupt he did.

Last week, Flores, fed up with his treatment and that of other Black executives, filed a class-action lawsuit against the NFL and three teams Tuesday alleging racial discrimination. He is suing the Miami Dolphins over his firing in January – a termination that happened despite the team’s first consecutive winning seasons in nearly 20 years (10-6 in 2020, and 9-8 in 2021). Flores also is suing the Denver Broncos and the New York Giants, alleging those two teams discriminated against him in the hiring process. The NFL called Flores’ allegations meritless, and all the teams named in his lawsuit deny any wrongdoing.
The dearth of Black coaches has long been apparent and those of us who have worked in sports, specifically the NFL, were not surprised by Flores’ accusations of racism. The surprise – for me, a welcome one – is that Flores isn’t just continuing the conversation, he’s confronting the problem with the full awareness of what happens to Black men in the league – witness the backlash against Colin Kaepernick or Eric Reid – who lift their voices too loudly with talk of racism.
But Flores seemed prepared to face the consequences when he was asked whether he understood that the lawsuit might end his career. “This is not about me. And I understand that. This is bigger than me … this is bigger than football. Many have come before and done a lot to create change in this country for people of color. And I just felt like in this instance it was my turn to step up and be an agent for change, “Flores said on CNN Wednesday.

One day after Flores filed his lawsuit, Hue Jackson, another Black coach, spoke out in support and offered to join the lawsuit if needed. Flores had alleged Dolphins owner Stephen Ross offered him $ 100,000 to lose games in order to give the franchise a better position in the NFL draft. (Ross said, “His allegations are false, malicious and defamatory.”)

Jackson, who is currently head coach at Grambling State University, was fired from his position as head coach of the Cleveland Browns in 2018 after the team won just one game in two NFL seasons in 2016 and 2017. And that pitiful record gave the Browns the No. 1 draft pick for two straight years, which Jackson alleges was the point. On Wednesday, he told ESPN that the team had a four-year plan that incentivized losing during the first two years along with financial incentives for draft picks. Team owner Jimmy Haslam denied Jackson’s claim, saying the coach “never ever accepted responsibility for our record during that time period.”

In the course of my own career, I’ve spent countless hours with Black players, coaches and agents comparing notes and strategizing ways to best deal with discrimination and hostility in the workplace.

For myself and many of my colleagues, Flores’ power move is a blueprint and a turning point that announces going-along-to-get-along does not have to be our default position any longer.

No matter our industry, we all need a new playbook on how to fight blatant workplace inequality – one that does not include platitudes, special programs or disingenuous Corporate Diversity Initiatives.

I’ve been there. It does not work.

There’s no telling whether Flores will win in court. But even at this early stage, it already feels like a win for those who are tired of endless talk and little sustainable action around hiring and promoting Black coaches and executives.

Undoubtedly, the lawsuit is an embarrassment that has further exposed the hypocrisy of a league that loves to come up with catchy “end racism” marketing campaigns that have no follow through. It’s been nearly 20 years since the sport launched a diversity initiative called the Rooney Rule to mandate teams to interview diverse candidates when hiring for some coaching and executive positions. And yet, there’s exactly one Black head coach in the league today: Mike Tomlin in Pittsburgh, and one Hispanic coach, Ron Rivera with the Washington Commanders.

Flores knows he stands on the shoulders of men like Colin Kaepernick, who in turn stood on the shoulders of three Black women, Patrisse Cullors, Alicia Garza and Opal Tometi, two of whom identify as queer. These women launched Black Lives Matter, a social justice movement that galvanized millions around the world and helped change laws and policies that were rooted in systemic racism. Their work is directly tied to the Civil Rights movement before them and the countless Black voices of dissent and protest that have echoed across the country since the first African was held in bondage.

I am encouraged by Flores’ commitment to fighting for equality. But he is only one man. And I’m hoping Flores won’t have to go it alone.

What we need is a critical mass of voices in the NFL to propel the league to change. This time, I hope Black players, who make up nearly 70% of the league’s workforce, recognize their power to do so and show up en masse. I’ve always believed they can be more than pricey pawns on the playing field. But they have to believe that too.

Up until now, it seems too many Black players have been content to bask in the glory of their 15 minutes of fame, cashing those golden checks until their bodies wear out or they are replaced by the next guy. And admittedly, they have that right.

But I have a message for Black players: If complacency is your game plan this time around, Godspeed. Many of us will still cheer for you – but only on game days.

Just do not expect us to care about your problems once you take off that helmet.

If you have not noticed, there’s a racial reckoning going on across America. People are sacrificing their lives, their livelihoods and their reputations to help uproot the hold systemic racism has on this nation. Black and Brown people from all walks of life see clearly now that assimilating into a toxic culture of systemic racism is no longer the assignment.

We can do better, be better, think bigger.

As Flores said, “This is bigger than football.”