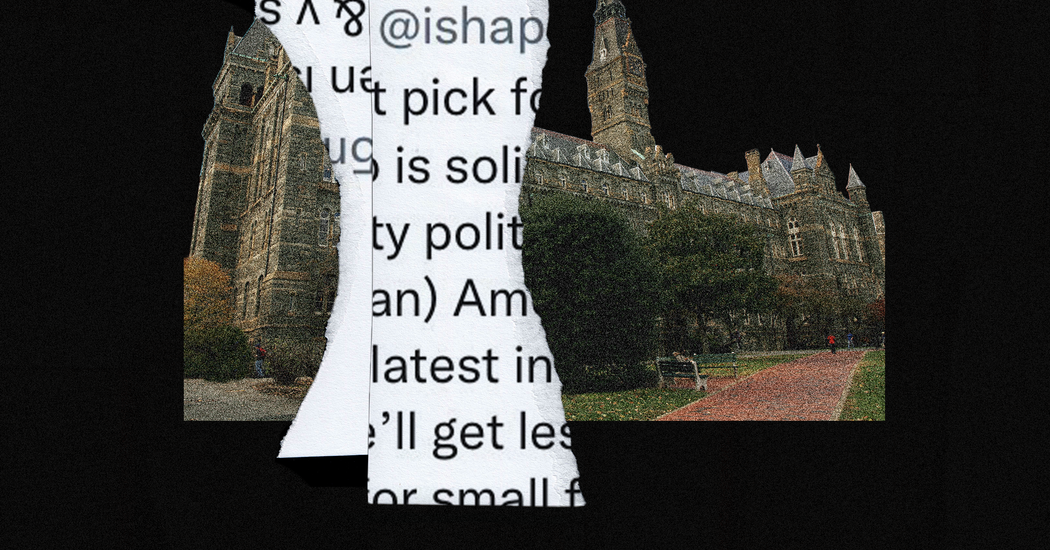 A libertarian constitutional law scholar named Ilya Shapiro sent out some ugly tweets last week. Shapiro, who’d recently been hired by Georgetown University’s law school, criticized Joe Biden’s pledge to nominate a Black woman to the Supreme Court, arguing that Indian-born judge Sri Srinivasan was “objectively” the “best pick.” But Srinivasan, wrote Shapiro, “alas does not fit into latest intersectionality hierarchy so we’ll get lesser black woman.” He claimed that if Biden considered only Black women, whoever he chose would always have an “asterisk attached.”

Many people were rightly incensed by Shapiro’s suggestion that a Black woman – any Black woman – would necessarily be “lesser.” It is, after all, far from unusual for presidents to consider issues of representation when making Supreme Court nominations. (Maybe I missed it, but I could not find any instance of Shapiro claiming that Amy Coney Barrett had an asterisk beside her name because Donald Trump promised to choose a woman to succeed Ruth Bader Ginsburg.) Shapiro’s tweets implied disdain not for a specific nominee, but for the entire universe of Black female jurists. He himself seemed to realize his tweet was indefensible; he apologized and deleted it.

That’s where the matter should have stayed. But Georgetown’s law school – where Shapiro was to serve as a senior lecturer and executive director of its Center for the Constitution – overreacted, placing Shapiro on leave pending an investigation into whether his tweets violated school policies on professional conduct, discrimination and harassment. Georgetown’s Black Law Students Association started a petition demanding his firing; as of Thursday morning it had more than 1,000 signatures. “Shapiro’s racist rhetoric and continued association with the university sends the visceral message that even if Black women attend the best law schools, hold the highest clerkships and serve on the most prestigious courts, they still are not good enough, ”it said.

I would not argue with anyone who interprets Shapiro’s insulting tweets that way. Nevertheless, it is a mistake for Georgetown to investigate or punish him, for two reasons, one abstract and one strategic. The abstract one is that however offensive Shapiro’s words were, they’re also the sort of political speech that should be protected by basic notions of academic freedom, which is why a number of people who detest what Shapiro said criticized Georgetown’s move. As The Atlantic’s Adam Serwer wrote“I’ve made my feelings about what he said clear but it’s impossible for academic institutions to fulfill their missions if they fire or punish people under circumstances like these.”

But punishing Shapiro for his tweets isn’t a bad idea just in principle. It also threatens to undermine the value of academic freedom at a time when that value is under sustained assault in many red states.

There’s recently been an explosion of censorship in conservative parts of the country, including prohibitions on the teaching of critical race theory and an orgy of school library book bans. So far, this censorship has mostly, though not exclusively, targeted K-12 schools. But that’s changing. As PEN America, a free speech organization, recently reported, “In 2022, educational gag orders are being aimed squarely at colleges and universities to exercise ideological control over what is being taught and read in classrooms and lecture halls.” Those who hope to counter this wave will need to appeal to broad standards of academic freedom. Any erosion of those standards is likely to redound against the left.

The audacity of some recent red state proposals is stunning. A new bill in Oklahoma forbids teaching that “one race is the unique oppressor in the institution of slavery” and that “another race is the unique victim in the institution of slavery.” It would apply to school districts and charter schools, as well as any type of state-funded online education or personnel of any “state agency.” According to Jonathan Friedman, director of free expression and education at PEN America, this wording encompasses higher education. “Public universities, public colleges, are state agencies,” he said.

A South Carolina proposal would, among other things, prohibit an instructor in any “state-funded entity” from teaching in a way that “advertises or promotes ideologies or sociopolitical causes or organizations.” The bill would create a hotline for people to report violations, similar to the one that Gov. Glenn Youngkin of Virginia has pioneered for K-12 schools.

“There were all kinds of bills last year that implicated colleges,” Friedman said. “What’s different here is the specificity and the Wild West nature of what is being proposed. You can just propose anything be banned in colleges in your state right now. ”

Of course, just because something is proposed does not mean it will be enacted into law. But when it comes to right-wing extremism at the state level, we’ve seen a consistent race to the bottom. “People really do start considering these things if you keep suggesting them,” Friedman said. “All it takes is one state to consider passing such a thing, or passing it, for it to have ramifications elsewhere.”

Texas’ abortion bounty law, for example, would have been hard to imagine a few years ago. Now it’s a model for far-right legislators in states including Arizona, Missouri and Ohio. With these increasingly outrageous attacks on free speech, Republicans are telling us where they want to take this country.

I am not naive enough to think that most Republicans will back off if they see liberal institutions upholding free speech protections for conservatives. A segment of the right has given up on liberal democracy and openly venerates authoritarians like Hungary’s Viktor Orban, who, not coincidentally, targeted the teaching of “gender ideology” in much the same way American conservatives have targeted critical race theory.

But progressives will need allies if they’re to have any hope of mounting a political response to this new mania for academic repression. That requires some intellectual consistency. You can not appeal to a transcendent ideal in one part of the country while traducing it in another. At least, you can not do it and expect to convince anyone who does not already agree with you.