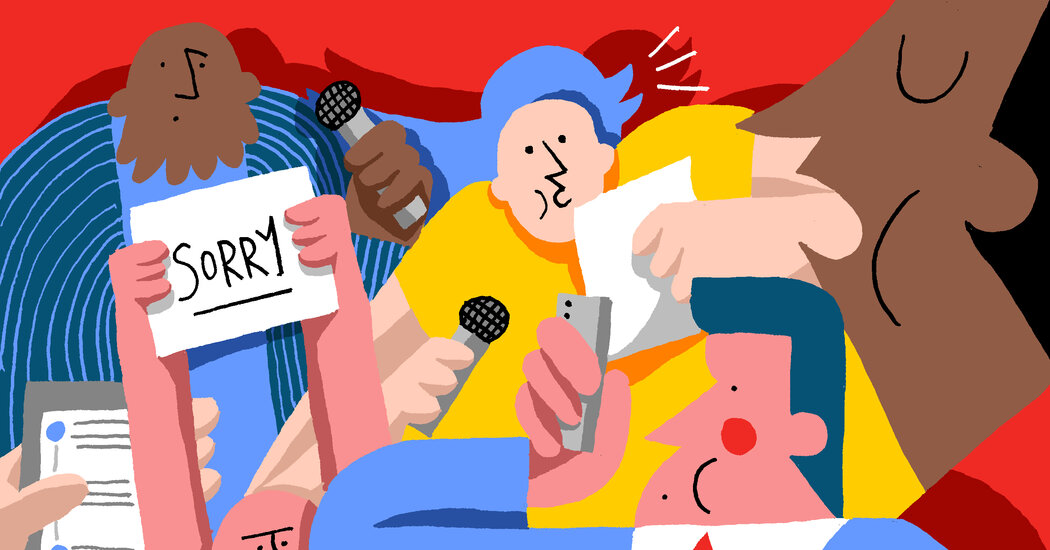 It can feel these days like we are swimming in a sea of ​​ostensible contrition. But something strange has happened in the process. Instead of leaving us feeling healed, or as if there is a rightful place for accountability in our world, all this apologizing seems to, instead, have had a flattening effect. Everyone is sorry, yet at the same time, no one’s apology feels like enough.

Apologies for major offenses at times hardly register; those for microharms – that books-in-bars guy delivered a lovely apology, but did he need to? – vein laudedwhile others (from, say, an Oklahoma congressional candidate who puked into a girl’s shoe during a visit to a tween slumber party, where she accidentally got blackout drunk) feel almost too humiliating to treat as national news.

And an apology’s sincerity, it seems, often has little to do with any subsequent punishment. Why did Ms. Goldberg – who, by all accounts, followed the textbook formula for a good apology, doing so twice, then enlisting the help of the Anti-Defamation League to make amends – receive a two-week suspension from her job, while Joe Rogan, who called his repeated use of the N-word “the most regretful and shameful thing that I’ve ever had to talk about publicly,” received no penalty?

This is not the first age of apology. Nor is it the first in which public apologies have been deemed insincere.

And yet, something about this era of contrition feels different.

It’s not exactly the speed at which the apologies are incoming, though that’s part of it. (With each edit of this Opinion piece, a new apology has emerged. The latest – or, at least, one of the latest – came from Rosie O’Donnell, for assuming that Priyanka Chopra and Deepak Chopra were related, which they are not . Ms. O’Donnell apologized but while doing so seemed to not remember Ms. Chopra’s first name, for which she issued a second apology, which Ms. Chopra declined to accept.)

It’s more than the disembodied way in which such apologies are delivered, though that’s a factor too. (Ms. O’Donnell’s was on TikTok, and Ms. Chopra responded in Instagram stories.)

Perhaps it’s public apologies, no matter how insincere, once seemed to serve a social function: They established our societal red lines, they showed us that even the powerful could be held responsible for their actions, and the act of apologizing itself, with all the discomfort and squirming involved, often seemed like real punishment. “It was an admission of defeat as much as an admission of guilt,” said linguist Deborah Tannen.