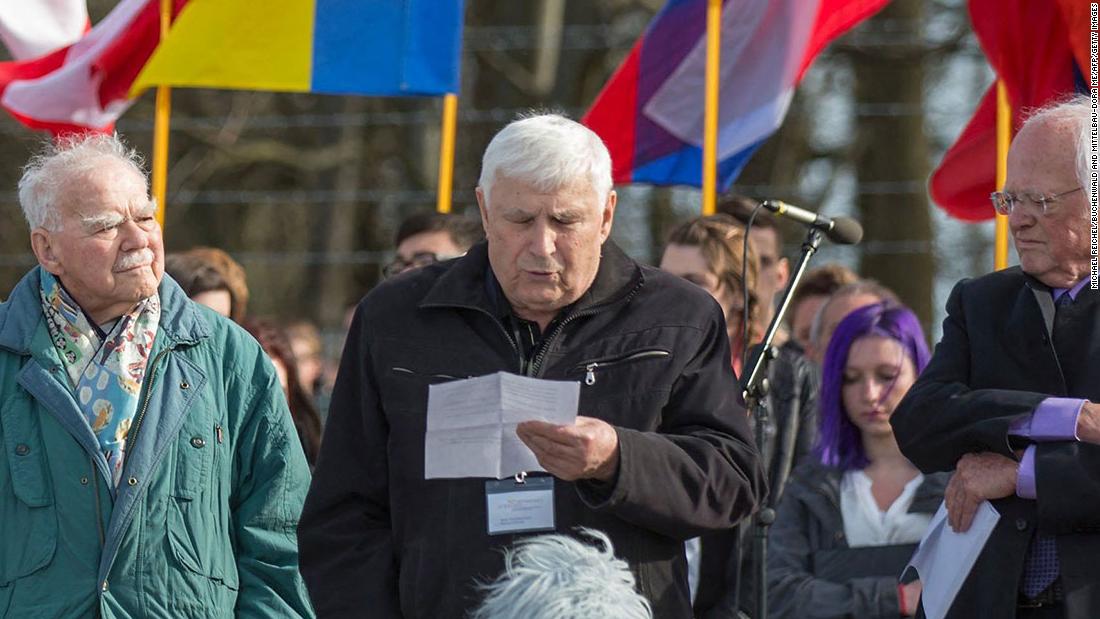 Romantschenko was 96 years old. In the concentration camp he had fought with his fellow Russian prisoners against the SS. Since his liberation in 1945, Romantschenko had been committed to preserving the memory of Nazi terror and to peace. Now, this brave man, whose mother tongue was Russian, has become a victim of the Russian invasion of Ukraine – a tragedy and a shame.
Romantschenko was born in 1926, in the village of Bondari in the Sumy Oblast of Ukraine. In late 1942, a year-and-a-half after the German invasion of the Soviet Union, the occupiers deported all the men in his village, some as young as 16, to Germany to perform forced labor.
Romantschenko, who was only 16 at the time, was sent with other villagers to Dortmund, where he was forced to work in an underground coal mine. He tried to escape from the camp, but was arrested by guards and police at the Dortmund freight station. He passed through several prisons before the Gestapo – the German secret police – deported him to the Buchenwald concentration camp near Weimar in late January 1943. He was forced to do hard labor in the quarry there.
In June 1943, the SS transferred him and nearly 200 other prisoners to Peenemünde on the Baltic Sea island of Usedom. The prisoners had to assemble the V2 rockets developed by Wernher von Braun, which were used to bombard London and Antwerp in 1944. After a British air raid on Peenemünde in August 1943, which also killed concentration camp prisoners, the rocket assembly was transferred to an underground tunnel facility in the Harz Mountains: the Mittelbau-Dora concentration camp.
The SS moved the prisoners, including Romantschenko, from Peenemünde, to the Harz Mountains, where they worked and lived underground. Four-tier wooden cots in a 50-meter-deep tunnel served as accommodations. The prisoners called the underground concentration camp the “Hell of Dora.”
Romantschenko survived this hell, which had been marked by hunger, illness and abuse. He also survived a death march to the Bergen-Belsen concentration camp in April 1945. British troops freed him there on April 15, 1945, but he was not allowed to return home just yet.
In the Stalinist-ruled Soviet Union, Soviet concentration camp prisoners and prisoners of war who had survived this ordeal were suspected of having collaborated with the Germans; their survival in the hands of the enemy was deemed suspicious. Like so many other Soviet concentration camp survivors, Romantschenko was forced to serve as an occupying soldier in the Red Army in East Germany. He was expected to prove himself there and demonstrate that he was an upright Soviet citizen. He was not allowed to return to his home in eastern Ukraine until 1950.
Back in Ukraine, Romantschenko had a day-job as a typist; in the evenings he studied mining engineering and successfully earned a degree. He later designed farming machinery. Following the collapse of the Soviet Union, he began to speak openly about his experiences as a prisoner in the German concentration camps. He traveled to Germany many times and participated in commemorative events at the Buchenwald and Mittelbau-Dora memorials.

Romantschenko spoke to schoolchildren about his experiences and urged us to safeguard peace and freedom and to protect human rights. “I wish you the best of luck from the bottom of my heart, and I hope that no one ever has to go through what we former prisoners experienced,” he said in 2013, speaking from the roll call square of the memorial on the anniversary of the liberation of the Buchenwald concentration camp.

At the time, no one could have imagined that – nine years later — Romantschenko, who had survived the concentration camps and Second World War, would be killed in a Russian air strike. He is survived by his son and granddaughter, who lovingly cared for him over the last months when fear of the Coronavirus had forced him to stay in his apartment.

Hitler could not defeat our friend Boris. Now another fascist dictator, Vladimir Putin, has killed him. But Putin is not a new Hitler. Despite all the outrage over the ruler in Moscow, who ordered the invasion of Ukraine and is not squeamish about brutally oppressing his own people, we should be careful not to draw false historical analogies between Nazi terror and the crimes committed by Putin and his vassal states .
The Holocaust and other Nazi crimes were singular events committed in a specific historical context, and we should be wary of relativizing these events. Yet, we do not need comparisons with the Holocaust to express our outrage at the current crimes of Russia’s leadership. It also should be clearly stated that Putin’s claim of wanting to “denazify” Ukraine is a brazen lie created to justify his aggressive imperialism, a lie rooted in the 19th-century idea of ​​a Greater Russia.

The absurdity of this lie is demonstrated by the thousands of Ukrainian survivors of Nazi terror who fought with their Russian comrades against the Nazis in the Second World War and who are now being threatened and, in the case of Boris Romantschenko, murdered by Russian bombs.

It is a tragedy and betrayal of the legacy of the survivors of Buchenwald who, in 1945, stood on the roll call square of the liberated camp and swore they would build a world of peace and freedom.