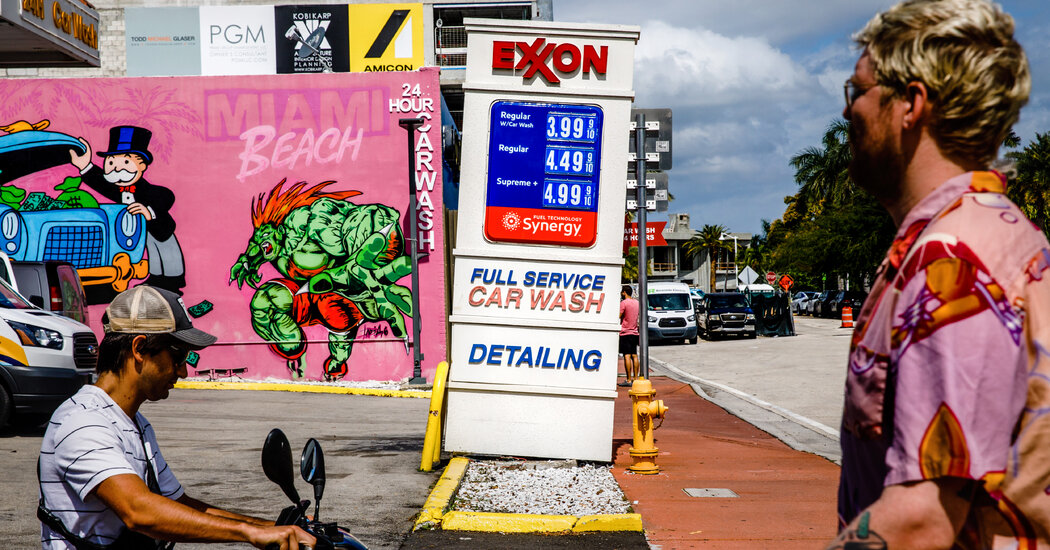 On one side, there’s a lot of disruption: rising oil and food prices (made worse by Russia’s invasion of Ukraine), snarled supply chains and so on. These factors are the reason inflation is way up everywhere, not just in America. For example, here’s Britain:

On the other hand, the US economy is running very hot, with widespread labor shortages. You can see this overheating in lots of data, but it’s also visible to the naked eye. Here’s what I saw on the roads of New Jersey the other day (do not worry, my wife was driving):

So far, at least, there’s no sign of a third possible factor: inflation driven by entrenched expectations of inflation – in which businesses raise prices because they believe other businesses will raise prices. But that factor could emerge if inflation stays high, so prudence demands that we try to rein in prices now. And while the disruptions will fade over time (there are already hints of improvement in supply chains), it pains me to say that we can not safely let the economy keep running this hot.

The reason this pains me is that there are many very good things about a tight labor market in which jobs are easy to find. A buoyant job market is especially important for the young: Recent graduates who have the misfortune to enter a weak market can suffer long-term damage to their career prospects.

Unfortunately, we do need some cooling off. What I’m not sure people realize is the extent to which policies and events have already set the stage for the big cool-down.

Start with the Federal Reserve, which is under widespread attack for being behind the curve. It’s true that so far, the Fed has raised short-term interest rates – which are what it directly controls – by only a measly 0.25 points.

And long-term rates reflect not just what the Fed has already done but also what it’s expected to do. The Fed’s pivot to inflation fighting has already sent long rates – especially mortgage interest rates – way up:

This by itself is going to slow construction and substantially cool off the economy.

Then there’s fiscal policy. A year ago, the American Rescue Plan provided families with a lot of financial aid: one-time stimulus payments, enhanced unemployment benefits and an expanded child tax credit. All of that is now in the past; the last piece of that spending, the child tax credit, expired at the beginning of this year. Like it or not (and mostly I do not), this cutoff of federal aid is likely to weaken consumer spending.

Finally, Vladimir Putin’s decision to raise food and fuel prices – OK, he was actually trying to conquer a neighboring democracy, but driving up prices has been his main accomplishment so far – is already weighing on family budgets, probably leading to lower spending on other things.

You might wonder whether higher oil prices will really be a drag on the US economy. We are, after all, more or less self-sufficient in oil:

And we’re a net exporter of food. So why should higher oil and food prices make America poorer? The answer is that on average, they do not; while they make many Americans poorer, they also make some other Americans richer. But it’s a good bet that those who are made poorer will cut their spending more than those who are made richer will increase it. In particular, while oil companies have suddenly become much more profitable, the disastrous excesses of the shale bubble have made them reluctant to increase investment and production.

To put all of this together: Policy and events are seriously putting the brakes on the rapid expansion the US economy has experienced since the pandemic recession. So I’m much less worried than many observers that the Fed is behind the curve in responding to an overheated economy. If anything, I’m starting to worry that the Fed may find itself behind the curve as the economy cools off more rapidly than its board members seem to expect – will the unemployment rate really be only 3.5 percent at the end of this year?

And yes, I’m aware that it’s mixing metaphors to say that the economy is cooling down because we’s hitting the brakes. Deal with it.

Some people are really, really worried.

The head of the National Republican Senatorial Committee denounces his own words as “Democratic talking points.”