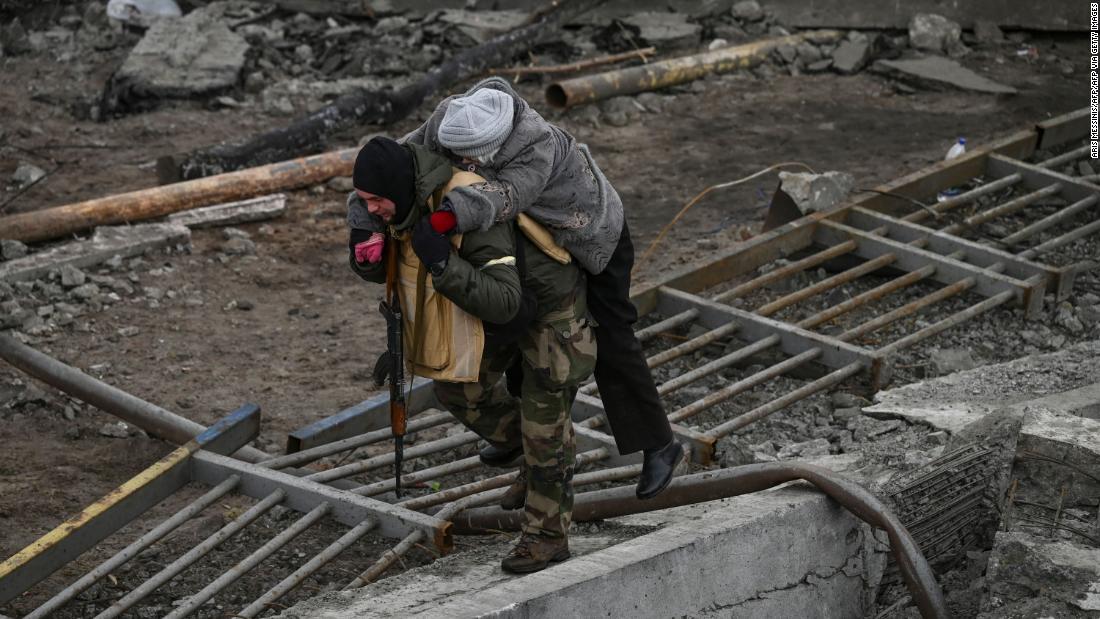 In front of the Taras Shevchenko National University of Kyiv, a statue of its namesake Ukrainian poet is completely hidden behind protective scaffolding. Meanwhile the red-brick university building is shielded by sandbags and armed guards, with not a teacher or student in sight.

Normally during Shevchenko’s gaze, especially this time of year, students can be seen in the park socializing or cramming for classes.

While life is slowly returning to Kyiv it will likely be months before it’s anything resembling normality. Whether it is the capital, which appears a city in an induced coma – or the bombed-out towns of Bucha and Borodyanka which are now mass crime scenes – it is clear that so-called biting Western sanctions have been unable to stop Putin’s war machine.

Key will be pivoting a failed Western policy of appeasement to meet Putin’s aggression with a much more robust military response. That includes giving the Ukrainians the ability to protect their own skies with anti-missile batteries.

Even here in Kyiv, in north-central Ukraine, there are daily reminders of the long reach of Russian aggression, with frequent air raid sirens sending the few residents who remain into bomb shelters.

As long as Moscow has the ability to send deadly long-range cruise missiles anywhere onto Ukrainian territory, no city, town or village can be declared safe.

A little over one month into the war, the horrors committed by Russian troops in Kyiv and elsewhere have shocked the world and marked a grim new chapter in Vladimir Putin’s invasion.

“Russian soldiers raped me and killed my husband,” one woman told BBC reporters. CNN’s Clarissa Ward reported on a pair of villages that were occupied by Russians for more than a month and found “endless accounts of horror, executions, arbitrary detentions and more. “
There are more horrifying accounts of hundreds of women and children being taken away to Russia against their will. These people are reportedly taken to “filtration camps” where they are identified, presumably in an attempt to prevent them from revealing the truth about the atrocities they have witnessed at the hands of Russian soldiers.
As if the atrocities in Bucha and other communities around Kyiv were not enough, a missile strike on a crowded train station in eastern Ukraine last week claimed the lives of at least 50 people, including five children. On the remnants of one of the missiles was a spray-painted message which grotesquely read: “For children.”
Sadly, more tales of butchery are likely to come. Putin has appointed at the helm of the new phase of the war a general with a record of inflicting even more brutality (if that’s possible) – Aleksandr Dvornikov, who became known as the “butcher of Syria.”
With each passing day it seems that discoveries of the brutal Russian occupation reach the absolute boundaries of human comprehension and tolerance. And yet, more atrocities emerge – prompting the predictable narrative of outrage from Western leaders that stops short of providing Ukraine with what it needs to bring to an end Putin’s savagery.
It is worth repeating that Ukrainians have been living with hybrid war since 2014, when Russia illegally annexed Crimea and invaded the Donbas with heavily-armed separatists. Some Ukrainians tell me they are not surprised by what the Russians are capable of.

Over the course of 2014 and 2015, I saw with my own eyes the evidence of Russian brutality – villages completely ransacked, schools and cultural and religious complexes destroyed. The corpses of entire families lying in the fields of Donetsk after the MH17 airliner was struck by a Russian BUK missile on July 17, 2014 was a sickening scene eternally etched in my mind.

But each of Putin’s escalations that are not met by direct Western force only serves to embolden him further. Sanctions are clearly not effective. Will it take the complete annihilation of Ukraine before Western leaders finally say enough is enough and take direct action?

In the meantime we are left with half measures, with the Biden administration stopping short of giving Ukraine the weaponry it needs. (The White House says the US and NATO are providing Kyiv with weapons at a historic pace). It may be “historic,” but has failed to knock Putin off course.

As the West dithers on where to draw its own red lines when it comes to Russian atrocities in Ukraine, a behind-the-scenes geopolitical ballet is playing out between Ukraine and likeminded neighbors working out their own micro alliances and military deals.

Expect to see Kyiv forge arrangements with neighboring NATO members and potential members who legitimately see themselves in the crosshairs of Putin’s missile launchers. Slovakia, for example, is reported to be preparing to transfer key Soviet-era missile defense systems to Ukraine with the expectation that its stock will be backfilled by western partners. Why this has not been done earlier by the US and its allies is difficult to comprehend.

For now, it appears that Russia is refocusing its efforts on expanding its footprint in the Donbas, by taking over the government-controlled eastern areas of Donetsk and Luhansk.

Massive efforts will be expended to further secure the coveted land corridor linking mainland Russia with occupied Crimea. Part of that latter effort will be to flush the despised far-right Azov Battalion out of the besieged city of Mariupol, mostly by flattening it with unrelenting bombardment.
Some pundits have suggested that Putin is aiming to achieve measurable gains in Ukraine in time for the May 9 Victory Day parade in Moscow. The thought of countless lives being slaughtered so Putin can make his deadline is almost too grotesque to contemplate.
In the meantime, Ukrainians will likely tire of waiting to see where the West’s red lines are when it comes to brutality in this war. While the United Kingdom said that the use of chemical weapons by the Russian side will mean “all options are on the table,” that type of language is beginning to be taken here as little more than virtue signaling.

It’s time for world leaders posing for selfies with Ukrainian President Volodymyr Zelensky in Kyiv, to back up the photo ops with real action against Putin’s killing machine.