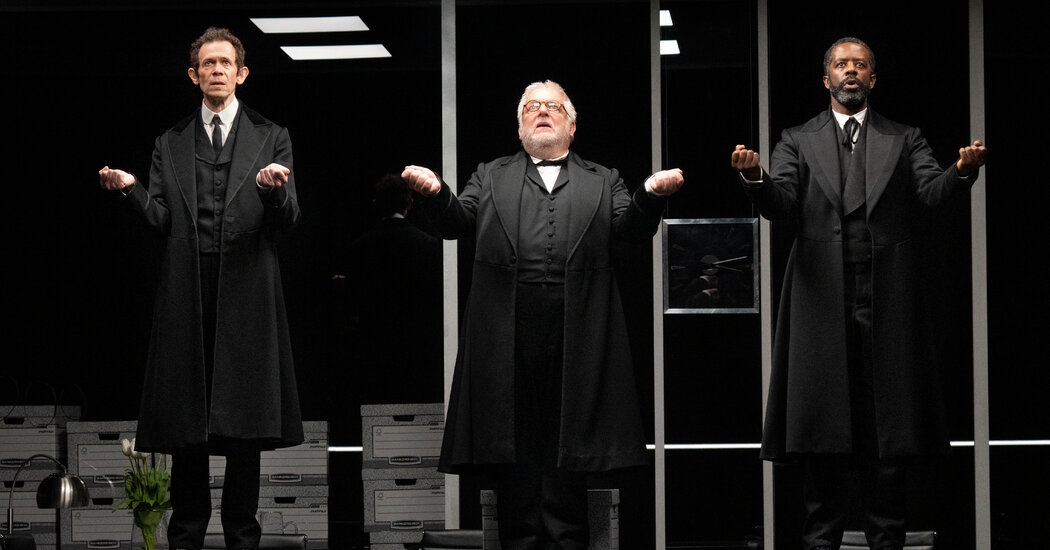 Adrian Lester, a British actor from Birmingham and the son of two immigrants from Jamaica, was nominated last week for a Tony Award for his performance in “The Lehman Trilogy” as Emanuel Lehman, one of the German-born Jewish founders of the fallen investment behemoth Lehman Brothers. Lester, like the other actors in the three-man play, takes on several parts, including female characters and at one point, a thumb-sucking toddler.

There has been no outcry about a British actor of African descent playing a German Jew, nor was there any fuss when he played Bobby, a character traditionally performed by white actors, in a London production of Stephen Sondheim’s “Company,” for which he won and Olivier.

And why should there have been? It’s called acting.

There was no protest either about Lester’s co-star Simon Russell Beale, born to British parents in what was then British Malaya and a former chorister at St. Paul’s Cathedral, playing a German Jew. Adam Godley, the third actor in the play, is Jewish in real life, but he’s also bisexual – not so in the play. Again, it’s called acting, and Beale and Godley were also nominated for the Tony Awards last week.

And yet countless actors have been criticized for playing people they do not resemble in real life.

Earlier this year, Helen Mirren was lambasted for portraying Golda Meir, a former prime minister of Israel, in a forthcoming biopic even though she’s not Jewish – engaging in what is now called “Jewface.” In a recent interview defending Mirren, Ian McKellen (who incidentally has played everything from a wizard to a cat) asked, “Is the argument that a straight man can not play a gay part, and if so, does that mean I can not play straight parts? ” He went on: “Surely not. We’re acting. We’re pretending. ”

Daring to take on parts different from oneself did not always kick up a storm. Back in 1993 when Tom Hanks played a gay character in “Philadelphia,” he was hailed as a brave for taking on homophobia and won an Oscar. Today, his performance no longer plays so well in some quarters. “Straight men playing gay – everyone wants to give them an award,” the performer Billy Porter complained in a 2019 actor’s round table. Yet many of our best gay, lesbian and bisexual actors – Jodie Foster, Alan Cumming, Kristen Stewart, Nathan Lane – have won awards for straight roles without even a murmur of complaint.

What we are effectively saying here – without ever, heaven forbid, saying it out loud – is that it’s OK for actors from groups considered to be marginalized – whether gay, Indigenous, Latino or any other number of identities – to play straight white characters. But it’s not OK for the reverse.

Such double standards may not trouble you. But if it’s a problem that a “miscast” actor – one who differs in identity from the character – takes a role away from a “properly cast” actor when there are already fewer roles for underrepresented or marginalized groups, then why not condemn Simon Russell Beale for taking a job from a Jewish actor? Why not outcry every time a 40-something actress bends biology to play the mothers of 25-year-old actresses, robbing older actresses who more plausibly fit the part?

If, however, the real problem is actors not being able to understand what it feels like to be part of a demographic group or to have a sexual orientation outside the confines of their own experience, then none of these actors should be able to play anyone unlike themselves. In other words, no one should ever be allowed to play a part.

Hollywood has wisely moved on from the offensive extremes of blackface and Shylock stereotypes, “queeny” stock gay characters and Mickey Rooney’s embarrassing turn as a Japanese landlord in “Breakfast at Tiffany’s.” There is plenty of room in the middle without ricocheting to the other undesirable extreme.

It’s not that strict typecasting should never happen; it can yield rewarding opportunities for both actors and audiences. Behold the deaf performers in the Oscar-winning “Coda.”

But deaf performers can also act movingly in a musical like the 2015 Deaf West revival of “Spring Awakening,” which featured them in roles that were originally performed as hearing characters and performed simply as characters, neither explicitly hearing nor deaf, but transcendently human in their expression.

Likewise, in a recent revival of “Oklahoma,” Ali Stoker, who uses a wheelchair, was able to fully embody Ado Annie, who spends much of her time in the movie and previous stage versions swishing away from her suitor, Will Parker, just as Daniel Day-Lewis once captured, with extraordinary sensitivity in “My Left Foot,” the wheelchair-bound writer and painter Christy Brown.

Good actors are able to find a way to portray people who are not like themselves, whether on the surface or well below, which is what differentiates them from those of us who could barely remember our lines in a fourth-grade production of “A Charlie Brown Christmas. ” Acting is a feat of compassion and an act of generosity. Those capable of that kind of emotional ventriloquy enable audiences to find ourselves in the lives portrayed onscreen, no matter how little they may resemble our own.

Bravo to those actors who do that well. Bravo to the talented Adrian Lester, who makes you forget the color of his skin, his nationality and his religion – and gives himself over entirely to his performance. There is no reason for any actor to apologize for exercising and reveling in his craft.