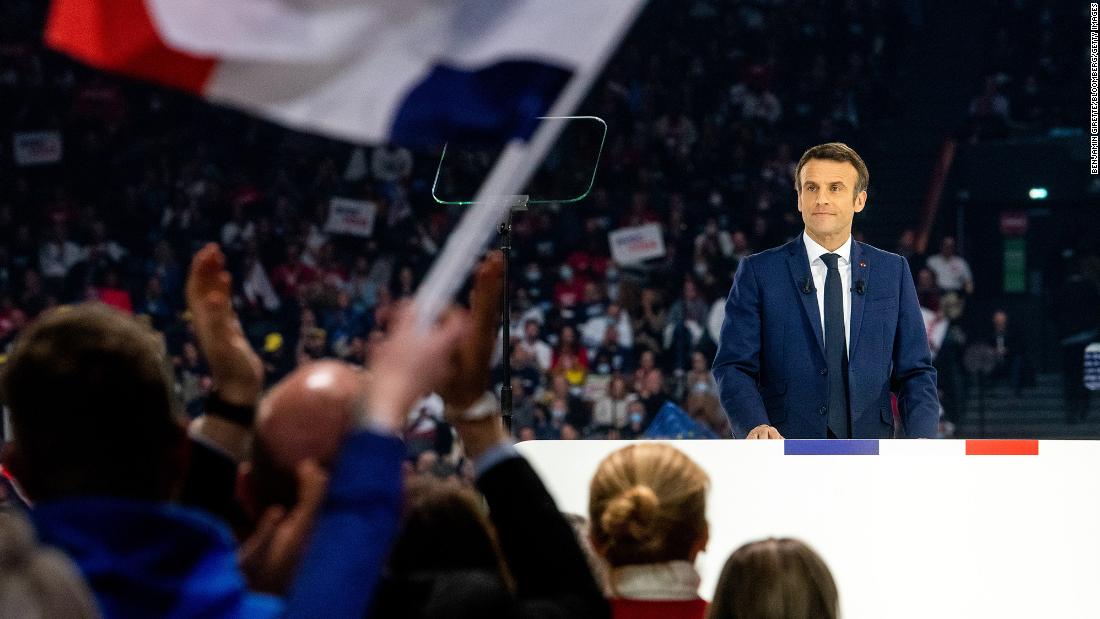 Mounting the vast white stage, thousands of light sticks glimmering from the blackness in the crowd, French President Emmanuel Macron was in his element. This was his moment. And for two hours on Saturday, he held his supporters spellbound with a recitation of his accomplishments of the last five years, his hopes and dreams for a second term.

For much of France’s four-month-long presidential race, Macron looked like a shoo-in to become the first French president in 20 years to win reelection. Now his lead is not quite so comfortable.

Suddenly, Marine Le Pen of the far-right National Rally, on her third attempt for the presidency, is surging in the polls and Macron looks worried. Latest polls show the margin between the two candidates narrowing to just 5% of votes.
But most troubling are reports that as many as 30% of the electorate may simply stay home on Sunday during the first round of the French presidential election. The top two candidates here will later face off in the final runoff on April 24.
While Macron has remained in the lead throughout his election campaign, the candidate most likely to face him has been less obvious. Early on in the race, three women from the principal axes of the political spectrum were vying to become France’s first female president.
They were Anne Hidalgo for the center-left Socialists; Valérie Pécresse for the center-right Republicans; and Le Pen. The first two faded sharply in recent polls, threatening to also take down the two parties they represent that have been the staples of French politics for much of the post-Second World War era.

Only Le Pen has essentially been left standing. And she is the focus of media attention and the fears of Macron’s camp.

Macron’s early assurance began to turn when the Ukraine crisis erupted at the very moment France was assuming the rotating six-month leadership of the European Union. Macron had quite rightly painted himself as the West’s Putin-whisperer, an irreplaceable figure who could hold the Kremlin at bay or at least serve as the one reliable avenue into the mind of the Russian dictator.

Macron had hoped to coast into a second term in that role, remaking Europe in the French image and himself as its powerful, focused leader in the wake of the retirement of German Chancellor Angela Merkel. None of this worked out quite as he’d hoped.

Instead, Europe has been plunged into the worst conflict on its continent since the Second World War. Macron, first in Herculean efforts to avert a Russian invasion, then equally energy-consuming attempts to unite Europe behind sanctions while seeking some route to a ceasefire, diverted his attention for crucial weeks as the presidential campaign built to a crescendo – all largely in his absence.

Meanwhile, back home, Le Pen was quietly focusing her efforts on the pocketbook issues that French families care about most deeply – especially inflation, now passing 4.5%, more than triple the level a year ago.
Without suggesting how she’d pay for this, Le Pen wants a drop in VAT to 5.5% from the current 20% (zero for essentials like pasta and diapers) and no income tax for anyone under 30.
But lurking in the wings, is Le Pen’s long-standing flirtations with Putin’s regime and campaign loans from Russian banks. Not to mention her suggestions that France might do better outside the European Union or even NATO.
Certainly, Macron did not entirely misread the concern of French voters over Russian atrocities in Ukraine. But in the mind of most French these are still a distant second behind “purchasing power.”
Indeed, an article in France’s leading Sunday newspaper Journal du Dimanche this weekend outlined “The 10 plagues that threaten Emmanuel Macron” – No.1 being inflation.

But also high on the list, is the President’s continued flirtation with the third rail of French politics – raising the retirement age to 65 years. When Macron first floated this nearly four years ago, the very idea sent hundreds of thousands of demonstrators into streets across France – the “yellow vest” movement that nearly destroyed Macron’s first term.

Undeterred, he’s raised the issue again in this year’s election platform. Le Pen meanwhile, wants to drop the retirement age to 60 from 62.

With the countdown on election day, Macron has refused to take part in any televised debate with the 11 other candidates standing against him in the first round on Sunday. Though he has agreed to debate one-on-one with whoever might be the other candidate in the second round two weeks later.

Still, if there is one very important constant in French politics, it’s voters’ deeply held views of history, especially their own. The Nazi occupation of France is still very much part of the nation’s DNA, even with few alive today who directly experienced these horrors. The thought of returning to a hard-right regime again is anathema to many.

Time and again, the French have refused to turn their country over to any individual too far out of the mainstream. Le Pen lost five years ago to Macron in the second round. Just as her father Jean-Marie Le Pen did in 2002, losing in an 82% to 18% tsunami against Jacques Chirac, one of five times Le Pen ran under the far-right National Front banner.
The French, despite their constant flirtation with extremes, invariably penalize any politician who veers dramatically from the mainstream, promising revolutionary change. So this year’s leading left-wing candidate, Jean-Luc Mélenchon, who has suggested overhauling the French constitution entirely, still languishes in fourth place in polls.

In the end, Macron should be counting on one fundamental difference between French and American democracy. In France, the presidential candidate with the largest number of votes wins – there is no electoral college.

Macron understands this, which is why in his declarations at his rally last Saturday and various campaign appearances, he has been trying his best to scrape votes from the far-left and far-right, knowing only one of them will be in the final runoff . Effectively, he is running a second-round campaign before the first is even finished.

In the end, why should Americans or anyone outside of France care so deeply about this? Because if any of Macron’s most vigorous challengers from the left or right wins, the very foundations of western democracy risk being shaken to the core – as profoundly as Donald Trump ever did. Le Pen really does want Frexit (exit from the EU), and France out of NATO. The question is how many French will want to risk that, particularly with a war virtually on their doorstep.