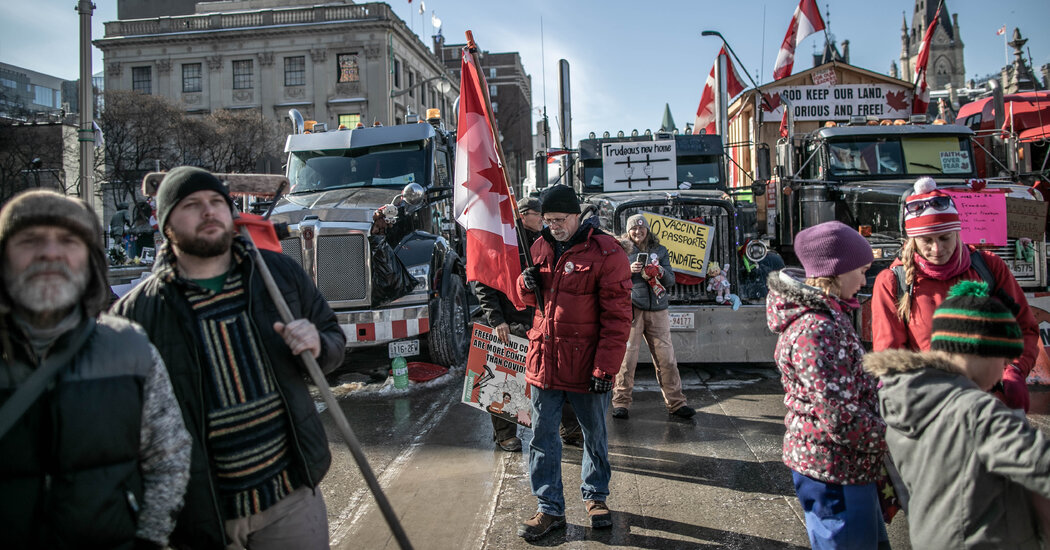 By the standards of mass protests around the world, the “Freedom Convoy” snarling Downtown Ottawa ranks as a nuisance. The number of protesters, about 8,000 at their peak, is modest; there have been no serious injuries or altercations, the truckers stopped blaring their horns after residents got a temporary court injunction against them, and most Canadians support neither the truckers nor their cause. Yet what’s happening in Canada deserves close attention in the United States and across the world.

In an increasingly polarized political environment, the Canadian truckers became an instant cause celebrity. Donations poured in, prompting GoFundMe to pull the plug on the campaign after a few days under a policy that “prohibits the promotion of violence and harassment,” a void that was quickly filled by right-wing crowdfunding platforms. Copycat convoys have appeared as far afield as Australia and New Zealand.

Inevitably, a chorus of cheers arose from south of the border, led by Donald Trump’s declaration that “the Freedom Convoy is peacefully protesting the harsh policies of far-left lunatic Justin Trudeau who has destroyed Canada with insane Covid mandates,” referring to the prime minister. Senator Ted Cruz called the Canadian truckers “heroes”; Elon Musk tweeted, “Canadian truckers rule”; Representative Marjorie Taylor Greene suggested that the “corporate Communists” at GoFundMe should be arrested.

Opinion Conversation
Questions surrounding the Covid-19 vaccine and its rollout.

The raucous images from Canada, a country widely regarded as a model of calm, tolerance and reason, demonstrate the worrisome degree to which Covid-19 mandates and other regulations have become a potent, and perhaps lasting symbol, for the far right of what they see as governmental assaults on their “freedoms.” The Canadian truckers initially launched their convoy in late January to protest the requirement that those crossing the Canadian-US border must be vaccinated to avoid a 14-day quarantine. That in itself was a minority cause – only about a tenth of cross-border drivers are not vaccinated, according to the Canadian Trucking Alliance, which disavowed the protest. (And 86 percent of Canadians as a whole have received at least one shot.) A survey by the market research firm Leger found that 65 percent of Canadians believe the Freedom Convoy represents only a “small minority of selfish Canadians.”

As the big rigs brought traffic to a crawl in the Canadian capital and began blaring their horns, Canadians who do not share their grievances began to call for an end to the protests. The Ottawa police chief called it a “siege,” the Ontario premier said it was an “occupation,” the Ottawa mayor declared a state of emergency, and on Monday, Mr. Trudeau angrily told Parliament that the protests have to stop. He stopped well short of authorizing the use of military force against them but went as far as to say the protesters are “trying to blockade our economy, our democracy and our fellow citizens’ daily lives.”

We disagree with the protesters’ cause, but they have a right to be noisy and even disruptive. Protests are a necessary form of expression in a democratic society, particularly for those whose opinions do not command broad popular support. Governments have a responsibility to prevent violence by protesters, but they must be willing to accept some degree of disruption by those seeking to be heard. The challenge for public officials – the same one faced by Minneapolis and other cities in 2020 during the protests after the murder of George Floyd – is to maintain a balance between public health and safety and a functioning society, with the right to free expression. Entertaining the use of force to disperse or contain legal protests is wrong. As Mr. Trudeau said in November 2020, expressing his support for a yearlong protest by farmers in India that blocked major highways to New Delhi, “Canada will always be there to defend the right of peaceful protest.”

The convoy has captured an underlying frustration in a broad swath of the Canadian public. Like the “gilets jaunes” (yellow vests) movement in France that clogged the streets of Paris and other cities for months in late 2018 and early 2019, the Canadian truckers are motivated by anger over a wide variety of grievances that cannot be easily resolved through negotiations. Their power lies in their ability to disrupt through social media, using images of a few thousand people immobilizing a national capital and hampering international trade to mobilize global support.

The yellow gilets, however, never found a cause with wide appeal. The Canadian truckers have, and their success in turning coronavirus restrictions into a rallying cry for the disaffected is what makes the Ottawa protest significant. In France, a convoy of dozens of trucks and other vehicles, inspired by the Ottawa protests, headed to Paris from southern France on Wednesday, prompting the police to announce a ban on such protests as a risk to public order. A US group calling itself “Convoy to DC 2022” has announced an American version of the protest for next month, though Meta quickly removed the group’s page from Facebook for violating its policies on spreading vaccine misinformation.

These nascent efforts pose a challenge for Mr. Trudeau, President Biden and every other leader searching for ways to restore a degree of normalcy while maintaining defenses against a disease that still has the power to fill hospitals and kill in large numbers. Effective leadership in this stage of the pandemic means finding ways to confront the understandable frustrations and legitimate protests engendered by the pandemic without stoking more strife, compromising the rule of law or succumbing to unreasonable demands. With populists like Mr. Trump primed to attack any Covid-19 action by the government as an assault on “freedom,” safely exiting the pandemic will be that much more treacherous. Allowing nonviolent, even if disruptive, protest is an important tool for maintaining social cohesion in a polarized society.