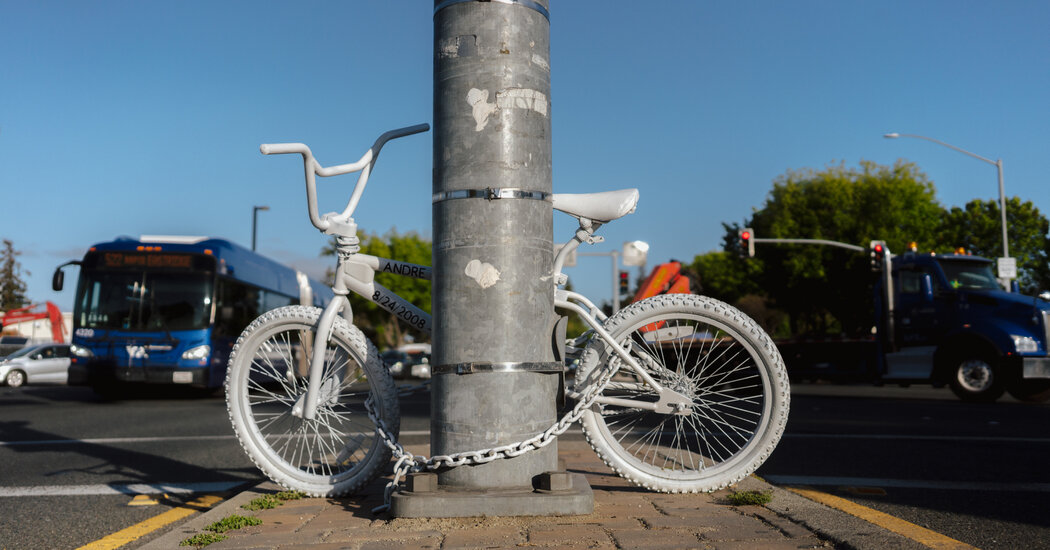 MOUNTAIN VIEW, CALIF. – At about 8:15 am on a Thursday morning in March, Andre Retana, a 13-year-old riding his bike to middle school, pulled up to a red light at the intersection of El Camino Real and Grant Road in this Silicon Valley suburb.

Near two major state highways, the El Camino and Grant crossing is one of the area’s busiest and most dangerous sections of roadway. The intersection lacks dedicated bike lanes and other features to protect bicyclists and pedestrians from fast-moving motor vehicle traffic. Instead the intersection is an asphalt-and-concrete love letter to cars. Gas stations occupy two corners; an America’s Tire store sits on a third, a BMW dealership on the fourth. Its traffic design, too, prioritizes the efficient movement of cars and trucks over other uses of the road. To keep traffic humming along, motorists on all of its corners are allowed to turn right on red lights.

As Andre approached the intersection’s southeast corner, he rode alongside a construction truck waiting at the light to turn right. A police investigation would later determine that the truck had come to a complete stop at the red light. Police say the truck driver, high up in the cab, had never seen Andre, who was in the truck’s blind spot.

Then, in a catastrophe of timing, Andre fell off his bike in the crosswalk near the front of the truck – just as the driver, with the light still red, decided it was safe to began turning right. The truck hit Andre. The driver, whose identity has not been released, realized he’d been in a crash only after bystanders flagged him down. The boy on the bike suffered severe injuries, and died in a hospital a short while later.

Police found no evidence of wrongdoing and concluded that the death was an “extremely tragic incident.” They said the driver, whom they described as “devastated,” was not speeding or under the influence of drugs or alcohol, and had executed his right turn legally. Andre, too, appears to have followed all the rules of the road.

It is tempting to call what happened that morning in Mountain View a freak accident, the sort of cosmic pileup of time and space that can never be avoided in a complicated world. But as the journalist Jessie Singer has argued, in much of American life, many “accidents” are far from accidental – they are instead the inevitable result of political and economic choices that society has made, and they might have been prevented had we made other , safer choices.

States and cities will soon be showered with $ 1.2 trillion in infrastructure funding that Congress allocated last year. Some traffic safety advocates told me they see this money as a huge opportunity to save our roads – but to make the best use of that money, they said, we have to be willing to think about road safety in a transformative way.

No one knows if Andre would have lived if Caltrans, the California state traffic agency that manages El Camino Real, had built this crossing with the safety of bikers and pedestrians in mind. Mathew Roe, a transportation planner at the National Association of City Transportation Officials, suggested several simple safety features that might have helped, among them protected bike lanes, which offer a physical barrier between cars and bicycles; raised areas at corners behind which bikes could safely queue while waiting for the light to change; a “setback” that forces cars to wait farther back from the intersection, improving their ability to see pedestrians and bikers, and separate signals for bikes and cars, to help each kind of vehicle stay out of the other’s way. Even a “No Turn on Red” sign might have changed Andre’s fate.

The United States is in the midst of a traffic fatality crisis. Nearly 39,000 people died in motor vehicle crashes on American roadways in 2020, the most since 2007. American roads have grown especially dangerous to “nonoccupants” of vehicles – that is, bicyclists and pedestrians. In 2011, 16 percent of traffic deaths were from nonoccupants; in 2020 it was 20 percent. The trends are a major reversal – from the 1970s until the late 2000s, deaths on American roadways of bicyclists, pedestrians and people in cars had steadily declined. There are a number of potential reasons for rising deaths – among them that many more of our cars are big and deadly SUVs, that states keep raising speed limits, that ride-sharing vehicles have made our roads more chaotic, and that people drove much more recklessly during the pandemic. But while many cities, states and the federal government have unveiled plans to mitigate the horror, progress has been elusive.

The intersection of El Camino and Grant Road illustrates a major part of the problem. A big reason our roads are unsafe is because they were designed that way – because, as the advocacy group Smart Growth America puts it, policymakers at nearly every level of government continue to prioritize the speedy movement of vehicles over the safety of everyone else on our streets. And even when the dangers of our bad roads become glaring, officials have limited options for fixing them.

Our roads are deadly because officials will still call the inevitable consequences of this ill-design a tragedy rather than a choice.

The only way for America to reverse its traffic death spiral is to make a radically different choice. Traffic fatalities have been falling steadily in most of the United States’ peer nations, many of which have adopted stricter rules regarding speed limits, seatbelts, drunken driving, helmets and vehicle safety standards. Many of our peers have also pulled back from car-focused road design. Now we have a chance to replicate their success.

How? We have to make cars smaller, because SUVs are significantly more deadly to pedestrians than sedans. We have to slow them down, because speed kills. And we have to be willing to slightly inconvenience drivers to improve the roads for everyone else.

In practice this will include installing a variety of road-safety features and instituting new rules. We could roll out protected bike lanes just about everywhere; we could alter our busiest intersections so that bicycles and pedestrians are given marked, safe places to wait and specialized signaling to let them know when to go; we have to sometimes make cars and trucks wait longer at a signal so other people can safely use the road.

But we need to do more than just install a bunch of new bike lanes – we need to make installing bike lanes and other safety measures for pedestrians and bicyclists a routine part of designing our streets.

“It’s about retraining our brains,” Zabe Bent, a traffic planning expert at the National Association of City Transportation Officials, told me. In much of the United States today, the safety and convenience of drivers are seen as the natural state of things, while installing safety measures for bicycles and pedestrians requires special approval. Among the most macabre policies: In the federal government’s traffic safety bible, the MUTCD, one way for a locality to justify installing a traffic signal at a crosswalk is if a certain number of people have been injured there.

Bent’s group advocates altering such default standards to favor modes of travel other than cars. She pointed to an ordinance passed in Cambridge, Mass., In 2019 that requires the installation of safe bike paths on any road that the city is repairing. In other words, bike safety is required by design – and city officials must request permission to avoid installing a bike lane. “They flipped it,” Bent said. “You have to demonstrate why you can not build a protected bike lane,” instead of begging that the city do so.

Are American policymakers courageous enough to advocate for bike and pedestrian safety if it means inconveniencing cars? I can not say I’m sanguine. Drivers are a phenomenally powerful political force – see how even Democratic politicians like Gov. Gavin Newsom of California and President Biden have recently tossed aside their environmental goals in order to alleviate gas prices.

But it’s worth remembering that protecting pedestrians and bicycles on our roads is not just good for walkers and bikers. It’s also good for drivers – both because most drivers are also sometimes pedestrians, and because turning some car commuters into bike commuters clears up traffic for cars. Then there’s the civilizational imperative. While it’s very nice that cars are transitioning from gas to electricity, switching the fuel source of our automobiles is unlikely to be enough to meet our goals for emissions reductions to combat climate change. Combating climate change also requires American to drive less and walk and bike a lot more than we do now.

At the moment, compared to many parts of Europe, walking and riding a bike in America is a terrifically dangerous proposition. But these dismal stats can be reversed. Even Amsterdam was not always Amsterdam: Until the 1970s, the Dutch bike haven was as car-dependent as many other places in the world – and it was only after a fierce activist campaign triggered by hundreds of traffic deaths that Amsterdam decided to adopt bicycle safety as a central part of its urban plan.

American states and cities now have an opportunity to do the same. But they must act fast, and they must act decisively. This is no time for half-decade-long action plans.

A week after Andre Retana’s death, his parents called in to a Mountain View community meeting with a plea for city officials to rethink road safety.

“He should still be here with us,” Andre’s father told officials. “We want something done quicker than 2030.”

Farhad wants to chat with readers on the phone. If you’re interested in talking to a New York Times columnist about anything that’s on your mind, please fill out this form. Farhad will select a few readers to call.