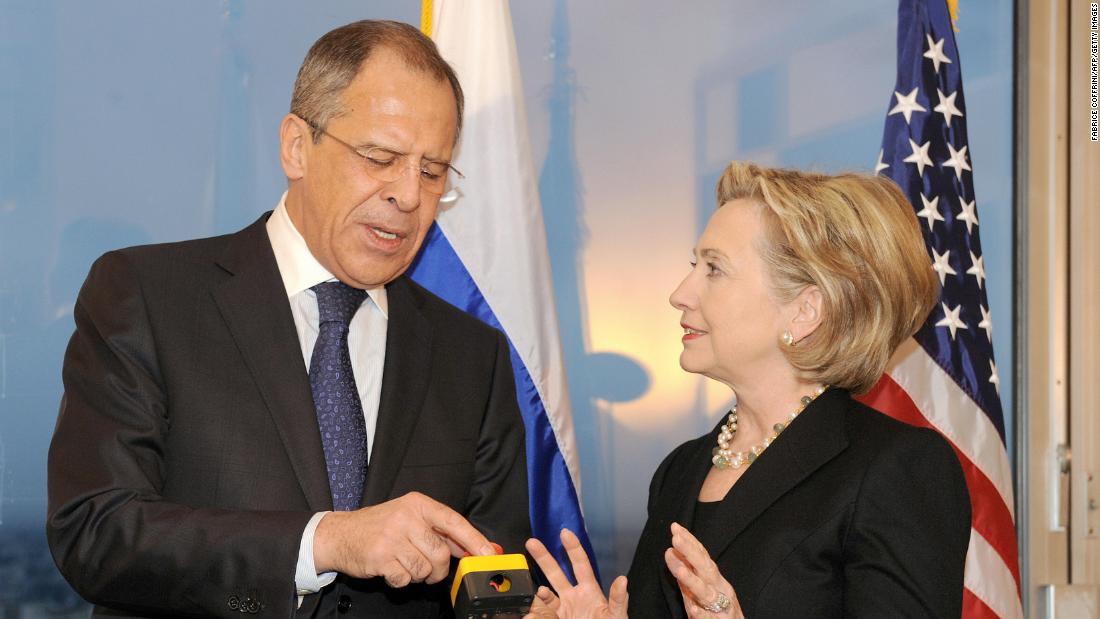 “Remember the red button?” a friend texted when the first Russian bombs fell on Kyiv. In the region that has been colonized and tormented by Russia for centuries, everyone remembers the red “reset” button: the gift of an illusory fresh start that Hillary Clinton presented to Russian Foreign Minister Sergey Lavrov during their meeting in Geneva 2009.

By then, the invasion of Georgia’s capital Tbilisi had been averted, but with 20% of its territory occupied by Russia, the country’s sovereignty was dangerously crippled. The Georgian government, America’s closest non-NATO ally in the region, was warning about a new, hybrid war. But after all the trauma of Bush’s foreign adventures, the United States was eager to move on.

As Clinton presented Lavrov with a red button, global headlines focused on the amusing fact that Americans had managed to misspell “reset” in Russian and that it made Lavrov laugh. But the region gasped for air: everyone who has experienced Russian oppression knew that what really pleased Lavrov was that Moscow got away with murder.

Over the next 14 years, it would happen again and again. Many of us, including me, did not think Putin would launch an invasion of this scale against Ukraine. Millions of us – Ukrainians, Moldovans, Georgians, Syrians, Armenians and Azeris – have all participated in dress rehearsals for the horror show that the Kremlin has now unleashed. And we know that it did not have to come to this.

The playbook Putin has been using to rebuild his empire was always rudimentary. The supposed antagonists were always an oppressed population and a “fascist” government backed by the United States.

But with each rehearsal Putin tweaked the play. In Georgia in 2008, Putin’s soldiers had dirty boots and rusty tanks, but he first tested his now infamous cyber attacks. He got away with it.

By the time Russian troops arrived in Crimea six years later, they had shiny new boots and new uniforms modeled on US special forces. And Putin, fresh after his Olympics triumph in Sochi, was more confident than ever. He lied at a scale we had never seen before, telling the world that Russian soldiers were not Russian soldiers, and then he annexed Crimea. He got away with it.
Then came Donbas and Syria, interference in the US elections, the Salisbury killings and the Navalny poisoning. And each time he got away with murder, we met a new Putin – more brutal at home and more audacious abroad.

The United States and Europe spent millions countering Russian disinformation. But debunking his propaganda was not enough to counter the narratives Putin had pushed using powerful, multi-million dollar media networks that he kept building, at home and abroad.

This network, which included big names like RT and Sputnik, but also hundreds of small websites and social media channels, tapped masterfully into existing fears and legitimate grievances of each audience they addressed.

America’s 2003 invasion of Iraq and the disaster that followed was a gift Putin used to turn any debate into another round of exhausting whataboutery, which in turn made Putin a hero for the European far-left.

He turned LGBTQ + rights into a frontline of his domestic attack on the West, telling traditional Russians and their neighbors that their families and their values ​​were under threat. It worked. “I am fighting because I do not want to be forced to marry a man,” a pro-Russian fighter in Ukraine told me in 2014.
Eventually this family values ​​narrative caught up in the West, turning Putin into an unexpected hero for the far right. Authoritarian populists all around the world were suddenly reaching out for help: Kremlin-funded Sputnik was training state media workers from Georgia to the Philippines and India and by 2020, Brazilian president Bolsonaro was repeating a myth about a supposed Western plot to legalize paedophilia that I first heard on the Russian state TV back in 2012.

But what made Putin truly powerful was not the narratives he molded or territories that he grabbed. It was the complacent, stubborn refusal of the collective West to accept that he was at war with them.

For years, Western media portrayed Ukraine as a country “at war with itself.” But it never was. It was bewildering to me that after all these years, even before this latest, and possibly fatal for him, invasion, the debate in the West focused on rights and wrongs of the NATO enlargement and not the fact that a sovereign country has the right to choose its own path.

“What will it take for them to wake up?” one Ukrainian soldier asked me, when I interviewed him as a journalist about Georgia’s and Ukraine’s shared ordeal in 2015. Now we know the answer, but back then, as we sat in a cold, wet trench on the frontline of Ukraine’s war we could not find it.

The soldier, Dima, was like every Ukrainian you now see on your screen: stoic, determined, calm. He was 23, a software engineer from Kyiv who had only recently decided to leave his job and join the fight. His girlfriend was furious with him, he told me, but fighting was not optional.

They do now. The whole world is suddenly high on moral clarity. For everyone who has lived on the frontlines of Putin’s hatred for liberal democracy, this show of Western unity and the resurgence of liberal values ​​comes as an incredible relief. But it will not last unless we also accept that it already comes too late for far too many.

It is too late for Georgians who never stopped losing lives and land, for countless residents of Aleppo who died in the Russian bombardment, for 298 men, women and children who fell from the sky when a civilian Boeing MH17 was shot down by a Russian BUK missile in 2015, for thousands who died in the Donbas in the last 8 years and for countless others who are yet to die in Ukraine.

It is too late for Dima, who was killed in eastern Ukraine in fighting a year after we spoke and long before Europeans finally recognized that it was them he was fighting for.

His question why it took the West so long to wake up is still being asked by millions of people who live on frontlines of Putin’s hatred for liberal democracy all around the world. It is the question that should inform whatever the West does with the new world order that will hatch out of Putin’s invasion of Ukraine.