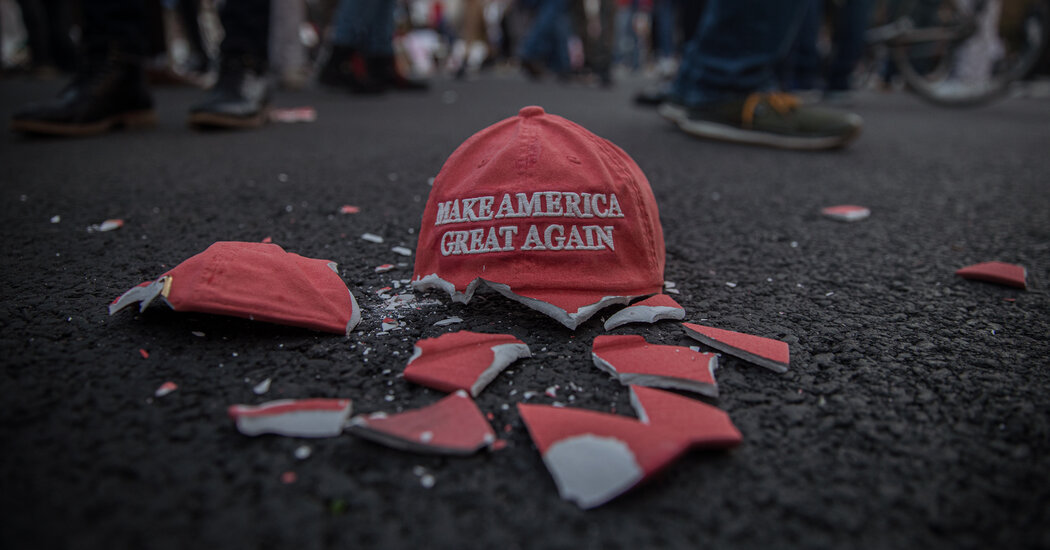 None of that mattered.

“Anti-establishment conservatives found him refreshing,” Continetti adds. “Not one iota of Trump was politically correct. He played by no rules of civility. He genuflected to no one. He despised the media with the same intensity as the conservative grass roots. ”

Millions of voters may have found Trump “refreshing,” but there continue to be dissenters on the right who see the consequences as disastrous.

David French, a senior editor at The Dispatch, warned in an interview with Sean Illing of Vox:

Here’s what’s the terrifying thing on the right that can be a career- and reputation-ending allegation: “You’re weak. You’re a coward. ” So the transformation, this flipping upside down of morality, turning bullying into strength, turning restraint into vice, all of that, what has then happened is it enables the Trumpists and the Trumpist world. They’re wielding this sword that is very sharp culturally in red spaces, this accusation of weakness and cowardice, as a weapon to keep people in line, because they’ve defined support for this movement as evidence of your strength.

Yuval Levin, a senior fellow at the American Enterprise Institute (and a contributing Opinion writer for The Times), described a transformation on the right that began before Trump but has accelerated under his direction. Speaking at a March 2021 Harvard Kennedy School forum, Levin said: “I think conservatives are naturally defenders of a society’s institutions – not blindly, they’re also reformers – but they believe in the purposes of those institutions.”

The Republican Party, he continued,

In the fall of 2016, with Trump as the Republican presidential nominee, Levin wrote in Politico magazine:

This election cycle has revealed serious fault lines and weaknesses on the right, and the Republican Party will be working to make sense of it all for years. But for conservatives – I mean those who champion some version of the difficult balance of traditionalism in the moral arena, market mechanisms for addressing our economic challenges, and American strength in a dangerous world – all bound by a limited-government constitutionalism – this sorry year lessons have one overarching implication: We can no longer treat the GOP simply as our own.

Levin faults the conservative movement for clinging to “an agenda almost frozen in amber, locking in place a 1980s-style policy program even as the nation changed around us.”

“Trump blew it all up,” Levin wrote. “It’s not that he had a rival policy prescription; his campaign largely amounts to a frantic venting of frustrations punctuated by demagogic chest-thumping. But his approach clearly appealed to a significant portion of Republican voters. ”

In fact, Trump did have one crystal-clear policy objective: to drastically reduce immigration, legal and illegal. The Washington Post editorial board wrote in September 2020:

Without the assent of Congress, President Trump has remade almost every major facet of America’s immigration system over the past three-plus years, slashing levels of legal and illegal arrivals; refugees and asylum seekers; Muslim and Christian migrants. He has sought to strip citizenship from naturalized Americans and subject “dreamers” raised in this country to deportation. He tried to deter illegal border crossings by sundering families, thereby traumatizing migrant teens, tweens and toddlers.

While many on the left deeply opposed these policies, Trump’s base was overwhelmingly behind him. As The Post pointed out:

Mr. Trump has largely succeeded in delivering on the anti-immigration message that drove his 2016 victory and continues to animate much of his base. Only a small fraction of his border wall has been built, and Mexico has paid for none of it, but the thrust of his nativist vision has taken root in hundreds of rule changes and policy shifts that have slammed shut America’s doors.

Every so often the right has embraced a demagogic leader who pulls it toward the political fringe. From Tom Watson to Henry Ford, Father Coughlin to Charles Lindbergh, Joseph McCarthy to George Wallace, Ross Perot to Pat Buchanan, Ron Paul to Donald Trump, these tribunes of discontent have succumbed to conspiracy theories, racism and anti-Semitism. They have flirted with violence. They have played footsie with autocracy.

One aspect of the rise of Trump that has not received adequate attention is the substantial intellectual infrastructure that has buoyed the Trumpist right, its willingness to rupture moral codes and to discard traditional norms – an infrastructure that includes the Claremont Institute, Hillsdale College, First Things magazine and the American Mind website.

Take the analysis of John Marini, a senior fellow at the Claremont Institute, in his 2016 essay “Donald Trump and the American Crisis”:

Social institutions dependent upon the old morality have become intellectually indefensible. In terms of contemporary social and political thought, it is the good understood as the old that is no longer defensible, and its political defense has therefore become untenable. This alone makes the defense of reasonable conservatism – and constitutionalism itself – something akin to the defense of a dream that masquerades itself as reality in the minds of its votaries.

Or take the view of Sohrab Ahmari, a columnist for First Things, that courtesy and common decency serve to protect a dysfunctional established order:

Progressives understand that culture war means discrediting their opponents and weakening or destroying their institutions. Conservatives should approach the culture war with a similar realism. Civility and decency are secondary values. They regulate compliance with an established order and orthodoxy.

In other words, Ahmari writes, “To recognize that enmity is real is its own kind of moral duty.”

Or take the view of Glenn Ellmers, a visiting research scholar at Hillsdale College, in his 2021 essay “‘Conservatism’ Is No Longer Enough”:

Our norms are now hopelessly corrupt and need to be destroyed. It has been like this for a while – and the MAGA voters knew it, while most of the policy wonks and magazine scribblers did not still and still do not. In almost every case, the political practices, institutions, and even rhetorical governing the United States have become hostile to both liberty and virtue.

I asked a number of center-right conservative thinkers the following questions: To what degree was the Trump takeover of the Republican Party a legitimate democratic insurgency by a white working / middle-class electorate that had been providing crucial margins of victory to the Republican Party , but whose opposition to liberal immigration and trade policies (and whose support for universal benefit programs like Social Security and Medicare) had been rejected by the Republican establishment? And will the tension between an increasingly “woke” corporate America and a Republican Party taking “anti-woke” stands become a significant conflict?