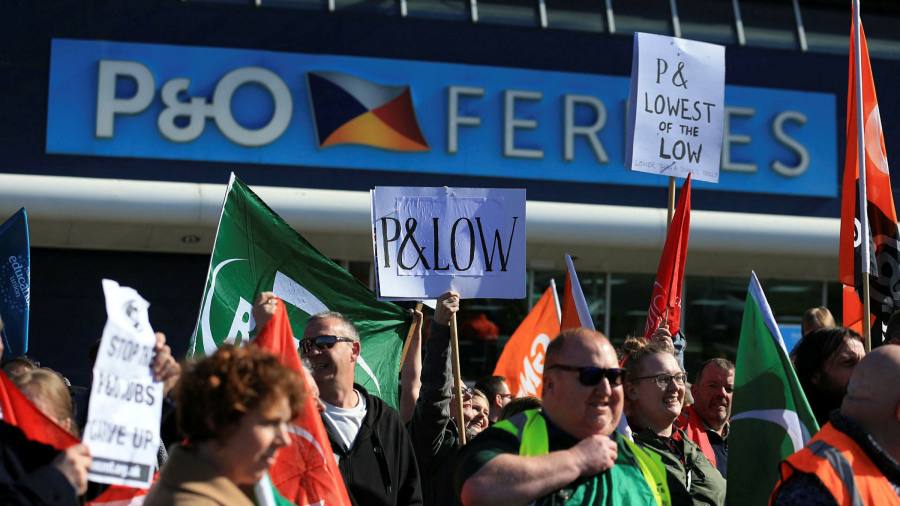 The recent sacking of 800 workers not only trashed the reputation of P&O Ferries. It also shone an unflattering spotlight on British labor law. The UK has long favored light-touch employment regulation, believing it boosts job creation. That is no justification for loopholes, feeble penalties and weak enforcement.

Legal gaps are easy enough to close. Transport secretary Grant Shapps set out plans on Wednesday to force companies operating from British ports to pay the UK minimum wage, which rises to £ 9.50 for adults next month. That is 84 per cent more than the minimum hourly rate P&O planned to pay, though it will still save by only paying crew for the actual time they work.

P&O last week made the horrendous admission that it consciously broke the law when it chose not to consult unions. Instead, it offered seafarers £ 36.5mn in compensation in an attempt to buy itself out of its bonds. Such cynical calculations are an affront to the rule of law. Penalties for breaking laws should cost companies more than complying with them.

That description does not apply to modestly higher fines for employers who fail to consult when dismissing workers and taking them on again on worse terms. Such practices are lawful if they are a reasonable response to financial distress. They remain controversial – as Centrica and British Airways discovered. A High Court injunction against Tesco last month in a fire-and-rehire case was highly unusual.

The UK does little to support minimum wage legislation. Financial sanctions are low, particularly if a company is pursued by an individual rather than the state. There has been little progress in stamping out underpayment of the kind found in Leicester’s clothing factories as outlined in a 2020 investigation commissioned by Boohoo.

The UK has a high minimum wage by international standards. Politicians are no longer publicly pushing a post-Brexit “Singapore-on-Thames” model involving the dilution of workers’ rights. But laws are only as good as their enforcement. Failures not only harm workers. They put good employers at risk of being undercut by bad ones.

City Bulletin is a daily City of London briefing delivered directly to your inbox as the market opens. Click here to receive it five days a week