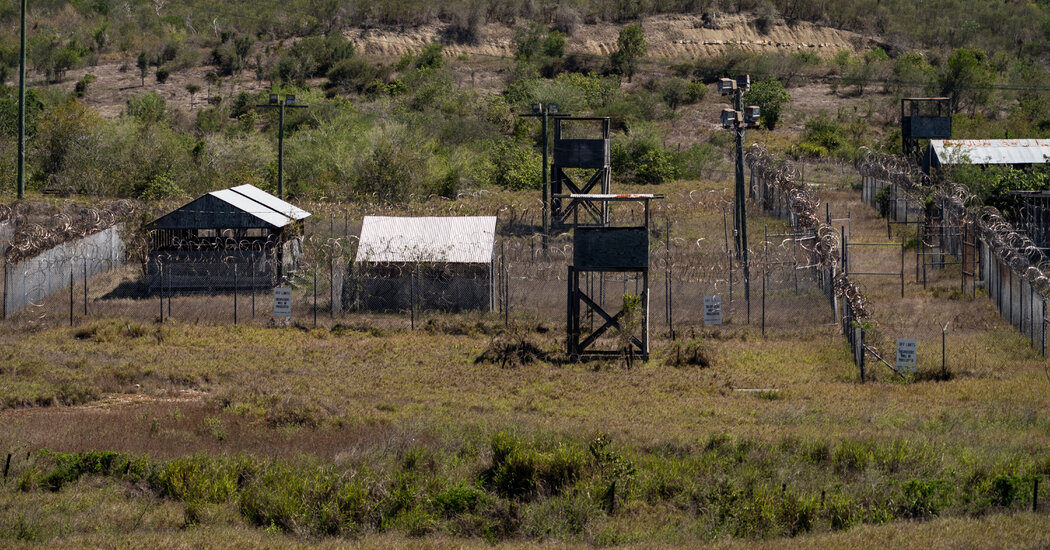 WASHINGTON – The case of a mentally ill detainee at Guantánamo Bay, Mohammed al-Qahtani, has long confounded the United States government. Suspected of being Al Qaeda’s intended 20th hijacker in the Sept. 11, 2001, attacks, he was tortured by military interrogators early in his detention at the American naval base in Cuba.

A senior Pentagon official later determined that, because of how Mr. Qahtani was initially treated, he could not be prosecuted. Security officials also considered him too dangerous to release, so he has remained detained for two decades.

On Friday, the Pentagon said that a parole-like board had recommended repatriating Mr. Qahtani to Saudi Arabia to a custodial rehabilitation and mental health care program for extremists. The Biden administration is expected to send him there as early as March.

The move followed a report last spring by a Navy doctor who concluded that Mr. Qahtani, who is in his 40s, should be transferred because he could not receive the medical treatment he needed at Guantánamo and was too impaired to pose a future threat – especially if he was sent to inpatient mental care, according to people briefed on that report .

In June, the Periodic Review Board, a six-agency panel that reviews the cases of uncharged Guantánamo prisoners, unanimously adopted that recommendation, according to officials. But the Biden administration, apparently while negotiating a security agreement with Saudi Arabia for Mr. Qahtani’s repatriation, held off on making the decision public until Friday.

“The board recognizes the detainee presents some level of threat in light of his past activities and associations,” the panel said, explaining why it believed that threat could be “adequately mitigated,” making his continued indefinite detention unnecessary.

Among them, it cited Mr. Qahtani’s “significantly compromised mental health condition.” It also cited his “available family support” and Saudi Arabia’s ability to provide “comprehensive mental health care,” as well as its ability to monitor him and restrict his travel if he completes treatment.

Ramzi Kassem, a lawyer for Mr. Qahtani and a law professor at the City University of New York, called the decision to recommend his client’s transfer “long overdue.” He cited his client’s serious mental illness, including repeated recent suicide attempts.

“Despite the severity of his illness, Mohammed does not pose a risk to anyone but himself.” Kassem said. “He needs psychiatric treatment in Saudi Arabia, not continued incarceration in Cuba.”

Mr. Qahtani is one of 39 detainees left at the wartime prison, and is one of 19 who have been recommended for transfer subject to security arrangements. By law, Defense Secretary Lloyd J. Austin III must tell Congress 30 days before any such transfer that he is satisfied with the agreement.

But most of those 19 detainees cannot be sent home because they come from unstable countries like Yemen and Somalia, which by law cannot receive Guantánamo detainees. So the Biden administration must find other countries willing to take them. Because Mr. Qahtani can be repatriated, he could be the first to leave.

Mr. Qahtani’s notoriety is linked to his attempt to enter the United States on Aug. 4, 2001, when an immigration inspector at the Orlando airport turned him away. The authorities later discovered that Mohamed Atta – a ringleader of the attack carried out by 19 hijackers that killed nearly 3,000 people the next month – had come to meet him there.

The circumstances led the authorities to believe that Al Qaeda had sent Mr. Qahtani to serve as a member of the team that hijacked United Airlines Flight 93. Passengers on the flight fought back and caused the plane to crash into a Pennsylvania field rather than its likely intended target, the US Capitol.

(Mr. Qahtani has never been tried or convicted of being part of that conspiracy. Even if he had been, it is not clear whether Mr. Qahtani, who sustained a traumatic brain injury as a youth and was diagnosed with schizophrenia before he tried to enter the United States, had any specific knowledge of what the government suspects Mr. Atta was planning for him.)

By the time the United States invaded Afghanistan in response to the Sept. 11 attacks, Mr. Qahtani had drifted into jihadi circles and was captured along the Pakistani frontier in December 2001 with a group of foreign fighters. He and those believed to be bodyguards to Osama bin Laden were sent to Guantánamo in early 2002.

Later that year, the US military recognized that he might be no ordinary detainee. With authorization from Defense Secretary Donald H. Rumsfeld, he was forced to undergo two months of continuous, brutal interrogation by the US military inside a wooden hut at Camp X-Ray in late 2002 and early 2003.

Hour-by-hour logs leaked to Time magazine showed military interrogators placed Mr. Qahtani in solitary confinement, stripped him naked, forcibly shaved him, and subjected him to prolonged sleep deprivation, dehydration, exposure to cold, and various psychological and sexual humiliations like making him bark like a dog, dance with a man and wear women’s underwear on his head. They extracted a confession, which he later recanted.

Mr. Qahtani’s treatment was so degrading and abusive that the Bush administration’s official overseeing military commissions, Susan J. Crawford, concluded in 2008 that he could not be prosecuted. Because “we tortured” him, she told The Washington Post that year, she refused to authorize his capital prosecution with Khalid Shaikh Mohammed, the self-described mastermind of the attacks, and four other detainees accused of aiding them.

Mr. Mohammed and the four other men – whose case at the military commissions system has been in pretrial hearings for nearly a decade – were also tortured in American custody. But that occurred in the overseas prisons of the CIA, with graphic descriptions emerging years after Ms. Crawford’s decision about Mr. Qahtani. Their torture by the CIA has been a major issue in that case.

As early as 2009, then Vice President-elect Joseph R. Biden Jr. recognized the conundrum surrounding Mr. Qahtani. “We’re inheriting a very difficult situation,” he said days before assuming office. “Not all of it is clear cut.”

As vice president, former administration officials recall, Mr. Biden was dedicated to President Barack Obama’s commitment to ending detention operations at Guantánamo, including personally asking foreign leaders to help resettle detainees who could not go home. While Congress enacted a law that thwarted Mr. Obama’s plan to close the prison by transferring some detainees to a different facility in the United States, the administration still managed to greatly winnow down the number of prisoners there.

The only detainee to leave the prison under President Donald J. Trump was also transferred to detention in Saudi Arabia. A year into Mr. Biden’s presidency, his administration has transferred just one more out. Mr. Biden has described closing the facility as a policy goal, but he has not pushed Congress to rescind the law that prevents bringing any detainees to high-security prisons on domestic soil or appointed a special envoy to negotiate transfer deals, as the Obama administration had.

Mr. Qahtani’s approval for repatriation follows litigation by his defense lawyers, Mr. Kassem and Shayana Kadidal of the Center for Constitutional Rights. They have argued that he deserves to be released to Saudi Arabia on medical grounds under both the Geneva Conventions and a US Army regulation.

His lawyers enlisted a psychiatrist who treats US military veterans for post-traumatic stress, Emily Keram, to evaluate Mr. Qahtani over the years, starting in 2015. Dr. Keram also scrutinized his records from Saudi Arabia showing that he had undergone an acute psychotic break there attributed to schizophrenia long before he arrived at Guantánamo.

The torture only made him sicker, the psychiatrist wrote in a series of reports to the court, and Mr. Qahtani distrusts American military health providers, most likely because military medics were used at his interrogations. He has refused psychotropic medication and in recent years repeatedly tried to kill himself, including by hanging, cutting and swallowing broken glass, court documents show.

In 2020, based on Dr. Keram’s work, a federal judge ordered an independent examination by a three-doctor panel, two of them foreigners. The Trump Justice Department opposed that order, which would have been the first foreign medical intervention at the wartime prison.

Instead, Congress created a position of a Navy doctor who would be assigned to the base but who would work independently. Mr. Qahtani’s lawyers agreed to put off resolving the court case while that official scrutinized the military’s medical records and Dr. Keram’s findings. The government has a deadline on Monday to tell the court its position on the judge’s order requiring an independent examination.

In May, the Navy doctor, Corry J. Kucik, concurred with Dr. Keram’s findings, according to people familiar with a seven-page report he prepared for the Periodic Review Board.

Dr. Kucik agreed that Mr. Qahtani was damaged by his childhood brain injury and the schizophrenia he developed as an adolescent, and that his abusive interrogation and subsequent continued confinement had only aggravated that.

Dr. Kucik, the people said, also agreed that Mr. Qahtani could not be adequately treated at Guantánamo, and that he was extremely unlikely to pose any threat if sent to a Saudi mental hospital near his family where his mental health could be more effectively addressed.