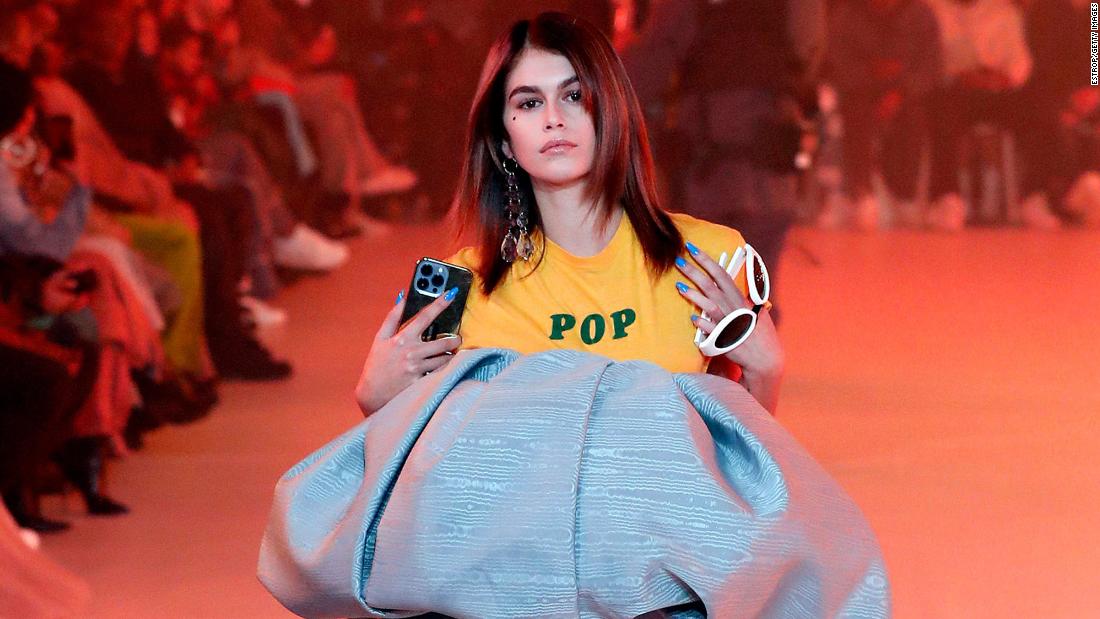 But it was another high-profile model moment that stole the limelight: mother-and-daughter duo Cindy Crawford and Kaia Gerber making a rare appearance on the same catwalk.

Wearing a set of dressier looks from Off-White’s latest collection – which was designed, in large part, by its late founder Virgil Abloh – the pair turned heads on Paris Fashion Week’s opening day.

Dubbed “Spaceship Earth,” the presentation saw models walking across a large white square at the Palais Brongniart, while a sizable prop chandelier anchored the room. The semi-monolithic household finery offered hints of “2001: A Space Odyssey.”

Yet the clothes were less conceptual and more grounded in the visual trademarks established by Abloh in the decade since founding his company. There were plenty of cutaway and layered tulle dresses and skirts à la Crawford’s, while spiky-eared hats and varsity jackets were accompanied by the designer’s signature motif: quotation-marked phrases. Jenner wore a sparkling noir mini printed with the words “Little Black Dress,” while two models stood on the runway with flags bearing the phrase “Question Everything.”

It has been reported that Off-White’s owners, LVMH and New Guards Group, are hoping to continue Abloh’s vision while building the brand into a multi-billion-dollar business. The late designer had a keen and curious aesthetic eye, but was just as engaged in popular culture, which helped to garner the label’s mass appeal through a constellation of famous friends and faces.

Whoever fills his creative shoes will need to continue striking this balance between zeitgeist-y clothes and zeitgeist-y people. With the likes of Rihanna, A $ AP Rocky, Pharrell Williams and Idris Elba in attendance Monday, the brand may already be on its way.