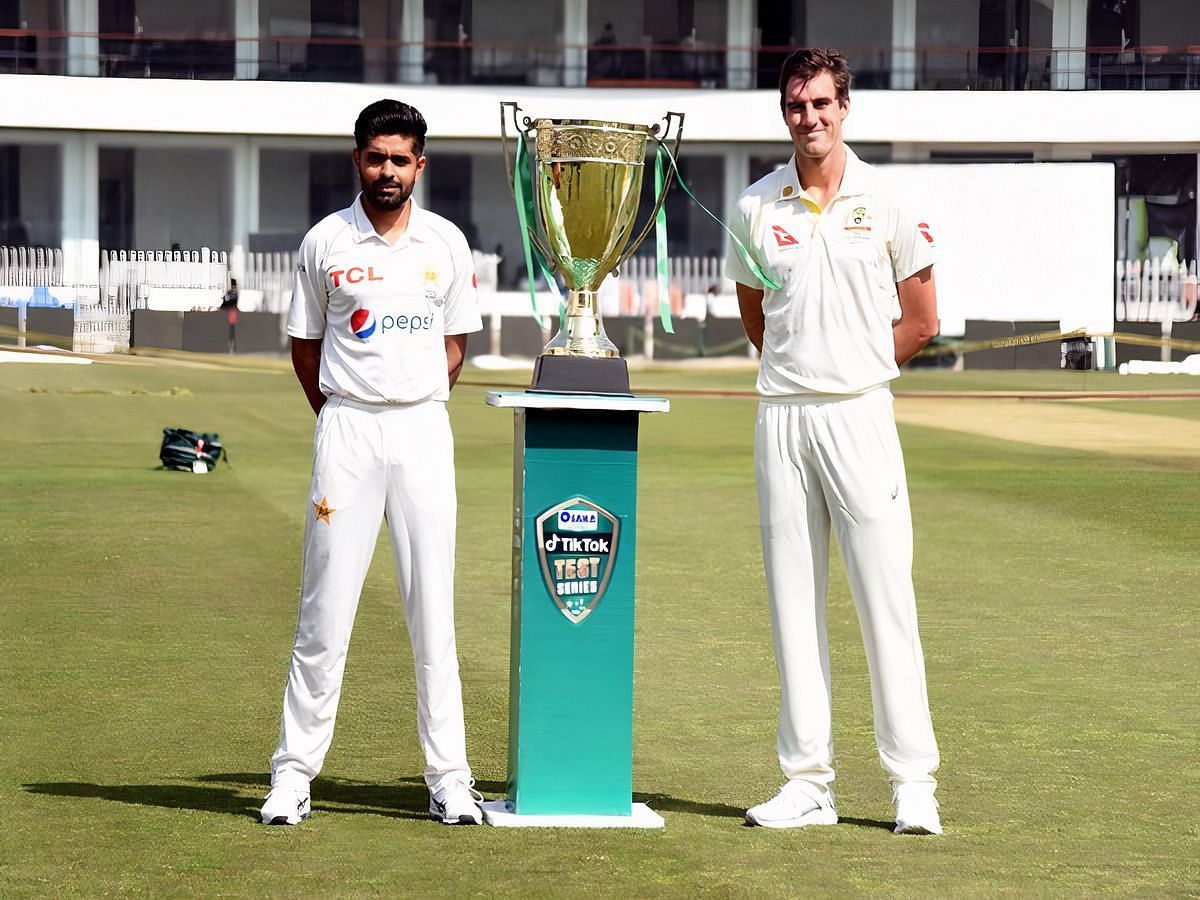 The Pakistan Cricket Board and Cricket Australia have collaborated to introduce the Benaud-Qadir trophy, which will be handed to the winner of the upcoming three-match Test series.

Richie Benaud and Abdul Qadir were instrumental cricketers for their respective countries across different generations.

Pakistan captain Babar Azam and Australia captain Pat Cummins were presented with the Benaud-Qadir trophy at the Pindi Cricket Stadium, Rawalpindi, the venue for the first Test. The trophy will be awarded to the winner at the PCB Headquarters in Lahore following the culmination of the series.

The decision was taken to commemorate Australia’s first visit to Pakistan in 24 years. The Benaud-Qadir trophy will continue to be a presence in all subsequent Test series between the two nations in the future.

Richie Benaud made the world take notice of the art of leg-spin in his playing days and continued to mesmerize the fans with his poignant commentary on the mic. The legendary player led the Australian team on their first tour of Pakistan in 1959, coming out winners by a 2-0 margin.

Abdul Qadir carved a niche for himself in an era dominated by fast bowlers. The wily leg-spinner had a particular knack for Australia, which is backed by his exemplary displays against them. He took 45 wickets in the 11 Tests he played against the Australians.

Claiming that there is no other way to mark the return of Australia to Pakistan, PCB Chief Executive Officer Faisal Hasnain said:

“There can be no better way to celebrate and mark the revival of Pakistan-Australia Test rivalry in Pakistan by launching the trophy in the names of two absolute legends and icons of this great game – Richie Benaud and Abdul Qadir. These two gentlemen remain a flavor of all eras and ages as their contributions towards cricket in general and wrist-spin bowling in particular are second to none. “

Adding that the introduction of the Benaud-Qadir Trophy strengthens PCB’s association with CA, Fasnain continued:

“The launch of the Benaud-Qadir Trophy will add further context and spice to Pakistan-Australia Test series, which historically have been well-contested and hard-fought. The launch of Benaud-Qadir Trophy is a joint initiative of the PCB and CA that clearly demonstrates the strong and cordial relationship between the two cricket boards. The PCB looks forward to working very closely with the CA in the years to come. “

The two nations have competed in 25 Test series so far, with Australia winning 13 and Pakistan coming out as the winners on seven occasions.

The upcoming series holds high regard in terms of history as well as the ongoing World Test Championship. Australia and Pakistan are touted to finish high in the standings and make their maiden appearance in the competition’s final.

Australian Test captain Pat Cummins will lead the team in his maiden overseas assignment. The skipper believes that winning the trophy would mark the perfect conclusion of the series for the visitors. He said:

“To be able to compete for the Benaud-Qadir Trophy for the first time is a huge honor. As current players, we really are standing on the shoulders of these greats of the past who helped to grow and popularize the game in years gone by , and if my team can collect that trophy at the end of this series then it really would be the perfect end to the Test part of this historic tour. ”

Pakistan Test captain Babar Azam stated that he felt honored to be presented with the opportunity to lead the team in the quest for the inaugural edition of the series. He said:

“I am honored that I will be leading the Pakistan team in the Benaud-Qadir Trophy, we will try and give performances that will be a tribute to these two legends who will always remain legends of the game.”

Australia and Pakistan will compete for the trophy across three Tests starting on March 4 in Rawalpindi. Karachi and Lahore will host the second and third Tests respectively.