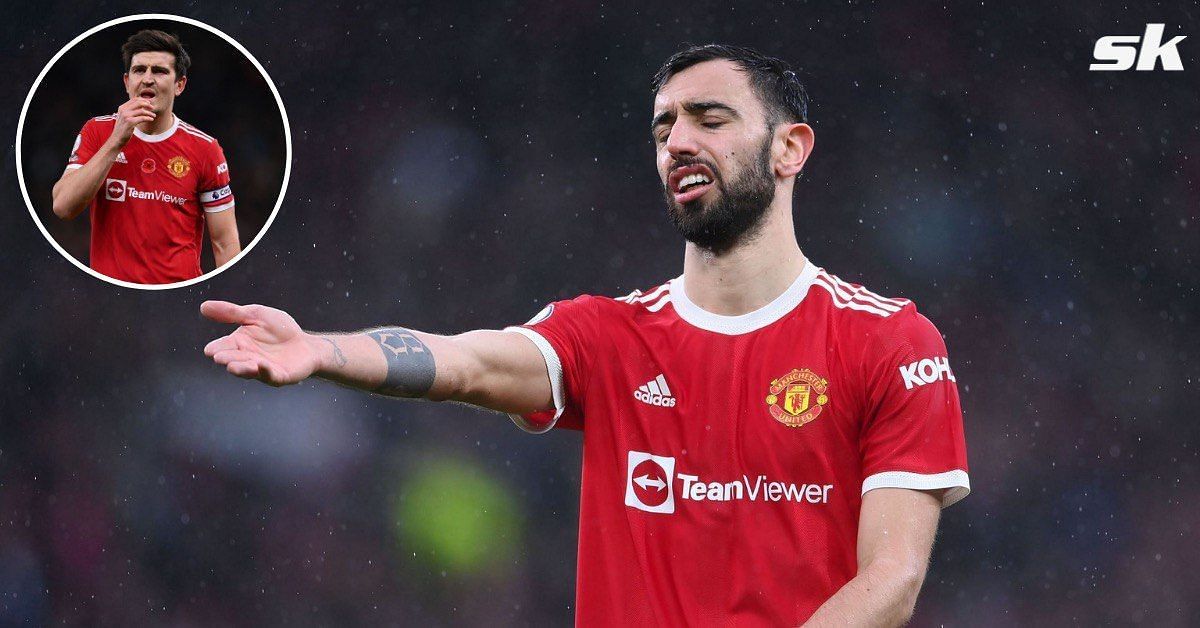 Manchester United midfielder Bruno Fernandes has insisted that no one at the club has any problems with Harry Maguire, with the Portuguese lashing out at people who make “stories.”

Fernandes recently posted a photo on social media that captured the attention of millions of people around the world. The post had a photo of Fernandes standing between Eric Bailly and Raphael Varane, with the caption:

“Feeling very safe between these two.”

As expected, many were quick to jump to conclusions after seeing the photo and thought that Fernandes preferred Bailly and Varane as his center-back pairing.

Bruno Fernandes responding to claims from some Man Utd fans he was taking a dig at Maguire when he posted the pic with Bailly and Varane.

You just have to love Bruno Fernandes. What a man!

Bruno Fernandes responding to claims from some Man Utd fans he was taking a dig at Maguire when he posted the pic with Bailly and Varane.You just have to love Bruno Fernandes. What a man! Https: //t.co/SXsE5Ycya5

While a section of fans are busy speculating, the Manchester United no.18 has come forward and cleared the air. He claimed that the photo did not have any intention of throwing shade at Harry Maguire, as everyone at the club is happy with him.

“Honestly, I think people question everything at this club. Every week we have a new story about something. I posted a photo on Instagram where I was with Rapha and Eric and I said, ‘I feel very secure in the middle with these two.’ ”Meaning, ‘security’ like if [someone] comes they are like my bodyguards. And people were complaining I was throwing something at Maguire. ”

“But Maguire was not the only defender who was not in the photo. [Victor] Lindelof was not in the photo, Phil Jones was not in the photo. People want to complain and want to make stories around us, but the most important [thing] is that we stick together and do our jobs on the pitch. Obviously, everyone is really happy with H because it’s really tough being in his place in the last period. Honestly, we all have bad games. ”

Both Fernandes and Maguire were on the scoresheet in Manchester United’s 4-2 win over Leeds United on Sunday. The win saw the Red Devils bolster their claim for a top-four finish in the Premier League.

Manchester United face their biggest test yet on Wednesday night

Having garnered some confidence with an important win over Leeds United, Manchester United are set to travel to Atletico Madrid on Wednesday night.

The first leg of their Champions League Round of 16 encounter is upon them, and the Red Devils have to be on their toes to win this.

David de Gea ahead of Man United vs. Atletico

David de Gea ahead of Man United vs. Atletico 👀 https://t.co/mrGag7U7Ry

Ralf Rangnick’s side have not been consistent this season, but fortunately for them, they are finally starting to find their feet. If they can keep their shape at the back, press aggressively, and feed Cristiano Ronaldo in the final third, they could bag an important first-leg win.