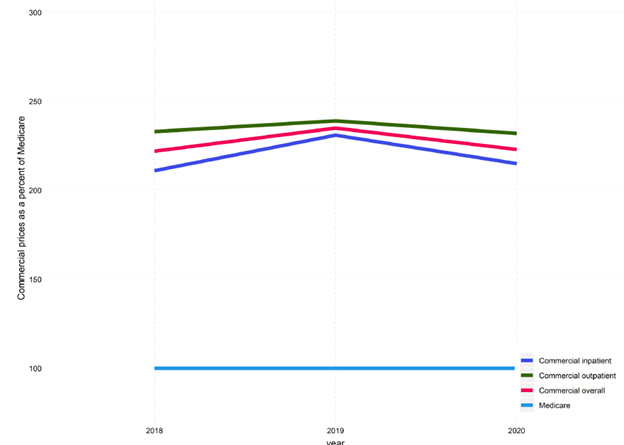 Recently the CBO published a report comparing the rates public and private insurers pay to hospitals for inpatient services, for services at hospital outpatient departments (HOPD), and at ambulatory surgical centers (ASC). A recent RAND report aims to do a similar exercise but contributes to the literature by using updated data from more states, allowing for comparisons between HOPD and ASC. These data come from health insurance claims data form three sources:

Note that the sample of self-insured employers and health plans is a convenience, not a representative sample. Also, the all-payer database disproportionately covers States in the Northeast and Northwest. Despite the fact that the sample is not full representative, a key benefit is that the data contained allowed amounts (ie, amounts actually paid including patient out-of-pocket cost), not hospital charges.

Relative prices have the advantage of looking at the actual price ratio including Medicare adjustments for case mix, wages, inflation, and medical education; standardized prices allow for comparison of non-Medicare payers to a single nationalized Medicare rate (without adjustments).

Hospital data was also linked to AHRQ’s Compendium of US Health Systems.

In 2020, when comparing hospital services for commercial vs. Medicare, the average overall relative price was:

Prices for outpatient surgery were higher for commercial compared to Medicare patients but the ratio is much smaller in magnitude than inpatient services.