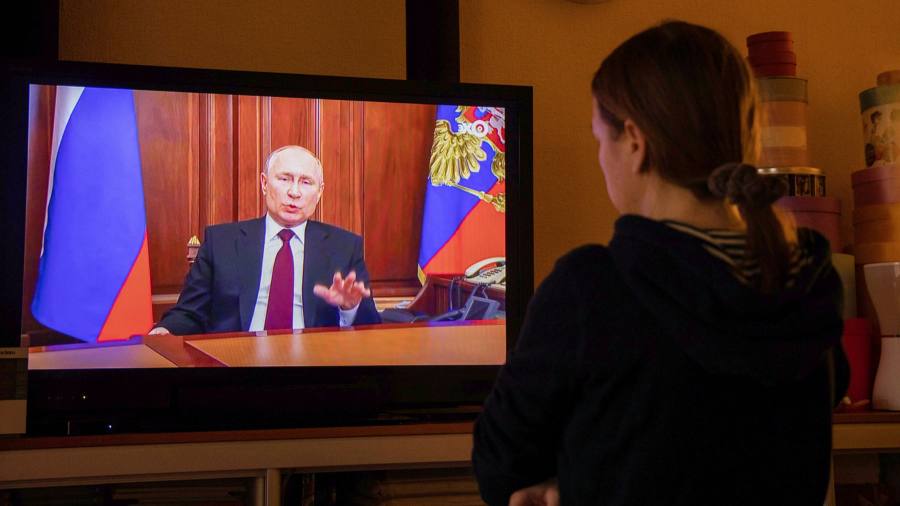 President Vladimir Putin made extensive reference to tsarist Russian, Soviet and postcommunist history on Monday in a speech that sought to justify the Kremlin’s second territorial dismemberment of Ukraine since 2014. The speech was notable for its distortions of that history and for a number of glaring omissions of the facts surrounding the emergence of Ukrainian national consciousness and independence.

Putin kicked things off by asserting that “since time immemorial, the people living in the southwest of what has historically been Russian land have called themselves Russians and Orthodox Christians”. His purpose was to deny the very notion of a Ukrainian nationhood separate from that of Russia.

Yet the ancestors of modern Ukrainians were known by various names up to the 1917 Bolshevik Revolution. The tsarist empire labeled them “Little Russians”, but those in the Austro-Hungarian empire – now an area of ​​western Ukraine, where many were and remain Catholics – were called Ruthenians. In the 19th century, with the rise under tsarism of patriotic intellectuals and writers such as Taras Shevchenko, the national poet, the idea of ​​a modern Ukrainian identity began to spread.

Putin glossed over the fact that the tsarist government perceived an acute threat from the growth of Ukrainian national consciousness. In its Ems Decree of 1876, it banned the publication and import of all Ukrainian-language publications. Yet the late tsarist empire’s insistence that all east Slavs were essentially Russians was a point of view more or less indistinguishable from Putin’s.

The Russian president asserted that “modern Ukraine was entirely created by Russia or, to be more precise, by Bolshevik, communist Russia”. This statement ignored the fact that the overthrow of tsarism in 1917 generated a wave of Ukrainian political activism that resulted in the creation of the Central Rada, a provisional governing body. The Central Rada proclaimed the independence of Ukraine in January 1918 – a landmark event unmentioned by Putin.

Amid the turbulence of the 1917-21 Russian civil war, Ukraine was unable to put its statehood on a firm footing and was overrun at different times by German, Polish, Russian and Ukrainian forces until the Bolsheviks took control. In 1922, Soviet Ukraine became one of the four founding republics of the Soviet Union.

Putin blamed Vladimir Lenin for employing “a slogan about the right of nations to self-determination, up to secession” in the process that led to the adoption of the 1924 Soviet constitution. “Lenin’s principles of state development were not just a mistake, they were worse than a mistake,” Putin said, because they laid the groundwork for Ukraine’s declaration of independence in 1991 as the Soviet Union broke up.

Yet Soviet Communist party leaders in the 1920s were in no doubt at all that Ukrainians were a nation distinct from Russians. Indeed, they adopted a policy of “Ukrainisation”, under which the state supported Ukrainian education, culture and language and promoted Ukrainians to high administrative posts. One aim was to make communist Ukraine attractive in the eye of Ukrainian minorities in Poland and other newly independent states in eastern Europe.

The most horrific event of 20th-century Ukraine’s history also received no attention from Putin. This was the Holodomor, or deliberately induced famine, that ravaged Ukraine and caused several million deaths as a result of Joseph Stalin’s forced collectivization of agriculture in the early 1930s.

If, as Putin suggests, modern Ukrainians are unworthy of a state of their own, one may ask why more than 90 per cent of them voted for independence in a referendum of December 1991. Every province of Ukraine backed independence, including Crimea, which Putin annexed in 2014. Despite having an ethnic Russian majority population, Crimea voted in 1991 by 54 per cent in favor of Ukrainian independence.

Similarly, Putin’s argument that postcommunist Ukraine became infested with “extreme nationalism. . . aggressive Russophobia and neo-Nazism ”is a gross exaggeration. Ultra-nationalists played a part in the Maidan revolution of 2014 that ejected Viktor Yanukovich, the Russian-backed president. However, in the parliamentary elections that followed the revolution, the extremists fared very poorly.

Putin’s speech amounted to a flat denial of Ukraine’s identity and right to sovereignty. The question now is whether he plans more steps to dismantle the Ukrainian state.