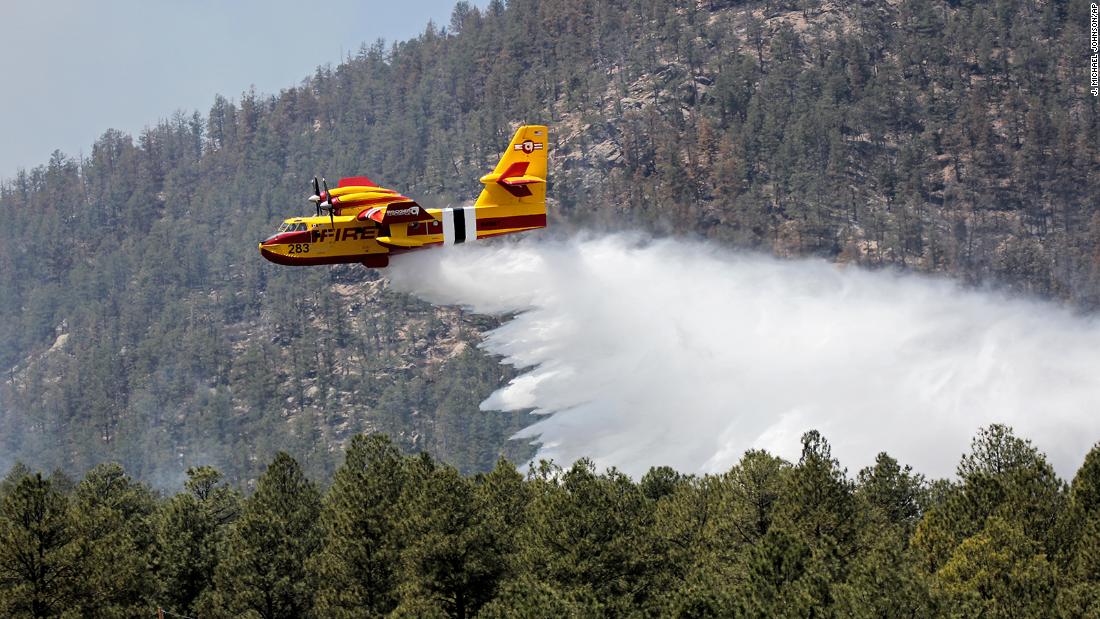 The Calf Canyon Fire began last week and combined with the Hermits Peak Fire, which was already burning near Las Vegas, New Mexico. By Saturday morning Calf Canyon had scorched more than 97,000 acres – a huge size jump from the roughly 65,800 acres it had burned a day before. The blaze was 32% contained Saturday, according to the interagency reporting website InciWeb.

Many communities in the county remained under evacuation orders Saturday, as did others in neighboring Mora County, according to a news release from the Office of Emergency Management of San Miguel County and the City of Las Vegas.

“This emerging situation remains extremely serious and refusal to evacuate could be a fatal decision,” officials said in the release.

New Mexico Gov. Michelle Lujan Grisham also appealed to residents to heed evacuation orders, saying on Twitter, “buildings can be replaced, but you can not.”
The spreading flames were pushed Friday by “high wind speeds” in two directions: east toward Las Vegas and south across Gallinas Canyon, according to the New Mexico Fire Information website.
“We were watching the fire march a mile, about, every hour,” said Jayson Coil, an operations section chief with the Southwest Area Incident Management Team, during a Saturday briefing.

The blaze was about three quarters of a mile to the closest house in Mineral Hill during the Saturday briefing, Coil said.

On the east side of the blaze, there was a new threat Saturday for areas including Las Tusas, Manuelitas and the Sapello area, Coil added.

And fire conditions are expected to worsen.
While the northern part of the state was expected to get a break from strong winds Saturday, more powerful winds were forecast to return Sunday along with “more critical fire weather conditions,” the Albuquerque National Weather Service said.

More than 1,000 people were battling the Calf Canyon and Hermits Peak Fires, and officials are investigating what may have started the flames.

The blaze has scorched more than 56,000 acres and was 56% contained Saturday morning, according to the fire information website.
The fires are part of a series of devastating blazes that have torched parts of the state in recent weeks.
The state has seen wildfires burn more acres so far this year – more than 173,000 – than in seven of the last eight years, according to statistics from the Southwest Coordination Center.

And it could get worse. The peak of the fire season in New Mexico is not until June, with the months that usually have the highest number of fires being June, May, July and April, in that order.