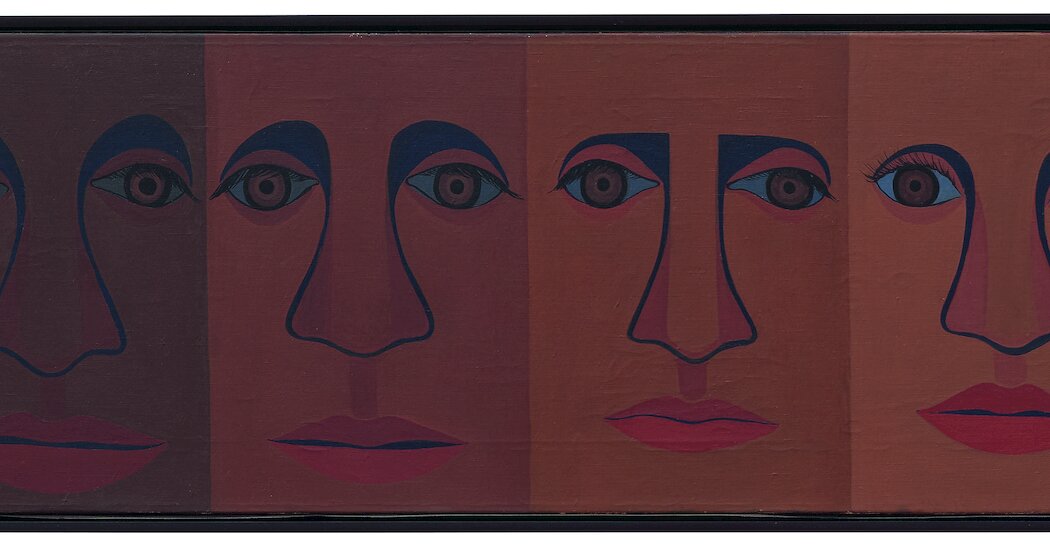 In 1970, Faith Ringgold made her first big sale. Chase Manhattan Bank almost bought “Flag for the Moon,” a painting that reminded them of a Jasper Johns – until they realized these stars and stripes were letters spelling a violent racial slur.

So instead they picked “The American Spectrum,” a row of abstract faces painted in a gradient of skin tones from dark to light. Part of her “Black Light Series,” begun in 1967, the piece uses darkened oil paints to render figures that look black against a white backdrop; but “viewed side by side, the different nuances of color become visible.” As Ringgold, her daughter Michele Wallace and Kirsten Weiss write in FAITH RINGGOLD: POLITICS / POWER (Weiss Publications, $ 49.95), the piece was originally called “Six Shades of Black,” but the new title “was deemed more amenable to collectors and less likely to encourage inconvenient questions about ethnic and racial representations.” The bank paid $ 3,000 for it, and still has it today.

But a name is just that, and as this book shows, all of Ringgold’s work in the ’60s and’ 70s pushes the viewer toward just such questions: about the whiteness of women’s liberation, about the exclusion of Black artists from the establishment, about criminal justice. The oil paintings, collages, photos and textiles herein trace 25 years of US history through the eyes of a key figure in the Black Power and Black feminist movements. “I did not want people to be able to look, and look away,” she says. “I want to grab their eyes and hold them, because this is America.”

Created in 1970 for the majority-white Committee to Defend the Panthers (1970), this poster – a collage of paper, pencil and press type in the colors of the Pan-African flag and of the Black liberation movement – was seen as “too aggressive in a climate in which racial separatism and violence were a volatile subject, particularly for white people. ”

Born in Harlem in 1930, Ringgold was the youngest of three children of Willi Posey Jones, a seamstress and clothing designer. In the 1970s, Ringgold began using textiles to create wearable sculptures of important figures in her own life.

Ringgold and five other Black women artists – Kay Brown, Jerrolyn Crooks, Pat Davis, Mai Mai Leabua and Dingda McCannon – formed the Where We At collective in 1971, in response to the male-dominated Black Arts movement and white-dominated mainstream feminism.

Named for the Attica prison inmates who died in a 1971 uprising in protest of the “deplorable conditions” there, “The United States of Attica” was Ringgold’s most widely distributed poster of the decade. A map of oppression in this country since the 1700s, the offset print includes “a laconic invitation to add further acts of violence,” which “emphasizes the historical continuity and ceaselessness of violence as a defining characteristic of the development of the United States of America.” . ”

Lauren Christensen is an editor at the Book Review.