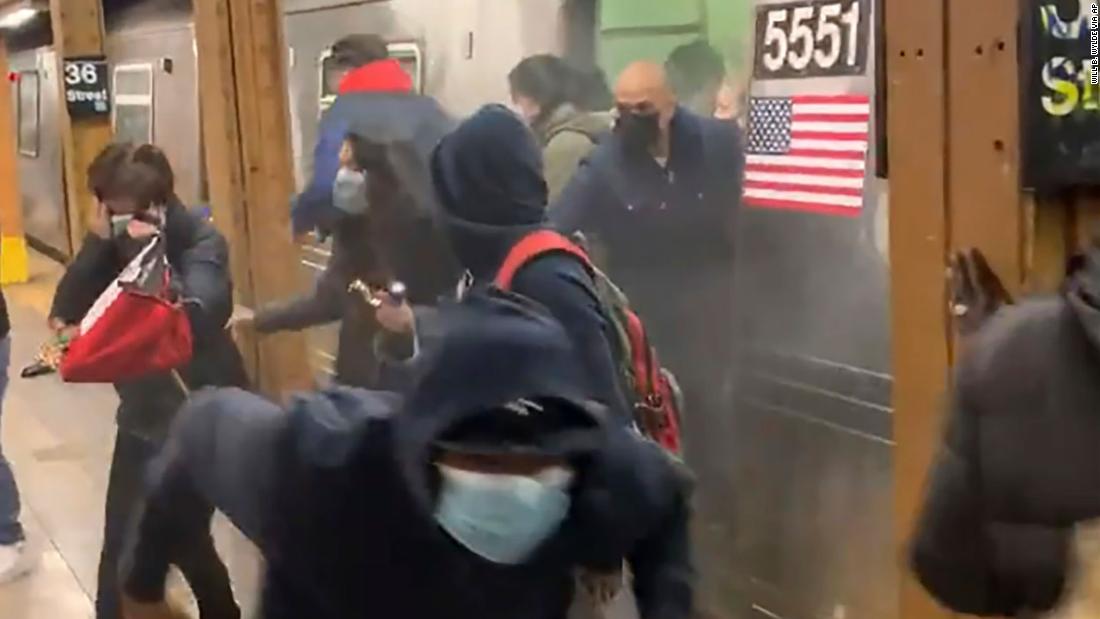 But after the train started moving to the next stop, the man set off a “smoke bomb,” Benkada said.

It was “the worst pain in my entire life,” the 27-year-old Benkada, who was shot in the back of the knee, said in one of several interviews he gave CNN on Tuesday and Wednesday while recovering post-surgery in a hospital bed.

Benkada and others on the train described a harrowing scene: Smoke, a mad rush away from its source – and then what sounded like fireworks, followed by a panicked realization that people were hurt and bleeding.

As passenger Claire Tunkel recalled: “When I heard people saying, ‘I’m hurt; there’s so much blood’ … that’s when my mind changed to, ‘This is not fireworks.'”

You had a duffel bag

Benkada, a housekeeping manager at The New Yorker hotel, said the person he sat next to had a duffel bag, was wearing a mask, and appeared to be wearing a Metropolitan Transportation Authority vest.

When the smoke started, “all you see (is) smoke – black smoke … going off, and then people bum-rushing to the back,” Benkada said.

“This pregnant woman was in front of me. I was trying to help her. I did not know there were shots at first. I just thought it was a black smoke bomb.

“She said, ‘I’m pregnant with a baby.’ I hugged her. And then the bum-rush continued. I got pushed, and that’s when I got shot in the back of my knee. ”

The noise, he too said, at first sounded “like fireworks going off.”

The shooting started about 20 seconds after the train took off, and felt like it lasted for 1 to nearly 2 minutes, Benkada said.

As people flocked to the end farthest from the smoke source, someone broke down a door at that end, hoping to cross to the next car, but that car had its own door that did not open, Benkada and others said.

Benkada heard other people in pain, but could not see them or the suspect because of the smoke, he said.

Adding to the riders’ terror, the train did not seem like it was heading to the next station as fast as it could. It stopped at least once between stations, riders said.

“The conductor said there was a delay, because there was train traffic ahead of us,” rider Yav Montano, who said perhaps 40 to 50 people were in the car, told CNN.

“Thank goodness the train moved within a minute. I do not know what could have happened if we were stuck there for longer.”

People were crying out for help and falling down, witness says

Tunkel, 46, said that before the chaos started, she thought she’d seen the person police have described as a suspect in the shooting.

“He said there was urine in the seat (next to him), do not sit there.” However, she said, “with masks and hats and things like that,” she can not be sure that was the suspect.

She said her first indication something was wrong was hearing “something drop on the floor,” and smoke “just started coming out.”

Tunkel ran with others to the car’s other end, but the train filled with smoke. “And that’s when … what I thought was fireworks, at the beginning, started going off,” she said.

She said she heard people crying out for help and others who said they were bleeding.

‘Clothes … were covered in blood’

Montano, who was trying to get to work in Williamsburg, said he also thought the noise was “like fireworks on the floor.”

But just in case, he said, he moved behind a wooden plank on the other side of a chair, by some doors – “I moved myself out of the way.”

Eventually, he said, he saw some people “whose clothes … were covered in blood.”

“There were some people – it did not even seem like their blood, because the person whose pants had … blood on it was OK and walking and helping the other people,” Montano said.

On his phone, he recorded a few seconds of video showing people holding their hands to their mouths in the smoky car “after the popping and shooting,” he said.

“The whole car was engulfed in smoke. Like, I had a mask on in the train; I could not even use my mask anymore because it was black with smoke,” Montano said.

The train eventually arrived at the 36th Street subway station In a video taken from the platform, people rush off the train after it arrived.

Smoke pours out of the car where the shooting took place, and people can be heard screaming. Someone helps an injured and bleeding person off the train, and another man is seen hobbling off the train shortly afterwards.

Images taken by others at the scene show the subway platform streaked with blood and people sitting and lying on the train platform following the incident.

Now off the train, Tunkel said she saw a man with a gunshot wound. She said she took off her jacket and tied it around his leg.

Tunkel, went to a hospital for smoke inhalation, said several victims were lying on the floor of the subway platform after the train arrived at the station.

She said Wednesday she was “doing alright” physically.

“I have two small children that … go to school nearby, and they had a lockdown yesterday. So explaining this to them was definitely probably the hardest part of all of this. … I’m just taking it moment to moment . “

Benkada said that when he got off the train, he “looked at all the blood and (said) ‘this ain’t right.'”

He went up some stairs, and told a man in a booth that “I needed a lot of napkins – I’m bleeding.” Eventually, two firefighters helped him.

Doctors told him the bullet grazed his kneecap. He is expected to walk on his own after several weeks on crutches.

At the hospital Wednesday, Benkada still was coping with pain, and seemed to have made up his mind about one part of his future.

“I do not think I can ever ride the train again,” he said.