Russian forces pounded Ukraine’s cities and moved tens of thousands of troops to encircle Kyiv as Vladimir Putin turned to more brutal military tactics on the sixth day of his invasion.

Volodymyr Zelensky, Ukraine’s president, accused Russia of war crimes after a missile hit the center of Kharkiv in one of the most destructive attacks on a densely populated urban area since Moscow launched its military offensive.

Stung by five days of unexpectedly slow progress, Russia has shifted its approach, pouring more troops and armor into Ukraine and stepping up its use of artillery and other unguided weapons on cities including Kharkiv, Chernihiv, and Kherson.

The rocket attack on Ukraine’s second-largest city Kharkiv on Tuesday targeted a key local government building, which was engulfed by a ball of fire. Videos of the aftermath showed the entire Independence Square covered in rubble and the windows blown out of several adjacent buildings.

In a video statement, Zelensky described the rocket attack on Kharkiv’s central square as “outright, undisguised terror”. “After this, Russia is a terrorist state,” he said. “No one will forgive. No one will forget. ”

Satellite imagery has also shown a convoy of Russian armor and support vehicles up to 40 miles (64km) long closing in on Kyiv from the north, with the aim of bringing overwhelming force to Ukraine’s capital of 3mn people.

“The situation in Kyiv remains tense,” Ukraine’s defense ministry said. “The Russian occupier is using a tactic of destroying civilian infrastructure. . . Columns of Russian equipment continue to move into the suburbs of the capital. ”

Kharkiv, which is close to the Russian border, has been under heavy Russian bombardment since Monday, with residential areas being targeted leading to numerous civilian casualties.

As the impact of hefty western sanctions on Russia grew, French finance minister Bruno Le Maire promised to wage a “total economic and financial war” against the country, saying: “We will provoke the collapse of the Russian economy.”

His comments were met with scorn by Moscow. “Watch your tongue, gentlemen!” tweeted Dmitry Medvedev, a top security official and former Russian president. “Do not forget that in human history, economic wars quite often turned into real ones.”

Kremlin spokesman Dmitry Peskov said the sanctions would not make the country change its course in what it is calling a special military operation. “None of us will change our consistent position,” Peskov told reporters.

Zelensky used a series of statements to accuse Russia of breaking the laws of war with indiscriminate attacks, adding Ukraine had suffered 56 missile strikes since the invasion began, and that Russia had fired a further 113 cruise missiles.

“A peaceful city. Peaceful residential areas. No military object, ”Zelensky said of the Kharkiv strike. “The Russians knew where they were shooting.”

The Ukrainian railway service said on Tuesday it had attached additional cars to its Kyiv-Warsaw train for the evacuation of women and children from the capital. Arrangements had been made to provide evacuees with food and shelter once in Poland, it added.

“We are extremely concerned that the conflict is affecting very densely populated areas,” Ukraine head of the International Committee of the Red Cross Florence Gillette said. “When neighborhoods become the frontline, the consequences for people – including children, the sick, the elderly – are simply devastating.”

The attack on Kharkiv followed the first day of negotiations on the Belarus-Ukraine border on Monday between delegations representing Moscow and Kyiv. The results were inconclusive with both sides agreeing to continue talks. 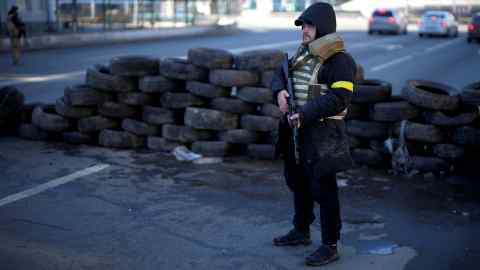 The negotiations lasted five hours, Alexander Lukashenko, Belarus’s authoritarian leader, was cited as saying on Tuesday by the state Belta news agency. He said he saw cause for some optimism.

Zelensky has pushed for deeper international diplomatic support, appealing on Monday for the EU to open a path to membership for Ukraine.

Across the country, the UN Refugee Agency estimated about 500,000 Ukrainians have already fled to neighboring countries including Moldova, Romania and Poland.