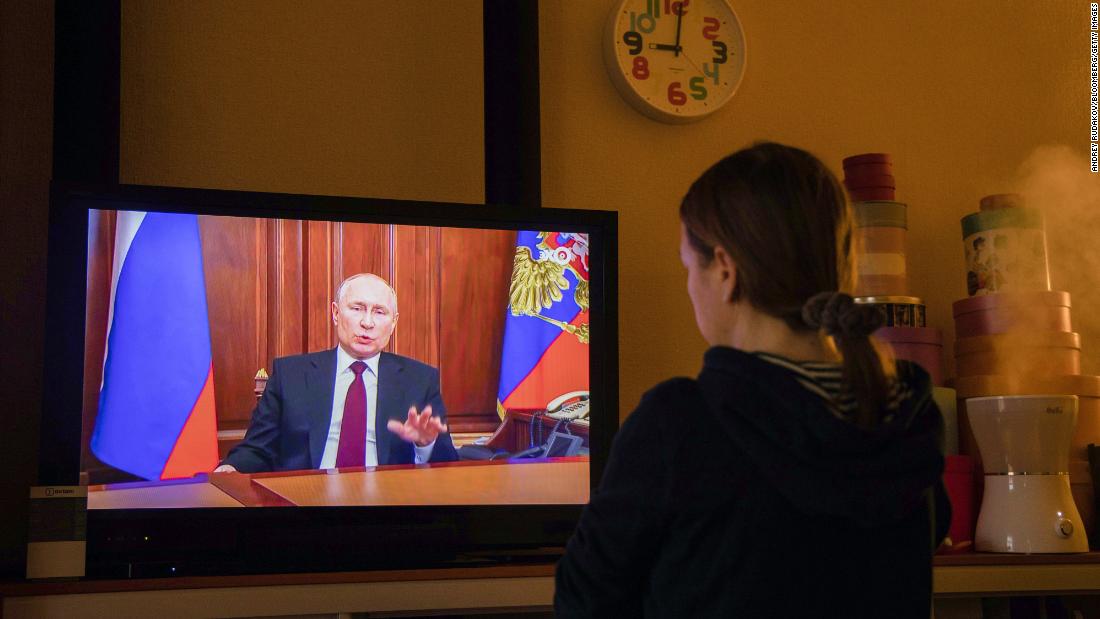 Moscow’s MOEX stock index dropped 4% after shedding more than 10% on Monday, bringing losses so far this year to over 20%. In total, more than $ 40 billion has been wiped off the value of Russian stocks this week alone.
The ruble fell towards 81 versus the US dollar on Tuesday, its weakest level in more than a year and close to its record low. The moves prompted Russia’s central bank to announce measures to support banks, including a provision that will allow them to use last Friday’s prices for stocks and bonds when reporting their financial positions.

More pain could be on the way.

“We expect further declines near-term in the Russian stock market,” analysts at JPMorgan Chase wrote in a note to clients on Tuesday. The Wall Street bank downgraded Russian equities to “neutral” from “overweight.”

Damage to Russia’s markets and economy would be limited if its troops do not advance beyond the parts of eastern Ukraine that Putin recognized as independent on Monday, according to analysts. But Russia would pay a higher price if further aggression causes the West to respond with punishing sanctions that could cut the country’s banks off from the global financial system and make it difficult to export oil and natural gas.
Germany said Tuesday it was halting certification of the Nord Stream 2 pipeline, built by Russia’s Gazprom under the Baltic Sea with the aim of boosting its capacity to supply Europe with natural gas without piping it through Ukraine.

Analysts at Capital Economics said Tuesday that the most commonly discussed sanctions could knock 1% off Russia’s gross domestic product, but more aggressive measures such as blocking Russia from the SWIFT global payments system could reduce economic output by 5%.

According to Capital Economics, Russia is in a better position to withstand an economic shock than in 2014, when Western sanctions and plummeting oil prices combined to knock roughly 2.5% off the country’s GDP and spark a financial crisis. Russia has more foreign currency reserves, its external debt is lower, and its financial connections with major economies are smaller.

Russian ratings agency ACRA estimates that the country’s banks imported $ 5 billion worth of banknotes into foreign currencies in December, up from $ 2.65 billion a year before, according to Reuters.

US President Joe Biden plans to impose new sanctions on two parts of eastern Ukraine that Putin recognized as independent, the White House said Monday. But the United States is keeping other measures in reserve.

“The Western response has so far been … symbolic,” said analysts at Capital Economics. “The US and EU have said they will announce more sanctions today, though they are expected to still be at the very light end of the scale, in part so that more severe measures could be held back to deter Russia” from further aggression.

Much depends on Putin’s next moves.

“The key question now is how far into Ukraine President Putin wants to go,” said Societe Generale analyst Kit Juckes. “Clearly, pushing beyond the current area of ​​conflict would escalate the situation as Russian troops engaged with Ukrainian forces.”

Russia’s economy could be in for a major shock, but that does not mean there will not be blowback for other countries.

Russia is one of the world’s biggest producers of oil, and a major exporter of natural gas. Investors fear that conflict in Ukraine could limit or stop the flow of Russian gas into Europe, making it much more expensive for people to heat and light their homes.

In a worst case scenario, oil prices could surge as high as $ 140 per barrel, according to Capital Economics. That would add upward pressure to inflation in major economies around the world and make interest rate hikes more likely.

“Given the current high rates of inflation, and corresponding concerns about it feeding higher inflation expectations, it’s possible that this adds to the list of reasons for policymakers to raise interest rates,” wrote analysts at Capital Economics.