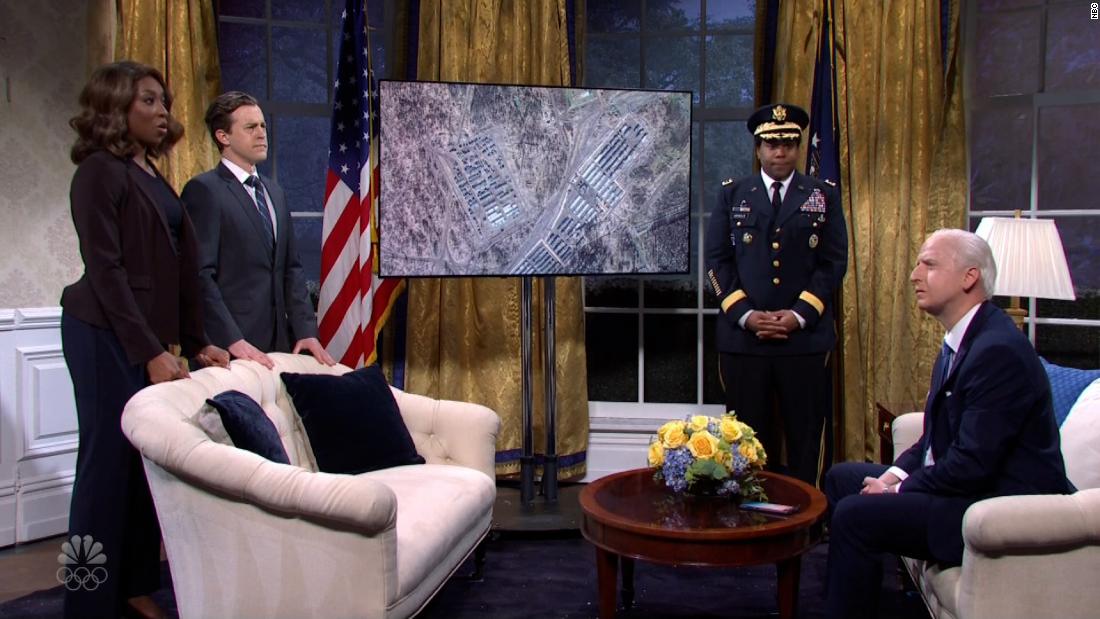 The scene opened with Biden, played by James Austin Johnson, surrounded by advisers in the Oval Office, including a military adviser portrayed by Kenan Thompson.

Johnson’s Biden asks if NATO forces are “ready to back us up” as Russia continues to prepare for a possible invasion of Ukraine.

Thompson’s military official informs Biden that all NATO countries are sending supplies to Ukraine except Germany.

“Oh man, if Germany does not want to go to war, you know it’s bad,” says Johnsons Biden.

Two advisers played by Ego Nwodim and Alex Moffat then tell the president that Russia’s military presence at the Ukrainian border “may be the least of our problems” because Russian disinformation on social media has left Ukrainians unaware of what to believe.

“Russia also tried it during our last election. But it did not work,” Johnson Biden said.

“Well, 40% of Americans think you lost the election, so it did a little bit,” Thompson’s adviser replies.

The group then reviews several disinformation posts allegedly circulating on Ukrainian Facebook aimed at increasing support for a Russian invasion.

One headline reads: “Ukrainian border invades Russian troops”, while another says: “Russian forces surround Ukraine just to give it a big hug.”

“I want to break my New Year’s resolution and say it: malarkey!” exclaims Johnson’s Biden.

The adviser, played by Nwodim, then says that the Russian disinformation campaign is bringing the United States into it, pointing to a presumed post, “American CDC strongly recommends that Russia invade Ukraine.”

“Did the CDC really say that,” Thompson’s military adviser asks.

“For a few months in 2020. Science changed so fast,” Biden replies.

Another misinformation post reads: “Neil Young removes music from Spotify unless Ukraine surrenders,” a reference to the artist removing his music from the streaming service due to vaccine misinformation spread by comedian and podcaster Joe Rogan.

The group then reviews several memes and a TikTok video showing a Russian military member dancing with a Ukrainian soldier.

Johnson’s Biden criticizes the choreography in the video and says, “I want to log on to my Finsta and burn those guys in the comments.”

The group then decides to “fight fire with fire” and bring in a teenage girl, played by Chloe Fineman, to organize a campaign on social media. “I’m a junior at a vicious girls’ high school, and you’re all working for me now,” she tells the room.

“Let’s just do something fun and simple that everyone can get behind, like a drone attack,” Johnson Biden suggests.

The teen counselor then says her generation does not believe in drone strikes, but prefers to “break down our enemies psychologically.”

“That’s why I go to DM Putin and say, ‘Oh my God, I loved your outfit the other day. Was it Old Navy?'” Says Fineman’s adviser. “He’s already in a spiral … In three weeks he will have completely lost his mind,” she adds.

The group then gathers for the signature “Live from New York, it’s Saturday night!”