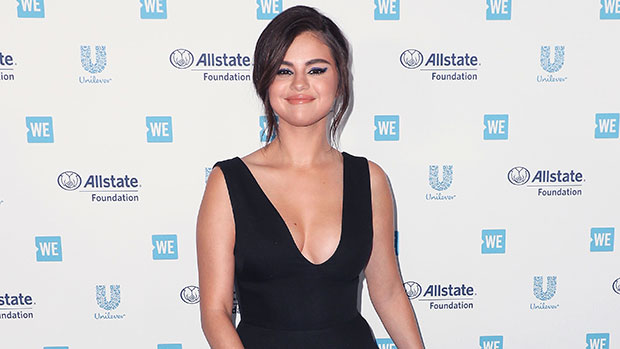 Selena Gomez has become quite the chameleon in her TikTok videos, as her latest clip has fans gagging over her impersonation. The Only Murders in the Building star shared the hilarious video on April 20, where she lip syncs a popular sound bite between two apparent BFFs. Selena looked simply amazing while doing so, relaxing on a bed in a plunging white tank top, with her chestnut hair pinned back in a bun.

“My best friend of 16 years told me she does not want to be friends anymore,” Selena says in the voice over, with her friend chilling on the bed in the background. “That is not what I said,” her friend reenacts. “Then what did you say,” Selena chimes in. “That I’m not gonna drink with you tonight,” the friend replies. “Same thing,” Selena muses.

Her followers were feeling the video, as one wrote in the comments section, “I love seeing you active on tik tok,” while another posted, “she is the queen of voiceovers.” It’s no surprise they would make such remarks, as Selena had shared another funny lip syncing TikTok from the day before!

In it, the “Heart Wants What It Wants” hitmaker teamed up with her famous pal Camila Cabello to reenact a scene from the reality show Dance Moms. The two singers sip on martinis as Camila mouths the first line, “And then there were two.” Selena joins in, pretending to say, ““ Nobody likes us. The two bitches are left. ” They then both laugh hysterically while taking a drink.

The TikToks are just par for the course for the Rare Beauty cosmetics founder, as she has been tearing it up lately for her 38 million followers on the social media platform. The multi-hyphenate entertainer has tackled everything from poking fun at her relationship status (“Maybe this is why I’m single.”) To clapping back at body shamers (“B ** ch, I am perfect the way I am.” ). Whatever the case, keep ’em coming, Selena, we’re here for it!