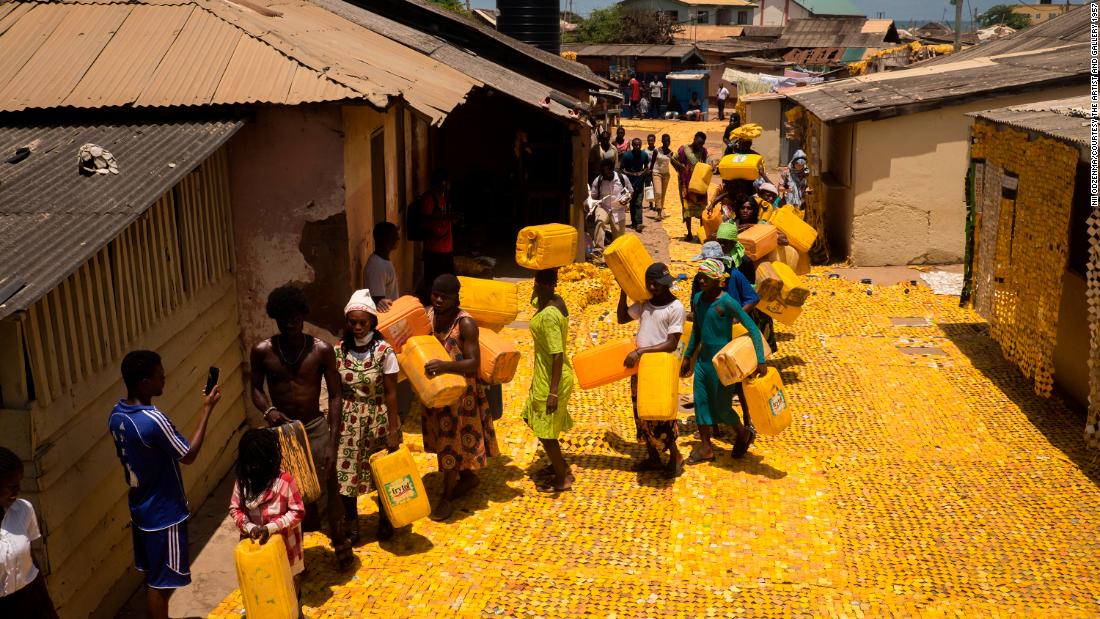 There’s a real-life yellow brick road forming in Ghana, and it shares at least one thing in common with the fictional path it’s named for.

Much like Dorothy in the story “The Wonderful Wizard of Oz,” who must follow a magical yellow route to find a way back to Kansas, Serge Attukwei Clottey – the artist behind Ghana’s “Yellow Brick Road” – is motivated by a longing for home.

“As an artist, I’m interested in migration,” Clottey said on the CNN original series Nomad. “Not as in human, but migration as in objects.”

The objects used to create Clottey’s work carry a special significance in Ghanaian culture. The “Yellow Brick Road” is composed of deconstructed “gallons,” or yellow plastic jerrycans that were originally containers for imported cooking oil. They are widely repurposed to carry water amid the country’s ongoing water shortage, and got their name during a particularly bad time for water access: the tenure of President John Kufuor, who was in power from 2001 to 2009. That’s when they became known as ” Kufuor gallons, “or simply” gallons. “

As a child, Serge Attukwei Clottey used “gallons,” or yellow plastic jerrycans to collect water for his household in Ghana. Now, the containers are central to his art. Credit: Nii Odzenma / Courtesy the artist and Gallery 1957

They are still a common sight in Ghana, where 1 in 10 people has to travel up to 30 minutes to collect water, according to UNICEF. A powerful emblem of the struggles of everyday life, they have also become a symbol of African art, since Clottey put them at the center of his “Afrogallonism” movement.

Clottey grew up using the containers to fetch water for his house before moving in with his uncle, who had a running tap. But the gallons, which actually have a capacity of 20 to 25 liters, or about 6 US gallons, then took on a different meaning for the Accra-born artist.

“I found them as available materials that I can work with for a long time. So I put them together like a wall and then painted on them,” Clottey said recently on CNN’s African Voices.

Soon, the containers started to pile up. “I did not have a place to store them, so it was becoming a problem,” he said. He then had the idea of ​​cutting them up, which was not initially well received by the local community. “When I started cutting them, the entire community was against that because they thought they needed them to survive and I’m getting rid of them, I’m destroying them. So it was a whole conflict, I had to engage them in my studio and tell them that it’s not hygienic to store water in them. ”

He demonstrated the concept by showing the effects of leaving the jerrycans out in the sun and filled with water for a few days. Not only can plastic particles leak into the water, but the high temperatures create a breeding ground for bacteria, making the water potentially unsafe.

When Clottey started cutting up the jerrycans, the community initially was not very happy about it. Credit: Nii Odzenma / Courtesy the artist and Gallery 1957

“So they began to get rid of them in their system. It’s a gradual process, where they get rid of the old ones, they bring them to my studio, they donate some, I have to buy some from them. You know, we sort of trade with them and all that, “he said.

Clottey then started cutting up the jerrycans and incorporating the pieces into his art, creating his signature yellow tapestries and using the top of the cans as masks in photographs, with the round opening symbolizing a human mouth.

In 2016, after cutting up hundreds of them, he started the “Yellow Brick Road” – his largest public installation – in Accra’s Labadi Beach area, where he grew up.

The pieces are stitched together and then, with the help of the locals, used to carpet the streets of Labadi. The work is meant to symbolize the resourcefulness and resilience of the community, but its bright boundaries also highlight the fact that many local residents, Clottey’s family included, cannot offer proof of ownership of their home or land due to the lack of paperwork.

“Yellow Brick Road” is meant to symbolize the resilience of the community and also the issue of property rights. Credit: Nii Odzenma / Courtesy the artist and Gallery 1957

“My family migrated from Jamestown to Labadi and they were traveling on the coast. They were trading alcohol and beef, and based on the trade relationship my family had with the people of labor, they got a place to settle, and it was a verbal agreement. There was no documentation, “he said on African Voices.

After 200 years, the issue of property rights is still coming up, and the “Yellow Brick Road” doubles as a powerful visual reminder.

“I use the work to sort of demarcate the property through the installation. Ever since I started the project, I have people coming out to tell the story of my family, and that is creating an interesting dialogue. Hopefully that could be used to defend the family property in court, “Clottey said. “I’m very interested in how, in places around Ghana, people are going through this property conflict, because some of the properties were inherited through verbal agreements, without paperwork and documentation. I think that’s a very major part of my project.”