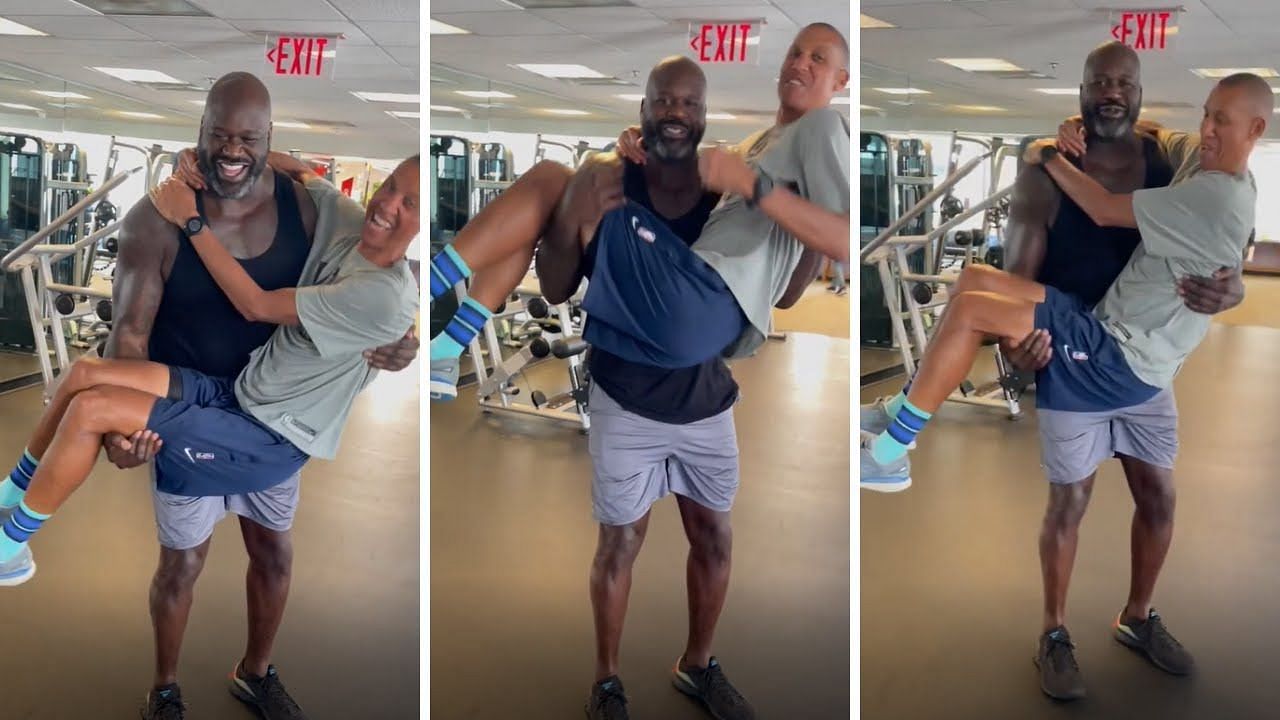 The “NBA on TNT” features Hall of Famers Shaquille O’Neal, Charles Barkley and Reggie Miller. While covering the playoffs, Shaq and “Uncle Reg” took much-needed time to work out.

Sometime during the workout, the session turned into a little horseplay. That could be expected, considering Shaq was present. Miller, who’s well aware of O’Neal’s desire to get back in shape, wanted to see just how strong the LA Lakers icon remains.

Here’s what happened when both icons tried a uniquely hilarious curl for O’Neal:

O’Neal was poking at Miller’s courtside TNT partner, former coach Stan Van Gundy. Miller and SVG have been assigned to call the series between the Golden State Warriors and Dallas Mavericks, who will play Game 2 on Friday night.

The legendary Indiana Pacers shooting guard’s playing weight was 185 pounds. It’s safe to say that he’s significantly heavier than that since retiring in 2005. Despite the extra weight, Shaq curled him five times while talking, taking a shot at Van Gundy.

Before attempting what was potentially a risky maneuver as both men are no longer in peak shape, Miller comically pleaded with Shaq not to drop him. His fears were unfounded as the four-time NBA champion lifted him like he was a set of heavyweights.

Perhaps more than O’Neal’s incredible strength, which was expected based on his frame, was how toned Shaq looked. From the video, it seems like the three-time finals MVP is seriously keeping his word to regain his fitness.

The “Black Superman’s” listed playing weight was 325 pounds. From the looks of it, he’s likely to be well below 300 pounds.

The series opener between the Bay Area team and Mark Cuban’s squad was a blowout as Golden State romped 112-87 on Wednesday. Dallas looked out of sorts trying to keep up with the Warriors’ intensity and pace. Golden State’s defense also forced Mavericks star Luka Doncic into the worst playoff game of his career.

Dallas looked flat as the game progressed, probably due to an emotionally draining seven-game series against the Phoenix Suns in the semifinal round. The Mavericks have had enough time to dissect what they did wrong and should have the necessary counters to what the Warriors did in Game 1.

Reggie Miller and Stan Van Gundy repeatedly lavished praise on the Warriors’ ball and personnel movement in Game 1. It’s a far different beast compared to what they faced in the first two rounds of the playoffs.

They were also impressed by Andrew Wiggins’ impeccable defense on Doncic, who struggled all game. Wiggins’ full-court press defense on the Slovenian star kept Dallas from comfortably executing their offensive sets.

The Mavericks, however, have shown incredible poise and resilience in the playoffs. Expect Shaquille O’Neal, Miller and Van Gundy to have a more entertaining game to call when Game 2 starts.