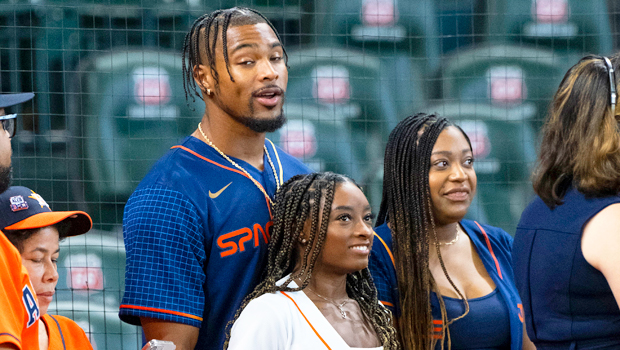 Simone Biles is always rocking some sort of sexy short shorts and that’s exactly what she did when she attended the Houston Astros vs the Los Angeles Angels of Anaheim’s opening day in Houston, Texas on April 20 with her fiance, Jonathan Owens. The 25-year-old Olympic gymnast showed off her incredibly toned legs in a pair of tiny white denim shorts and an Astros jersey.

Simone’s high-waisted, super-short white shorts were distressed at the hems and she tucked a skintight white tank top into them. On top of her shirt, she wore a white button-down short-sleeve jersey which she kept unbuttoned and she topped her look off with white low-top Converse sneakers.

If there’s one thing for sure about Simone, it is that she loves daisy dukes and just recently she wore a similar pair when she said yes to the dress. She rocked a similar outfit to her baseball game look while wedding dress shopping when she wore a pair of high-waisted distressed jean shorts with a tight white tank top tucked in. She topped her look off with a long white blazer and crisp white sneakers.

In the photos, Simone had her hair down and parted in the middle in loose waves and she posted two photos of herself in the outfit with the caption, “said yes to the dress (es).”

Simone and Jonathan announced their engagement on Feb. 15, and the couple sealed the deal with a massive oval-cut diamond that was insanely gorgeous. Simone posted photos of the engagement as well as up-close photos of the diamond ring and it is stunning.