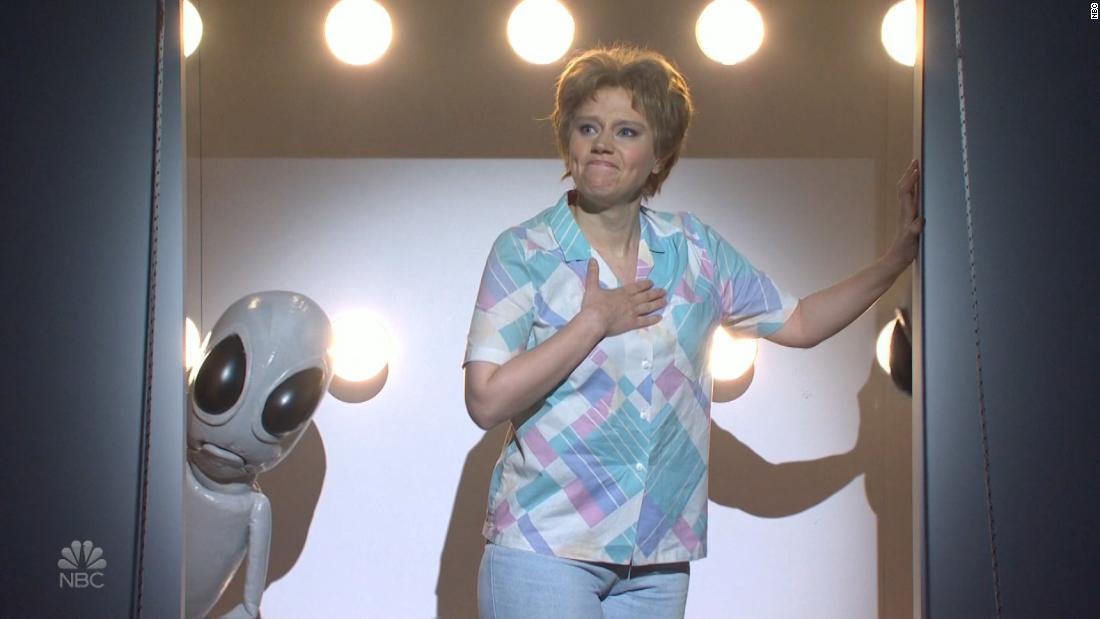 On Saturday night’s episode, the NBC variety show bid adieu to Kate McKinnon and Pete Davidson in subtle, but emotional ways. The show first said goodbye to McKinnon by opening the show with a recreation of one of the comedian’s most memorable sketches, “Close Encounter.”

Saturday’s cold open brought back McKinnon’s Miss Rafferty – an alien abductee who goes through a rougher experience than her counterparts.

After McKinnon’s Miss Rafferty explains what happened to her (in vivid and raunchy detail, no less) during her alien abduction, two government agents played by Aidy Bryant and Mikey Day explained that she must now go with the aliens who took her.

This led to a very poignant moment for McKinnon who stood on the makeshift spaceship and allowed her character and herself to say goodbye.

“Well, Earth, I love you, thanks for letting me stay awhile,” McKinnon’s character said with her hand on her heart, looking out into the audience.

She then said the show’s signature catch phrase, “Live … from New York. It’s Saturday night!” This was followed by thunderous applause for McKinnon.

As for Davidson, he got one last segment on “SNL’s” Weekend Update.

“I never imagined this would be my life,” Davidson said. “Back then, I was just a skinny kid that no one knew which race I was. And now everyone knows I’m White because I became hugely successful while barely showing up to work. Look at me now, I’m aging like an old banana. “

Davidson added during the segment that “SNL” creator Lorne Michaels told him during his first audition that he did not think Davidson was right for the show, but “let’s screw this up together.”

“And that’s exactly what we did,” Davidson said. “And that’s why people who do not think I deserve this job should not hate me since we have so much in common. Like, if anything I should be inspire hope that literally anyone could be on ‘Saturday Night Live.'”

Before the show, Davidson gave his official farewell on Saturday via Instagram writing that he “got to share so much with this audience” and “literally grow up in front of your eyes.”

“We were together through the good and the bad, the happiest and the darkest of times,” Davidson continued. “I owe Lorne Michaels and everyone at SNL my life. I’m so grateful and I would not be here without them.”

Davidson thanked the show for teaching him “life values” and said, “SNL is my home.”

“I’m so happy and sad about tonight’s show. For so many reasons I can not explain,” he wrote.

Bryant also got a send-off during Weekend Update when she appeared alongside Bowen Yang as their recurring trend forecasters characters. The segment ended with Bryant declaring “10 nice years” as “in” and getting roses and a kiss on cheek from Yang and Weekend Update co-anchor Michael Che.

Variety reported Friday that McKinnon, Davidson, Bryant and Kyle Mooney are all expected to leave the show at the end of this season.