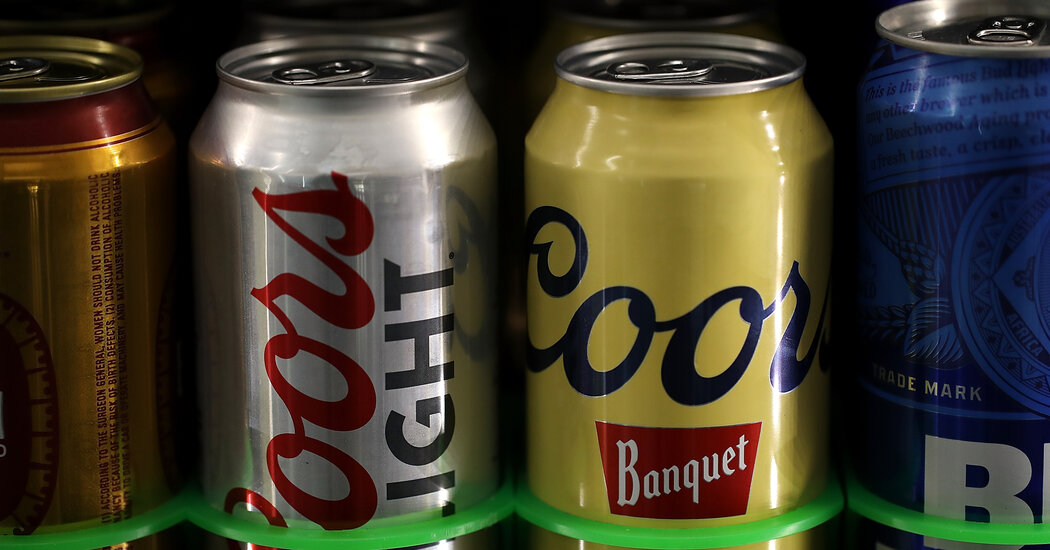 The plastic rings ubiquitous with six-packs of beer and soda are gradually becoming a thing of the past as more companies switch to greener packaging.

The changes are taking different forms – from cardboard to six-pack rings made with leftover barley straw. While the transitions can be a step toward sustainability, some experts say that simply switching to different packaging material could be the wrong solution or not enough, and that more plastic needs to be recycled and remade.

This month, Coors Light said it would stop using plastic six-pack rings in the packaging of its North American brands, replacing them with cardboard wrap carriers by the end of 2025 and eliminating 1.7 million pounds of plastic waste every year.

The initiative, which the company said would be supported by an $ 85 million investment, is the latest by a major brand to replace the six-ring plastic loops that have become a symbol of harm to the environment.

Since the 1980s, environmentalists have warned that discarded plastic is building up in landfills, sewers and rivers, and flowing into oceans. One 2017 study found that plastic polluted all major ocean basins, and that an estimated four million to 12 million metric tons of plastic waste entered marine environments in 2010 alone.

Plastic rings have been known to entangle sea animals, sometimes staying stuck on them as they grow, and are more often ingested by animals. While cutting up the plastic rings became a popular way to prevent the creatures from getting ensnared, it also posed issues for companies trying to recycle, Patrick Krieger, vice president of sustainability for the Plastics Industry Association, said.

“When you were a kid, they taught you before you disposed of a six-pack ring that you were supposed to cut it into small pieces so that if something terrible happened that it did not catch a duck or turtle in it,” Mr . Krieger said.

“But it actually makes it small enough that it’s really hard to sort out,” he said.

Mr. Krieger said companies have for years preferred plastic-loop packaging because it was cheap and lightweight.

“It kept all those aluminum cans together in a pretty, neat and tidy way,” he said. “We now understand that we can be doing better as an industry and that customers are wanting to use different kinds of products.”

The material has been challenged by activists for the harm it can pose to wildlife and concerns about pollution. In 1994, the United States government mandated that plastic six-pack rings must be degradable. But plastic continued to grow as an environmental problem. With more than eight billion metric tons of plastic produced since the 1950s, 79 percent has piled up in landfills, according to the 2017 study.

In its announcement, Coors Light said it would pivot to use material that is 100 percent sustainable, meaning it is plastic-free, fully recyclable and reusable.

“Earth needs our help,” the company said in a statement. “Single-use plastic is polluting the environment. Water resources are limited, and global temperatures are rising faster than ever. We’re chill about a lot of things, but this is not one of them. ”

Coca-Cola produced 900 prototype bottles made almost entirely of plant-based plastic, excluding the cap and the label, and PepsiCo has committed to making Pepsi bottles with 100 percent recycled plastic in nine European markets by the end of the year.

By starting in select markets, companies can “take a local approach to identifying solutions that can be scalable,” Ezgi Barcenas, chief sustainability officer of AB InBev, said.

But “some healthy skepticism” is in order, Roland Geyer, a professor of industrial ecology at the University of California, Santa Barbara, said.

“I think there’s a big difference between companies just managing their reputation and wanting to be seen to be doing something, and companies doing something that is really meaningful,” Professor Geyer said. “Sometimes it’s really hard to tell those two apart.”

Elizabeth Sturcken, a managing director for the Environmental Defense Fund, said that Coors Light’s announcement and others that address the overuse of plastic is a “big step in the right direction,” but that companies must change their business models to tackle other environmental issues like emissions.

“When it comes to addressing the climate crisis, the hard reality is that changes like this are not enough,” Ms. Sturcken said. “Tackling the micro without addressing the macro is no longer acceptable.”

Alexis Jackson, an ocean policy and plastics lead for the Nature Conservancy, said that “ambitious and comprehensive policy” is needed to create a more sustainable future.

“Voluntary and intermittent commitments are not enough to move the needle on what may be one of the greatest environmental challenges of our time,” she said.

When it comes to plastic, some experts say simply switching to a different packaging material would not stop landfills from overflowing.

“If you transition from a plastic ring to a paper ring, or to something else, that thing will probably still have a decent chance of ending up in the environment or being incinerated,” Joshua Baca, vice president of the plastics division at the American Chemistry Council, said.

He said companies are being forced to change their business models. Some are increasing the amount of recycled content used in packaging.

Some craft breweries – like Deep Ellum Brewing Company in Texas and Greenpoint Beer & Ale Co. in New York – use durable plastic handles, which can be easier to recycle even though they are made of more plastic than the rings.

Mr. Baca said that can be beneficial if it is easier for the plastic to be remade rather than being thrown away.

For shifts to more sustainable forms of packaging to really make a difference, collecting and sorting need to be easier, recycling facilities updated, and less new plastic must be produced, Mr. Krieger said.

As for criticism from groups opposed to plastic, he said: “We’re not going to be able to recycle our way out of the problem of overconsumption.”