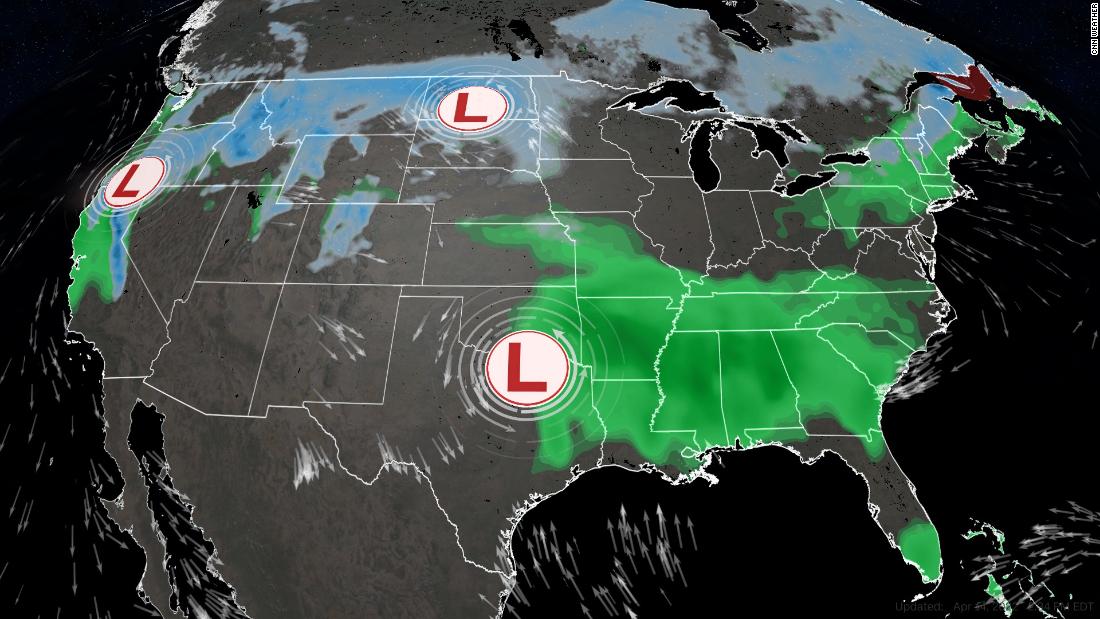 If you have outdoor plans this weekend you might need to pack your parka or umbrella.

Snow showers and temperatures 10 to 20 degrees below normal will not feel like spring.

Minneapolis normally sees a high temperature around 57 degrees, but this weekend it will be hovering around 40 degrees, making it feel more like early March.

Bismarck, North Dakota, normally sees a high in the mid 50s, but Saturday the expected high is 26 – the normal high temperature for mid-February.

Both cities will not only be cold this weekend but also looking at snow possibly on Sunday, so Easter egg hunts may be a bit more challenging this year.

Some cities such as New Orleans will see rain chances begin Friday afternoon and continue through Sunday night.

Atlanta, Birmingham, Alabama, and Jackson, Mississippi, also could have multiple rounds of rain and thunderstorms beginning late Friday evening and continuing through Sunday.

It’s all thanks to a front that essentially stalls over many southern states, bringing prolonged periods of rain.

While it will not be a washout for everyone, there are rain chances everywhere from Shreveport, Louisiana, to Savannah, Georgia, this weekend.

While most of the showers and thunderstorms are expected to bring less than 2 inches of rain total, there will be some stronger thunderstorms from Dallas to Panama City, Florida. These storms could also produce damaging winds as well as frequent lightning and heavy downpours.

For some cities – Columbia, South Carolina, and Charlotte and Raleigh, North Carolina – the rain is mostly on Saturday, allowing for drier conditions Sunday, and a chance to get in some outdoor activities without being soaked.

Mixed bag for the Mid-Atlantic and Northeast

Much like the cities in the Carolinas, many areas of the Mid-Atlantic and Northeast will only have to deal with the rain for half of the weekend.

New York, Boston, Baltimore, Pittsburgh and Philadelphia all have rain in the forecast for Saturday but will have a drier second half of the weekend.

After the system moves through the area, though, temperatures will drop back a bit Sunday.

Portland, Oregon, has had measurable rain or snow every day this week and could use a break. It will have to wait until Sunday for a day without any rain the forecast.

A new system pushing into the West Coast will bring additional rain (and snow to higher elevations) from Seattle down through San Francisco beginning Friday night.

The system begins in northern California before shifting north and eastward through the weekend.

The heaviest rain will be located over northern California, where 1-3 inches is expected through Sunday.

For the higher elevations of the Cascades, Sierra, and Olympic ranges, snow is also forecast Friday night into Saturday. By Saturday night that moisture pushes into the Intermountain West and brings some light snow across the Rockies.