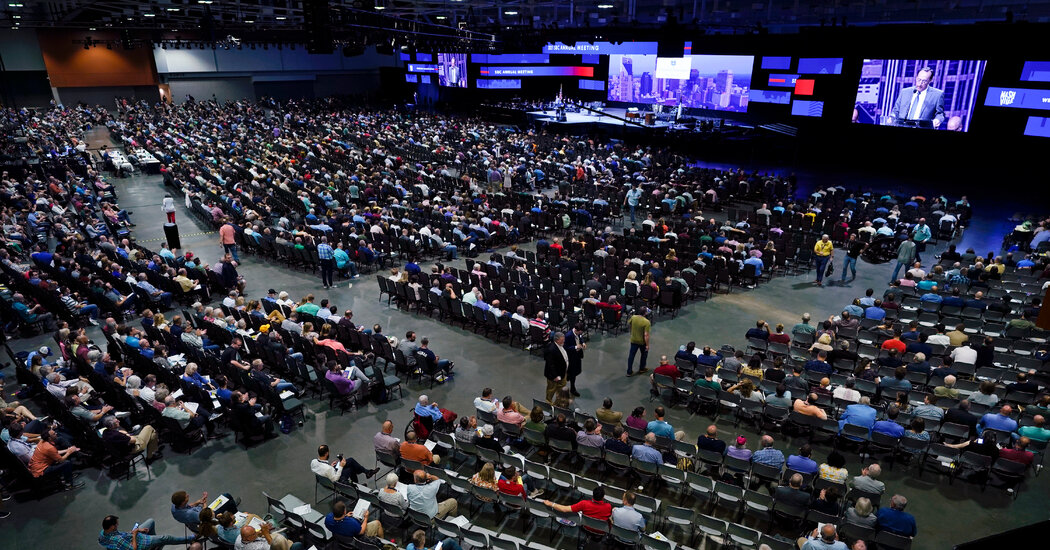 National leaders of the Southern Baptist Convention suppressed reports of sexual abuse and resisted proposals for reform over the course of two decades, according to a third-party investigation published by the convention Sunday. The report also said that a former president of the denomination was accused of sexually assaulting a woman in 2010, an accusation the report described as “credible.”

Sexual abuse allegations, and the church’s handling of them, have roiled the convention for years. After mounting pressure from survivors of sexual abuse in Southern Baptist settings, delegates at the denomination’s annual meeting last summer voted overwhelmingly to commission the report, and demanded that its 86-member executive committee hand over confidential documents in cooperation. The report covers abuse reports from women and children against male pastors, church employees and officials from the year 2000 to the present.

The reckoning in the Baptist denomination comes after the larger, long-running sex abuse scandal in the Roman Catholic Church, which has affected thousands of victims and bankrupt dioceses and is still being worked out through courts and settlements.

The country’s largest Protestant denomination, the convention has long emphasized that its decentralized structure meant it had little ability to force churches to take any action, because legally each church stood alone and did not report to higher authorities. But the report alleged that a handful of powerful leaders had the ability to stonewall abuse reports and attempts at accountability and reform.

It also found a pattern of intimidating survivors of sexual assault and their advocates, and said they were “denigrated as ‘opportunists.'”

In an internal email, August Boto, an influential executive committee member, described advocates’ efforts as a “satanic scheme to completely distract us from evangelism,” referring to the work of Christa Brown, a survivor, and the advocate Rachael Denhollander, who has worked with the denomination, as “the devil being temporarily successful.” Mr. Boto could not be reached immediately for comment.

The report, which was conducted by Guidepost Solutions, stated that over the past two decades, “many reform efforts were met with resistance, typically due to concerns over incurring legal liability.” The Times did not independently verify the contents of the report.

It revealed that an executive committee staff member working for Mr. Boto had, for more than 10 years, maintained a detailed list of ministers accused of abuse. But no one “took any action to ensure that the accused ministers were no longer in positions of power at SBC churches,” the report stated. “The most recent list prepared by the EC staff member contained the names of 703 abusers, with 409 believed to be SBC-affiliated at some point in time.”

The report described revelations in recent years that senior leaders had “protected or even supported abusers.” The leaders included three former presidents of the denomination, Steve Gaines, Jack Graham and Paige Patterson, as well as a former vice presidentand Mr. Boto, a former executive committee interim president and general counsel.

During the course of Guidepost’s investigation, the report said, a pastor and his wife came forward to allege that Johnny Hunt, who was president of the denomination from 2008 to 2010, had sexually assaulted the wife shortly after his presidency ended. The report described the pastor and his wife as “credible,” and said that parts of their account were corroborated by four other credible witnesses.

Mr. Hunt denied the accusations to Guidepost, but The Houston Chronicle reported that he resigned this weekend from the denomination’s North American Mission Board. Mr. Hunt did not respond immediately to a request for comment.

When the denomination’s public policy arm, the Ethics and Religious Liberty Commission, compiled a report on sexual abuse, leaders of the executive committee and outside counsel “suggested changes to the report to avoid potential liability, including removing the word ‘crisis’ when referring to sexual abuse, ”the report stated.

A proposal in 2007 to keep track of accused sex offenders was rejected in 2008 on the grounds it interfered with individual church autonomy, the report said, even though an outside counsel had suggested it could be done in keeping with denominational structure.

The report comes weeks before the convention’s annual meeting and is likely to send shock waves through its nearly 15 million members.

“This report is horrifying. The number of lives decimated by those who claim to follow Jesus is almost beyond comprehension, ”said Boz Tchividjian, an attorney who represents abuse survivors across the country. “Perhaps it’s time for the SBC to be no more.”

Leaders of the executive committee said in a statement that they would hold a meeting on Tuesday to discuss the report.

“To the members of the survivor community, we are grieved by the findings of this investigation,” said Rolland Slade, the group’s chairman, and Willie McLaurin, the group’s interim president, in the statement. “This is the beginning of a season of listening, lamenting, and learning how to address sexual abuse in the Southern Baptist Convention.”

The report recommended actions for future reforms. Those steps included the creation of an offender information system “to alert the community to known offenders” that could be made available to churches on “a voluntary basis,” and the creation of a self-certification program about abuse prevention for churches and other Baptist entities, which would also be voluntary.

The report also recommended that the Southern Baptists eventually create a new administrative group that would oversee “comprehensive long-term reforms concerning sexual abuse and related misconduct,” and that church entities should restrict the use of nondisclosure agreements and civil settlements that demand confidentiality unless requested by the survivor. It also suggested that the committee that currently handles abuse allegations improve its procedures to become more transparent.