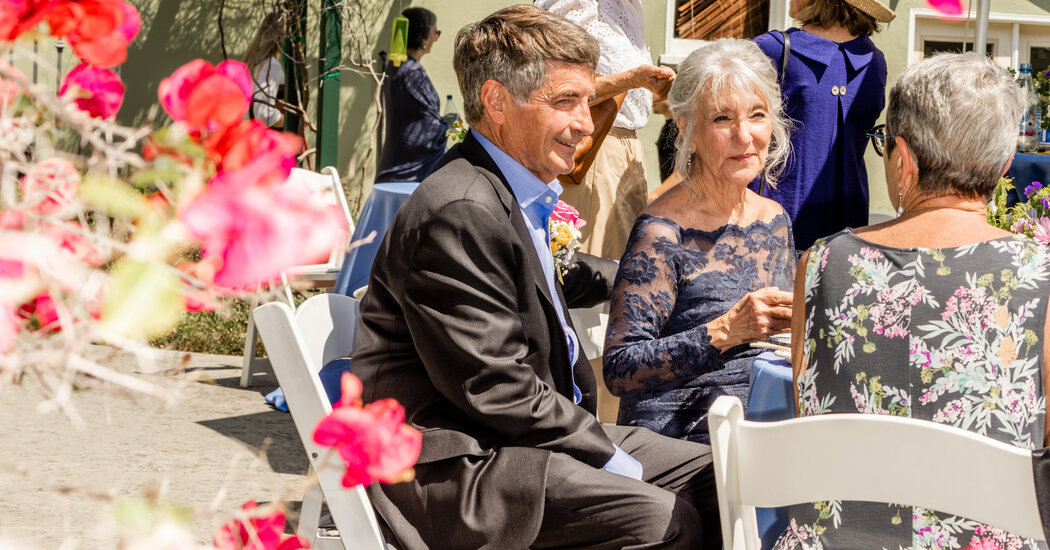 Douglas Alan Lockwood can pinpoint the exact moment something shifted in his perception of Linda Marie Cadranel Murphy. It was July 2020 and, speaking of the times, they were in a Zoom meeting.

Ms. Murphy, 74, was describing a man with whom she had gone on a series of walks. He only spoke about himself and never asked questions about her, she said.

She and Mr. Lockwood, 72, had logged into Zoom that day to meet with fellow members of a support group for navigating one of life’s most painful losses: that of a longtime spouse.

In the time since the support group first convened, Ms. Murphy and Mr. Lockwood had come to see each other as trusted confidants. After she recounted her experience on those walks, Mr. Lockwood affirmed her decision not to see the man again. “How dare he?” he recalled saying, and then, “You go, girl.”

“Of course,” Mr. Lockwood added, “I expressed that I was enlightened on what is probably pretty normal male behavior.”

But here more mention of the man, for Mr. Lockwood, was a revelation. By talking about him, Ms. Murphy was signaling to the group that she was open to meeting someone new. Though she was, companionship was about all Ms. Murphy thought she could handle it at the time.

Before her husband died, he told Ms. Murphy that his death should not stop her from enjoying life. “The fact that I knew he wanted me to be happy without him was a gift,” she said. Mr. Lockwood’s wife expressed similar sentiments to him before she died, he said.

Mr. Lockwood and Ms. Murphy first met months earlier, at an in-person meeting of their support group organized by Hospice of Santa Cruz County, in September 2019. She was living in Santa Cruz, Calif., And he in nearby Ben Lomond, Calif. When the official program ended after six sessions, its members continued to convene at monthly potluck dinners, which became virtual meetings after the pandemic set in.

A mother of two children in their 40s and a grandmother of four, Ms. Murphy grew up in Los Angeles. She graduated from the University of California, Berkeley, and has a master’s degree in English from Sonoma State University, where she also received a teaching credential. Now retired, Ms. Murphy worked as a drama teacher at Branciforte Middle School in Santa Cruz for 37 years.

Mr. Lockwood has four children, ages 35 to 47, and three grandchildren. A retired environmental sustainability consultant, he is originally from Pasadena, Calif., And graduated from the University of California, Santa Barbara.

By the time Mr. Lockwood learned that Ms. Murphy was open to new companions, he knew he wanted to have a committed relationship and get married again, he said. Certain qualities Ms. Murphy had displayed over the months they had been meeting made her seem like someone with whom he could do that.

“I thought she was smart, funny, sensitive, attractive and that we had a lot in common,” Mr. Lockwood said.

Asking her to go on a walk would be a good first step, he thought. But he could not do so right away.

In August 2020, shortly after Ms. Murphy returned from visiting one of her children on Lopez Island off the coast of Washington State, the CZU Lightning Complex Fires ripped through the Santa Cruz Mountains. Not only was being outside hazardous, but Mr. Lockwood had to evacuate his home in the mountains. (It was not damaged and he returned a week later.)

After the fires were extinguished, Mr. Lockwood suggested they meet for a stroll that October. Though unsure of his intentions – the two had never interacted outside of their support group setting – Ms. Murphy agreed.

“I was intrigued and curious and thought, ‘Well, why not?'” She said.

Ahead of their outing, Mr. Lockwood got a haircut, took his dog Penny, a corgi and Cavalier King Charles spaniel mix, to the groomer and bought a new polo shirt and shorts.

They walked around Santa Cruz Harbor and along Seabright Beach, stopping for a bite along the way at Aldo’s Harbor Restaurant.

“I was so charmed by how easy it was to talk to Doug,” Ms. Murphy said.

After they parted ways, he called her later that night, and again the next day.

“There was just a lot of communication going on,” she said.

The outdoors seeming like the safest place to meet because of the pandemic, more walks followed, including along Twin Lakes State Beach in Santa Cruz and through Pogonip, a local park with a network of trails.

“There are times in your life when you meet someone and you can immediately sense a deep connection,” Mr. Lockwood said. “I got a strong sense of that with Linda.”

Not expecting to fall in love again, Ms. Murphy was surprised by both the depth of her emotions and the speed at which they were developing.

“Without your long-term partner, you become a whole person in a different way that’s authentically who you are,” Ms. Murphy said. “That part of me really connected with Doug and who he really is.”

Francie Newfield, Ms. Murphy’s closest friend of nearly 50 years, described her as someone who is usually very deliberate. But once Ms. Murphy started spending time with Mr. Lockwood, Ms. Newfield said, she quickly went from “I do not know what to make of it” to “I’m really crazy about this guy.”

“There was a giddiness to her,” Ms. Newfield added. “If I felt a good friend was making a rash decision, I would counsel them; that was not necessary here. ”

Their first kiss came weeks after their first walk in October: Ms. Murphy kissed Mr. Lockwood on the cheek, but only after a friend advised her about Covid safety.

The following month, in November 2020, they went away for four days to Gualala, an unincorporated area in Mendocino County, California, on the coast. They stayed at Mar Vista Farm + Cottages, where they cooked meals using vegetables grown on the property and eggs from its brood of hens.

After that trip, both told their children that they were seeing someone new. Ms. Murphy said hers were immediately happy at the news. But some of Mr. Lockwood’s children had reservations at first, he said.

“They were concerned that the family was already in trauma, and now a new person is being introduced into the mix,” he said, adding that, in time, they warmed up to his relationship.

Despite how fast Ms. Murphy fell for Mr. Lockwood, she remained hesitant to remarry. But he was resolute in his desire for a new spouse, telling her, “Marriage is what I know and what I want.” His conviction ultimately convinced her to embrace the idea.

“Here was a man so committed to it, that I bought into it,” Ms. Murphy said.

Mr. Lockwood proposed in December 2020, spontaneously asking her to marry him while the two were at her house one afternoon. Wedding planning did not begin until a year later, after Ms. Murphy had a knee replaced in November 2021.

Following the procedure, Mr. Lockwood stayed with Ms. Murphy “to take care of me, and after that, he just stayed,” she said. (He still owns the home in Ben Lomond, which is 11 miles away.)

On April 23, the two were married before roughly 55 guests in the backyard of their Santa Cruz home by Dave Parker, Mr. Lockwood’s brother-in-law and a Universal Life minister. Ms. Newfield served as Ms. Murphy’s best woman and Alexa Horne, Mr. Lockwood’s close friend, as his.

In his remarks, Mr. Parker recited lines from “Winnie-the-Pooh” chosen by the couple: “I love you simply because you’re. Any day spent with you is my favorite day. ”

He also asked their guests, “Do we, the family and friends of Linda and Doug, agree to love and support them in their lives as a married couple?” They did, acknowledging the answer with claps and cheers.

“Grief cracks you open,” the groom said. “A lot of defenses and barriers fall away, and there you are.”

Where The backyard of the couple’s home in Santa Cruz, Calif.

The Attire The bride wore a deep blue lace gown and carried a bouquet containing a locket with a photo of her parents. The groom wore a dark gray suit. His dog, Penny, who also attended the ceremony, wore flowers on her collar.

Open House After exchanging vows, the couple held a reception attended by an additional 110 guests, whose arrival times were staggered throughout the afternoon. Jerry Pike, a neighbor, and Rob Bird-Robinson played music. For dessert, two carrot cakes from the Buttery, a Santa Cruz bakery, were served. One was decorated to say “Doug and Linda Surrounded by Love” and the other read “Happy Day.”