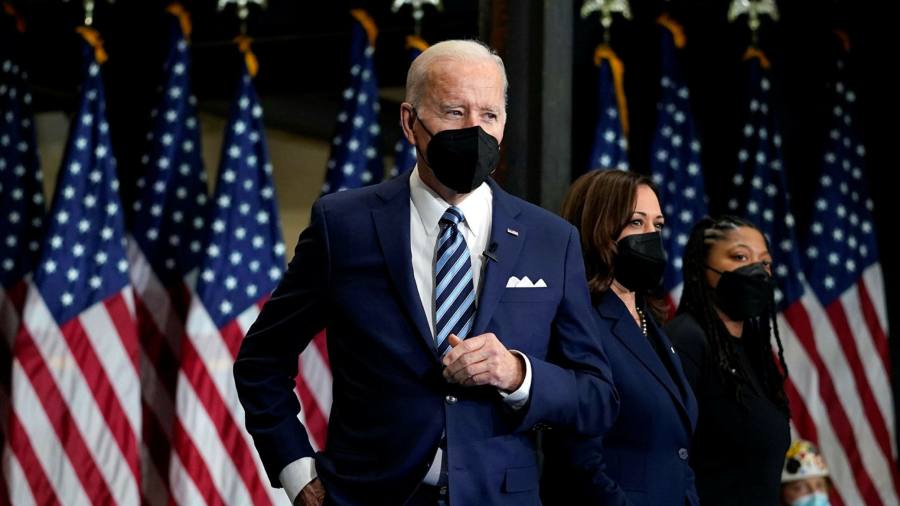 Earlier this week, Heather Boushey and other members of US President Joe Biden’s economic team warned that the Omicron variant might have temporarily depressed employment, and therefore the January jobs report should be taken with a pinch of salt.

But when the data landed on Friday morning, with payrolls surging above expectations in addition to large revisions to previous months, it served both as a sign of the resilience of the recovery and a vindication of Biden’s economic record.

“This is an emotional turning point. . . that tells us a lot about where we are, ”said Boushey, a member of the White House council of economic advisers. “The strength of the growth that we’ve seen, the strength of the recovery, the strength of wage gains – all of that speaks to the economy moving forward. We just needed to get it over that hump of the pandemic. ”

Biden has been forced on the defensive for months over his economic policies as supply-chain disruptions and high inflation have clouded the outlook and opened the door to increasingly vocal attacks from Republicans.

When job growth appeared to slow as the Omicron variant began spreading in December, it further damaged the president. According to an NBC poll last month, 38 percent of Americans approved of Biden’s handling of the economy, while 60 percent disapproved – contributing to a generally bleak assessment of his first year in office.

But evidence that the US economy plowed through the surging infections across the country this winter without much damage to the labor market could help undercut Biden’s critics and offer new ammunition for Democrats heading into the midterm elections.

Austan Goolsbee, a professor of economics at the University of Chicago and a former economic aide to Barack Obama, said there could finally be “light at the end of the tunnel”, and people’s perceptions of the economy could shift.

“Maybe we now say we can put this horrible mess behind us. If Omicron did not lead to the kind of job loss that previous waves created, then maybe it is conceivable that by the summer we could be back to something like normal, ”he said.

Big data revisions – and misses compared to economists’ expectations – have become more commonplace during the pandemic, complicating the political messaging around jobs reports.

If Omicron did not lead to the kind of job loss that previous waves created, then maybe it is conceivable that by the summer we could be back to something like normal

Republicans who had previously slammed Biden and the Democrats for the December slowdown in jobs creation were left with fewer arguments this time around. Kevin Brady, a senior Texas Republican in the House of Representatives, acknowledged that Americans were “finally coming off the sidelines,” but only because government support from the $ 1.9tn stimulus bill – including unemployment benefits and child tax credit payments – had faded.

He added that there was no need for additional government backing for the economy, including Biden’s $ 1.75tn Build Back Better climate and social spending plan, which in any case is stalled in Congress.

Democrats who championed Biden’s economic plans drew the opposite conclusions, saying that the January jobs report showed that the hefty spending had helped generate exactly the kind of rapid bounceback – or “high pressure” economy – they envisioned.

They said that not only did the economy create 6.6m jobs last year, but employment and wage gains are also going to lower and middle-income Americans.

“We Democrats learned the lesson of what was a less-than-robust approach to building us out of the Great Recession in 2008. That’s why we pushed so hard to do the strong stimulus that we did, and it’s working,” Tina Smith, a Democratic senator from Minnesota, told the FT. “And it’s not only working, it’s working across the board.”

The biggest political vulnerability for Biden on the economy has been high inflation, which has meant many US households aren’t feeling the benefits of the strong recovery.

“If the price of oil is $ 90 per barrel, it’s not going to be like 1984 or even like 1999 where people look out and say, ‘This is what a boom looks like,'” Goolsbee said. “There [are] also still substantial downsides: large groups have a legitimate beef, they do not feel like it’s going great. So I do not think anybody should get overconfident. ”

The White House has taken some of its own steps to bring down prices, including trying to ease supply-chain bottlenecks at ports and holding talks with energy-producing countries to boost supply. But administration officials and Democratic lawmakers have also grown more comfortable with the idea of ​​the Federal Reserve tightening monetary policy to ease pricing pressures.

Goolsbee said the strong jobs report could give the central bank more leeway to engineer a “soft landing” without triggering a recession. “It feels like there’s a little bit of wiggle room that the Fed can raise rates and the economy is strong enough to handle moving back to normal or starting a move back to normal,” he said.

Lauren Melodia, deputy director of macroeconomic analysis at the Roosevelt Institute, a progressive think-tank, said that because of the big swings in labor market data during the pandemic, it was “important to scrutinize the numbers and be patient and not expect that we ‘re going to have all of the answers in real time ”.

But she believed the lesson of this week’s job report – and what it said about the strength of the Biden recovery – would endure.

“Because of the fiscal policies and public health measures put in place last year, we have seen American workers and businesses weather the storm of the recent variant and its disruptions,” she said.