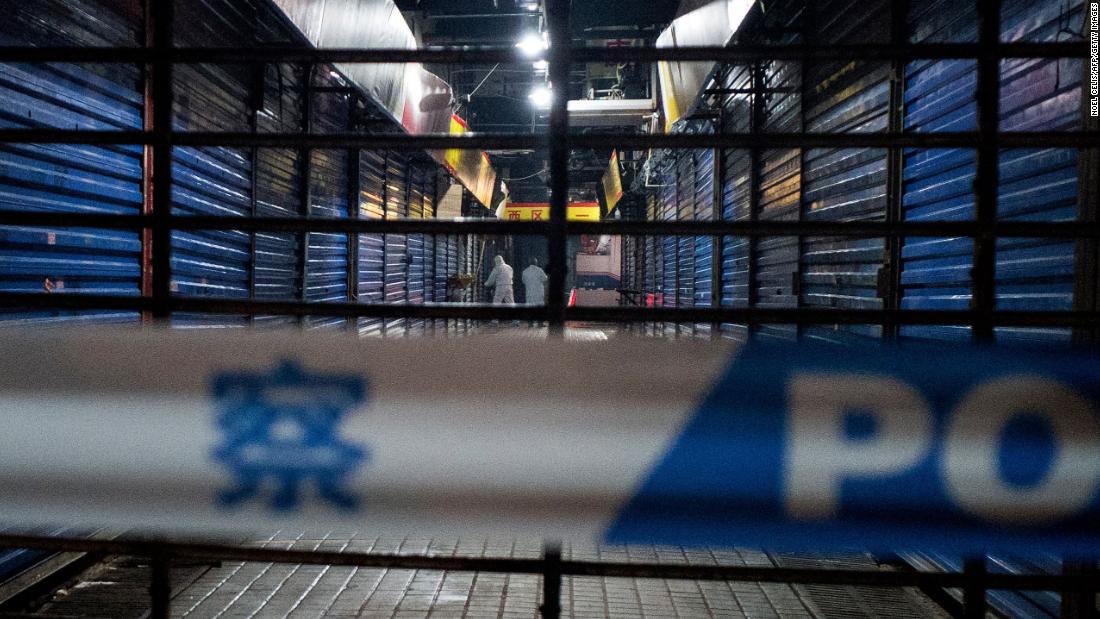 One of the studies – neither of which has been peer-reviewed or published in a professional journal – used spatial analysis to show that the earliest known Covid-19 cases, diagnosed in December 2019, were centered on the market. The researchers also report that environmental samples that tested positive for the virus, SARS-CoV-2, were strongly associated with live-animal vendors.
The other study says the two major viral lineages were the result of at least two events in which the virus crossed species into humans. The first transmission most likely happened in late November or early December 2019, the researchers say, and the other lineage was probably introduced within weeks of the first event.
Experts have roundly condemned the theory of a laboratory origin for the virus, saying that there is no proof of such origins or of a leak. Many of the researchers behind the new studies were also participants in a review published last summer that said the pandemic almost certainly originated with an animal, probably at a wildlife market.

The new studies take this area of ​​research “to a new level” and are the strongest evidence yet that the pandemic had animal-related (or zoonotic) origins, Michael Worobey, a professor and head of ecology and evolutionary biology at the University of Arizona told CNN. Worobey was lead author on the geographical study and co-author on the other paper.

He called the findings “game, set and match” for the theory that the pandemic originated in a lab. “It’s no longer something that makes sense to imagine that this started any other way.”

Worobey likened the pattern of the coronavirus’ initial spread to a firework, with the market at its center. The explosion started in late 2019, but the pattern had changed completely by January or February 2020, the hallmark of a virus “seeping into the local community.”

The study notes that “December 2019 Covid-19 cases were geographically distributed unexpectedly near to, and centered on, the Huanan market, irrespective of whether or not they worked at, had visited or were knowingly linked to someone who had visited this market in late 2019. Furthermore, of those cases epidemiologically linked to the market, the overwhelming majority were specifically linked to the western section of the Huanan market, where most of the live-mammal vendors were located. “

When researchers tested surfaces at the market for the virus’ genetic material, there was one stall with the most positives, including in a cage where one researcher had previously seen mammals called raccoon dogs being kept.

The findings are “as close to having the virus in an animal as you can get,” Robert Garry, a professor of microbiology and immunology at Tulane Medical School, told CNN.

Garry was co-author on the study that found at least two zoonotic or animal-transmission events. It notes that the pandemic began with two major viral lineages, called A and B, although it says there were probably even more forms of the virus “that failed to establish in humans.” Lineage B is the more common of the two and the only one that had previously been found at the market, but the study says lineage A was also circulating around the area early in the outbreak.

The virus most likely started with at least two animal transmissions, with a raccoon dog or another mammal serving as the intermediate host before it spread to humans, the study says.

When considered along with reports of SARS-CoV-2 infection in animals like big cats, deer and hamsters, this shows that “this is a virus that just does not care what it replicates in,” Garry said.

Garry and Worobey say the studies show the urgent need to pay attention to situations in which animals and humans interact closely on a daily basis. “We need to do a better job of farming and regulating these wild animals,” Garry said, and “invest in infrastructure in places where viruses spill over.”

Worobey also said human surveillance is crucial to preventing future pandemics, adding that experts and officials should be better at detecting cases of respiratory disease with no clear cause, isolating patients and sequencing viruses. “This is not the last time this happens,” he said.