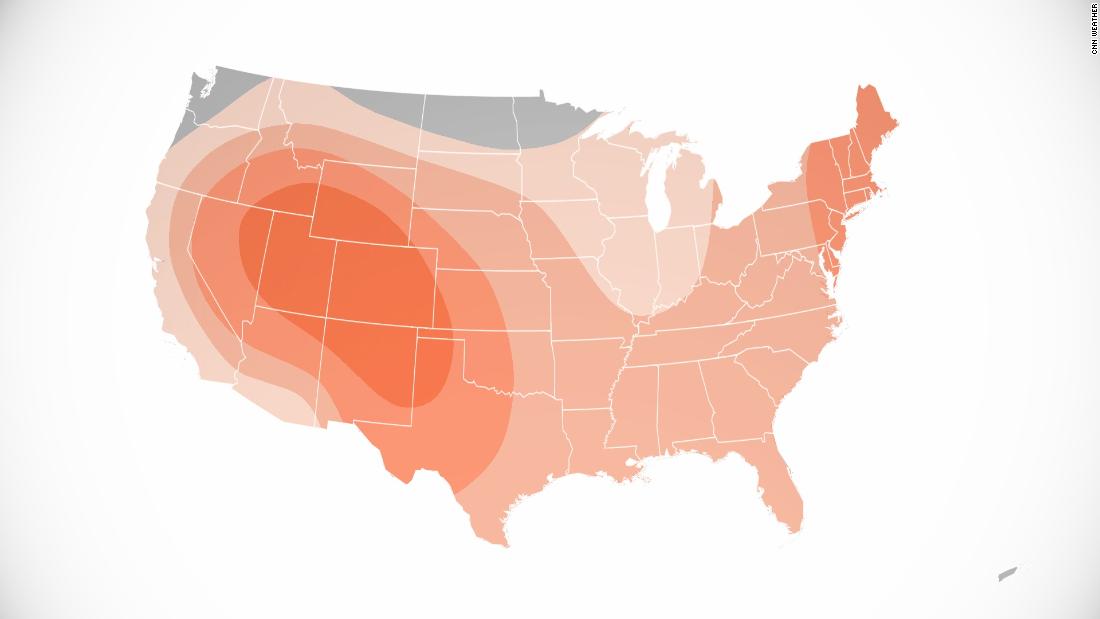 Nearly the entire contiguous US is expected to have above-normal temperatures this summer, which runs from June through August, according to Thursday’s Climate Prediction Center’s outlook. The combination of hotter weather and below-average rainfall is expected to fuel the megadrought that covers much of the West.

The chance for above-normal temperatures will continue to be an issue from the Inter-Mountain West to the Southern Plains, with an emphasis on the Desert Southwest. Many “above” readings are expected again from southern Colorado into west Texas and encompassing the entire state of New Mexico.

Unfortunately, the outlook for precipitation remains low across the west as well, with the lowest chances of rainfall from central Wyoming into northern Texas. The only area with above-average precipitation probabilities is found along the Gulf coastal region and Florida.

Just when you think the drought can not get any worse, it does. Thursday’s release of the US Drought Monitor reports our drought intensifying and expanding in the past week.

“Drought or abnormal dryness expanded or intensified where it continued to dry, especially in the Southwest,” according to the Drought Monitor. “Little to no precipitation occurred across the southern states in the West region, from California to New Mexico,” the drought summary said.

In California, exceptional drought, the highest designation of conditions, was introduced this week for the first time since the first week of January. While exceptional drought covered up to 50% of the state at times last year, an abnormally wet December erased the worst drought in the state. But a record dry start to the year through April has once again left California facing worsening drought as the dry season sets in.

NOAA’s 90-day forecast shows the greatest concern as the mercury is expected to soar and 95% of the US expects above-average summer temperatures.

With the West in the grip of a megadrought that is creeping eastward, the above average temperatures provide no relief. Not only will the Inter-Mountain West to the Western Plains see relenting heat, but the New England region in the northeast will also be sweltering.

The 90-day precipitation outlook calls for below normal chances of rain extending from the Pacific Northwest, Northern Plains and again into the Southern Plains.

Some relief is possible if the seasonal monsoon rains can creep into the forecast in the desert Southwest. Typically, the summer monsoon rains reach their peak July and into August. Above-average rainfall chances are also in the cards for the northeast down through the southeastern states. The current La Nina pattern elevates the possibility of tropical storm and hurricane development – therefore a greater chance of rain in this region.

The wildfires rage on and power cuts are likely

With higher than average temperature expected to continue and extremely limited soil moisture, the wildfire threat is sure to continue.

Exceptional drought expanded significantly in New Mexico and West Texas, including over the Hermits Peak / Calf Canyon fire footprint in northern New Mexico that has burned more than 300,000 acres and is the largest fire in modern state history, according to the Drought Monitor.

With a forecast of extreme temperatures and a drought putting stress on the ability to produce hydro-electric power in many areas, the need for power cuts may be coming to a town near you.

A shortfall is when there is not enough power being generated to meet demand.

Forced power outages, also known as rolling blackouts, are initiated during these situations – which is what millions of Americans run the risk of seeing this summer to prevent long term damage to the grid.

CNN’s Brandon Miller and Monica Garrett contributed to this report.