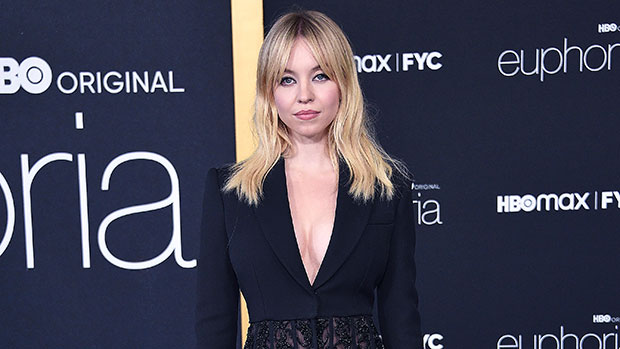 Sydney Sweeney is having her moment. And the 24-year-old actress was the center of attention while attending a For Your Consideration event for her series Euphoria on Wednesday, Apr. 20 at The Academy Museum in Los Angeles.

Sydney turned heads as she took the red carpet wearing a plunging Alexander McQueen suit which put her stunning figure at the forefront. She opted to wear her jacket without a shirt underneath for a bit of cleavage. The jacket, which featured strong shoulders and wide lapels, continued to highlight Syd’s sexy side via a panel of intricate lace across the abs. Keeping things streamlined on the bottom, the suit featured slim trousers with a bit of a flair towards the bottom.

For beauty, the Washington-born actress went with smooth, face-framing waves through her bright blonde tresses. She played up her blue eyes with some bold, graphic eyeliner while blush and peachy lipstick made sure she was ready for the spotlight.

It was a busy week for The White Lotus star, who spend last weekend rocking out at Coachella Music & Arts Festival in Indio, California. During the festival, she looked ultra-chic while romping around the Polo Fields in a little white eyelet number and cowboy boots.

Sydney opened up about playing Euphoria’s troubled character Cassie in a new interview with Vogue, out Apr., 21. She said, “As an actress, it’s a dream role. I’m getting to go deep and to creatively fulfilling places. ”

Sydney went on to gush about the made behind the show, Sam Levinson. “He is such an incredible creator because it allows these characters to go places that people are scared to [approach], but he is not. Having the opportunity to bring this to life and affect such a huge audience is incredible. ”