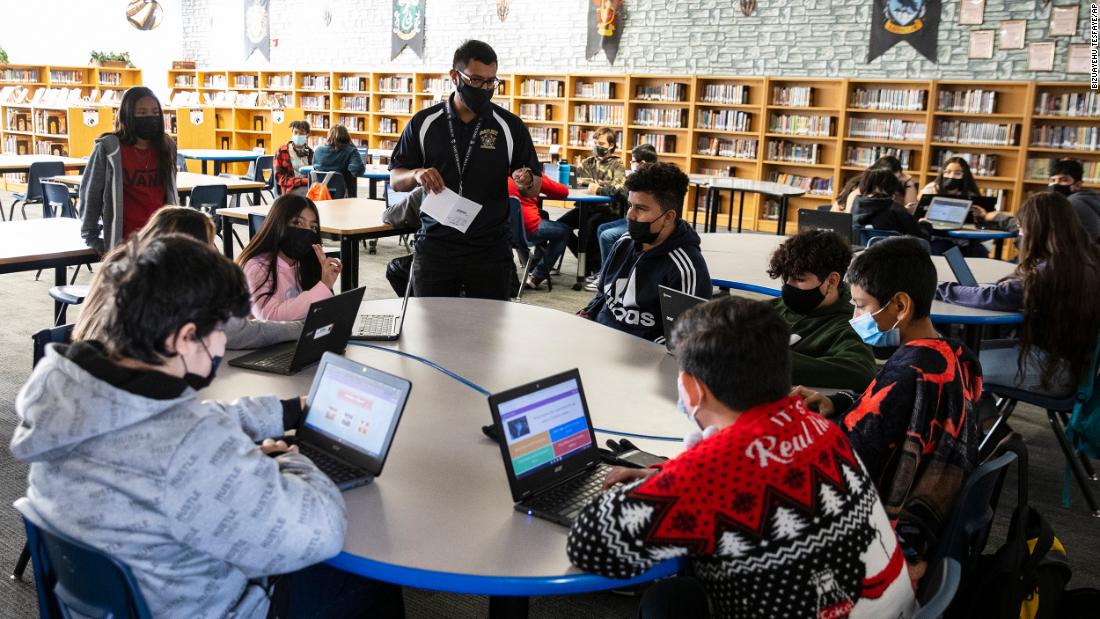 “As more and more teachers retire, we need to have others feel that role and right now, the numbers are not looking good for us,” said Heather Sparks, director of Teacher Education at Oklahoma City University. “It’s heartbreaking to watch.”

While some say it’s too early to know the specific impacts of the pandemic, Lynn Gangone, president and CEO of the American Association of Colleges for Teacher Education (AACTE) told CNN the numbers already show Covid-19 further dissuaded Americans from going into teaching. In fall 2020 and 2021, about 20% of institutions surveyed by AACTE reported the pandemic resulted in a decline of new undergraduate enrollment of at least 11%. Roughly 13% of institutions reported “significant” declines in the number of new graduate students. Regional state colleges and smaller private institutions – often found in rural communities – have seen the steepest declines.

“I do not know how bad it’s going to have to get before we realize as a country that if we do not invest in education … we will not have anyone in the classrooms to teach our children,” Gangone said.

Priscilla, a northern California student teacher who did not want to use her full name for fear of the impact it may have on her career, has wanted to be a teacher since she was a teenager – but as she prepares for the test to get her credentials this spring, she worries about how long she’ll be able to cope with today’s demands of being in a classroom.

“There’s just so much more that’s being asked of teachers now,” she said. “It’s just like, ‘am I going to burn out in my first year?’ I hope not. ”

Covid-19 compounded existing struggles and added new hurdles for aspiring educators. Some missed in-person classroom experiences that serve as a valuable tool to prepare them for their student-teaching placements and the workforce. Others are diving into their first classroom experience by trying to figure out how to keep their students engaged after many became accustomed to tuning out after hours on electronic screens. Priscilla said much of her first year as a student teacher has involved reviewing past material to get her class up to speed. All while worrying about contracting Covid-19.

“At this point, it’s more of when I’m going to catch it,” Priscilla said. “I’m currently substituting for my (supervising) teacher because she and her family caught Covid.”

But even before the pandemic, the teaching profession struggled to attract new people: It promised high stress and low pay, and despite the scores of stories highlighting the often life-changing impacts teachers can have on their students, educators in the US have long felt unappreciated and disregarded.

“I think the perception of teaching is that there is little respect and little pay for the amount of work that has to be done,” Priscilla said, adding that while her family values ​​education, they attempted to dissuade her from pursuing teaching. “It’s not as prestigious as something else, like maybe a doctor, or a nurse.”

Research from the National Education Association found the average classroom teacher salary during the 2020-2021 school year was just over $ 65,000. Some of the lowest paying states – offering an average salary of less than $ 50,000 – include Florida, Mississippi and South Dakota, according to the research. California, Massachusetts and New York, the highest paying states, offered an average of more than $ 85,000.
The little compensation remains among the biggest challenges in recruiting future teachers, especially when combined with the costs of acquiring the necessary credentials added on to student loans.

Sabreena Shaller, a 22-year-old graduate from Millersville University and student state president for the Pennsylvania State Education Association, said her early education and special education degree came with hefty price tags, from the costs of standardized tests to transportation during her field experience – which included frequent Uber rides to the classrooms she was placed in during her freshman year before she decided to pay for a spot for her car on campus. Other classmates, Shaller said, struggled to find transportation means.

“We do not just need those economically privileged students as our teachers, we need the teachers who also had a struggle growing up financially, because those are the teachers that our students also need,” Shaller said. “But we gatekeep our education programs for those people who can afford to be a teacher.”

And it’s not just socioeconomic diversity the field is in desperate need of, experts say. In 2017-18, nearly 80% of public school teachers were White, 9% were Hispanic, 7% were Black and 2% Asian, according to data from the National Center for Education Statistics.
“Many students of color do not see themselves in the current teachers,” said AACTE’s Gangone.
And a recent legislative push in states across the US to mandate what can – and can not – be taught in classrooms is not helping, Gangone said. A new study found more than 17.7 million public school students in the US have had their learning restricted when it comes to teaching concepts related to race, racism and gender.
“The financial cost, but also the emotional cost of having to constantly battle and fight for our youth, for our children can be exhausting,” said Sharif El-Mekki, CEO of the Center for Black Educator Development.
The problem is nothing new, El-Mekki said, and even prior to debates flaring up around Critical Race Theory (CRT), educators of color long felt policed ​​about what they could teach, which was a deterrent for aspiring teachers.

It’s important that “educator prep programs understand the whole package of what it costs and make sure they’re providing support, but then also that districts provide ecosystems that are safe, supportive and sustainable,” El-Mekki added.

Some college leaders say if there’s a silver lining, it may be that the pandemic has made apparent that it’s time for a drastic shift in how America’s teachers work – and how to draw more in.
Arizona State University’s Mary Lou Fulton Teachers College has seen enrollment in teacher prep programs increase every fall since 2017, according to data provided by the college. University officials partly attribute the rise to a state-funded scholarship that allows young educators to finish their program debt-free if they commit to teaching in schools across the state for a certain amount of time. (Other universities, like the University of Wisconsin-Madison’s program, have similar offers of financial support if students pledge to teach in the state for three to four years.)
Many feel the enrollment bump has also largely been because of a new approach the university is taking to reshaping the teacher workforce – an approach whose vision is a team of experts working to educate students rather than one teacher per classroom.
In that team, as the university envisions it, teachers who work with students specialize in different areas and approaches – for example, one may be a certified special educator while another specializes in mathematics – and meet regularly to plan lessons and discuss changes. Where that team lacks expertise, additional full-time, part-time or volunteer educators can step in to cover certain subjects. It’s a long way away from where the US is today, but industry leaders say it’s what education should look like.

“We can not keep putting people in that situation,” Carole Basile, dean of Arizona State’s teacher college, said. “They’re going to leave.” New approaches to education programs can help draw more educators in, retain them, but also facilitate progress for instructional staff already in the workforce, Basile said.

To combat a dangerous teacher and substitute shortage, some states recently opted for solutions like reducing requirements needed to lead a classroom, which industry leaders say is a band-aid solution and not a long-term answer to recruit qualified people to schools.
The problem, education leaders say, is not that a lack of people who could become teachers, but rather not enough people choosing it as a profession.
Key in recruiting and retaining more people will be legislative support, many said. The AACTE recently expressed support for the Educators for America Act, which was introduced in the Senate last year and calls for an annual $ 500 million to support educator prep programs, among other provisions to address early outreach and preparation.

Financial support, community support, mentorships and apprenticeships will be critical in drawing in more educators of color too and in turn, inspiring more young students to enter the field, El-Mekki said.

“One of the things that students benefit from (diverse educators) is this idea of ​​seeing themselves not only leading classrooms, but also in the curriculum,” El-Mekki added.

Those dedicated to joining the field say that mission, to better young people, is what keeps them going. Looking to the future, there is worry – but there’s excitement too.

“There is a lot of crazy news right now with Covid, and even with recent school shootings,” Priscilla said.

But she remains determined.