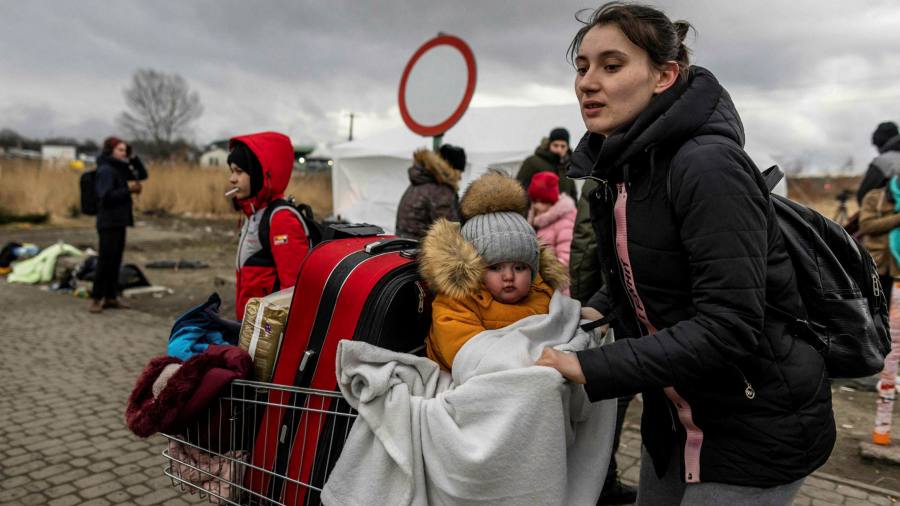 On Ukraine’s border with Poland this week, trying to find some shelter from the biting wind, Lena was coming to terms with the fact that – for the second time in her life – she has been displaced by war.

After Russian-backed separatists and Moscow stoked conflict in eastern Ukraine in 2014, Lena fled her home in Luhansk and moved to Kyiv, hoping for a safer life in the capital. But as Russian missiles began to rain down on her country last week, she found herself fleeing once more.

“We had bought an apartment in Kyiv, but now we had to leave again,” she said, cradling her pet dog beneath her jacket. “I do not believe what is happening. I just do not believe it. ”

Since Russian tanks rolled into Ukraine last week, hundreds of thousands have made a similar journey. The country’s western neighbors have all offered help. Poland, which has close linguistic and cultural ties with Ukraine and is already home to more than 1mn of its citizens, looks likely to be one of the main destinations.

Poland’s conservative-nationalist government vehemently opposed EU efforts to enforce quotas for asylum seekers during the 2015 migration crisis. But this time, officials have said they are preparing to take as many as 1mn Ukrainians. Poland’s border force said on Monday that 327,000 people had entered the country since the start of the war.

On Tuesday the UN High Commissioner for Refugees said the conflict looks set to create “Europe’s largest refugee crisis this century” and that more than 660,000 have fled the fighting over the past six days.

The exodus has blocked Ukraine’s roads and caused chaos at crossings such as Medyka, where the queue of cars stretches tens of kilometers from the border, stranding thousands for days in freezing conditions with dwindling supplies of food and water.

The tailbacks have also sparked emotional scenes on the Polish side of the fence. Many Ukrainians already living in the west have come to the border to wait as their loved ones inch closer to the checkpoint. On Monday, one family hugged with joy as they were reunited. A few meters away, another woman cried with desperation at the delays facing hers.

Bogdan, who had come from Berlin, said his wife Olga and their five-year-old daughter had driven from Kyiv to within 30km of the border on Friday evening. But nearly three days on, they were still 11km – or two days – away.

While she waited in the car, he said, Olga had wrapped herself and their daughter in all the clothes they had so she could turn off the engine to conserve fuel without freezing. On the other side of the border, Bogdan had been calling her every 20 minutes or so to stop her falling asleep and losing her place in the queue.

“She is worried, she is panicked, she has a little kid, and if she runs out of petrol, they will have to go more than 10km on foot, and it’s impossible with a small child and after five days when she has not slept, ”he said.

Among those crossing the border, there were also groups from countries such as Nigeria, Yemen and Tunisia, many of whom moved to Ukraine to study and then found themselves caught up in the conflict.

As the new arrivals waited for transport further west, or tried to obtain much-needed sim cards for phones, smaller groups of Ukrainian men in Poland were heading in the opposite direction.

Anatolii Kachorak, from Ivano-Frankivsk in Ukraine, said he was waiting for his mother, wife and two children, who had been stuck at the border for four days, to cross to safety – but that as soon as they arrived he would go to defend his country. “I will fight to the end,” he said. “I will go to the front line, to wherever things are hottest.”

Despite Poland’s resistance to asylum quotas in 2015-16, opinion polls suggest most are in favor of taking in Ukrainians. Polish social media is awash with offers of free transport and accommodation, as well as links to fundraising sites for refugees.

In Medyka, aid groups have set up makeshift tents to provide shelter and on Monday volunteers were processing and handing out a steady stream of donations of blankets, food and water.

“We can take Ukrainians in, there is no cultural difference between us,” said Slawomir, who had taken the day off work to ferry 2,000 meals from Krakow to Medyka. “There will be no problem. They are us – just on the other side of the border. ”

But alongside the welcome, there have also been traces of unease at how the conflict might develop. At one petrol station on the outskirts of Przemysl, some 30km from the border, all the pumps had run dry, despite signs warning customers to limit their purchases to 100l each.

“I think people panicked a bit,” said the cashier. “They started turning up with a couple of canisters each. It went quickly. I hope that was the peak. But Putin is completely unpredictable. He has lost it. “

And relief at reaching Poland is tempered with fear of the unknown for many of the refugees from Ukraine. “I really do not know what I will do now,” said Lena, as she waited for her sister, who already lives in Poland, to pick her up. “In our situation, the plans you make – they never come true.”