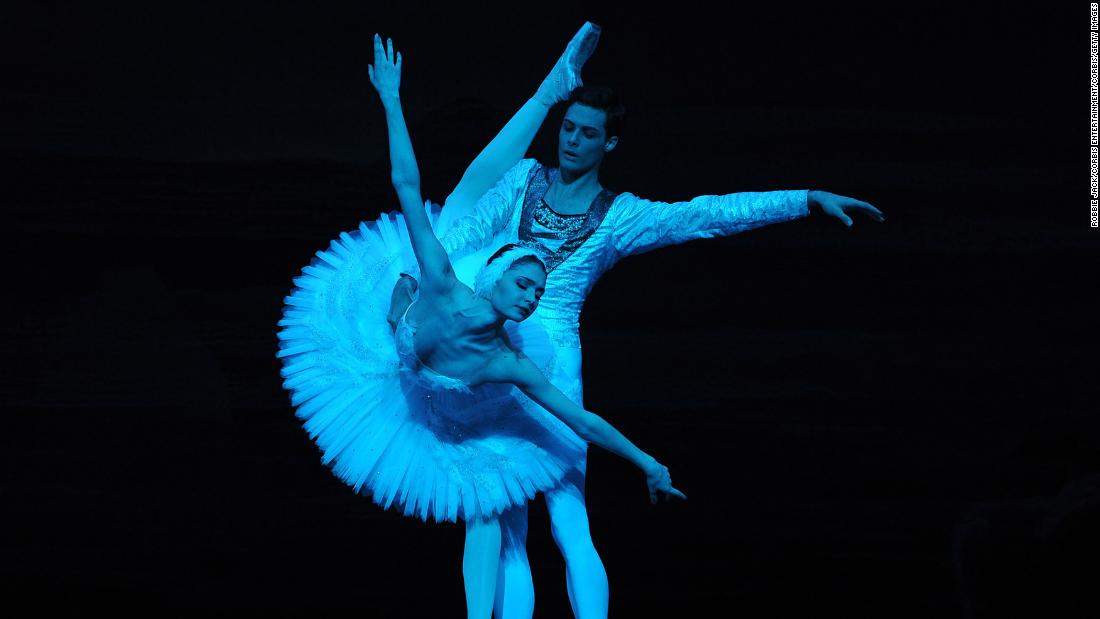 Stage curtains are closing, art exhibitions are being halted and performers are being replaced. Over the past week, major cultural players worldwide – including some within Russia – have reacted to the invasion of Ukraine by canceling shows and applying pressure to the country’s art institutions. So far, more than 500,000 refugees have fled Ukraine as the Kremlin continues its assault on the country’s most populated cities, including the capital, Kyiv.

While much of the focus has turned to sanctions meant to cripple Russia’s economy, the country’s cultural influence is also being curtailed. Russia will no longer be represented at major international events like the Venice Biennale and the televised music competition, Eurovision. Artists and performers, from Iggy Pop to Franz Ferdinand, are also canceling shows in the country, while those who have expressed support for President Vladmir Putin are being shunned. In Germany, the Russian chief conductor of the Munich Philharmonic, Valery Gergiev, was fired for his refusal to condemn the war or Putin, with whom he has close ties, according to a statement from Munich’s mayor Dieter Reiter.

Cultural institutions are also under growing pressure to cut ties with Russian oligarchs. British parliamentarian Chris Bryant has called on UK gallery group Tate to revoke the honorary member status of Russian billionaire and Putin associate Viktor Vekselberg, as reported by the Guardian, though a spokesperson for the Tate told CNN that he donated seven years earlier and “there is no ongoing connection, “adding that there are” no UK sanctions on any of Tate’s supporters. “
Ukraine’s Minister of Culture, Oleksandr Tkachenko, has joined a group of Ukrainian artists, gallery owners, actors, musicians and film directors in demanding stronger, sweeping cultural sanctions. They have signed a petition calling on international institutions to cancel cultural partnerships with the Russian Federation, sever relationships with Russian nationals sitting on advisory boards and ban Russian participation in major art events, including Art Basel and the Cannes Film Festival.

“The Russian Federation is a rogue state,” reads the petition. “Russian culture, when used as propaganda, is toxic! Do not be an accomplice!”

But some are cautioning against culturally isolating all Russians over the war. Raimundas Malašauskas, who was set to curate the Russian pavilion at April’s Venice Biennale, pulled out of the event, but said he does not want the art world to turn its back on Russian artists.

“I explicitly oppose the current assault and subjugation commanded by Russia. I also believe that people from Russia should not be bullied or cast away solely due to their country’s oppressive policies and actions,” he said in a statement on his website. “I want to avoid flat-falling divisions, and instead advocate for multi-leveled forms of solidarity where there are international forums for art and artists from Russia to express the freedom that they can not express at home.”

Below are some of the ways that artists, cultural organizations and institutions are reacting to the war in Ukraine.

Russia will be absent from the Venice Biennale

When Malašauskas and Russian artists Alexandra Sukhareva and Kirill Savchenkov resigned from participating in the Venice Biennale, they effectively canceled the Russian Federation’s representation at one of the biggest and most prestigious art gatherings in the world.

The Russian pavilion, designed by architect Alexey Shchusev, has been a permanent fixture in Venice Giardini since 1914, opening its doors every two years to showcase the work of some of the country’s most important contemporary artists.

In a statement, the Biennale expressed its “complete solidarity for this noble act of courage.” Savchenkov, who works in sculpture, installation and performance art, meanwhile wrote on Instagram that “there is no place for art when civilians are dying under the fire of missiles, when citizens of Ukraine are hiding in shelters and when Russian protesters are getting silenced. “
The Ukrainian pavilion is unlikely to open this year either, with an official statement on Instagram explaining that all work on the exhibition has ceased.

The Metropolitan Opera will not work with pro-Putin artists

A view of Lincoln Plaza with the Metropolitan Opera House in the center on April 06, 2021 in New York City. Credit: Roy Rochlin / Getty Images

The most famous opera house in the US, New York’s Metropolitan Opera, announced on Sunday that it will not work with Russian artists or organizations that support President Vladimir Putin until the country’s invasion of Ukraine ends.
“While we strongly believe in the warm friendship and cultural exchange that has long existed between the artists and artistic institutions of Russia and the United States, we can no longer engage with artists or institutions that support Putin or are supported by him – not until the invasion and killing has been stopped, order has been restored and restitutions have been made, “said Peter Gelb, general manager of the Metropolitan Opera, in a video message shared to Facebook.

This means that the Met will likely freeze its relationship with Moscow’s Bolshoi Theater, whose co-production of Wagner’s “Lohengrin” is currently planned for next year. Russian soprano Anna Netrebko, who was set to play the title role in Puccini’s “Turandot” at the Met later this spring, might also have been affected, though she has now pulled out of all scheduled performances, according to a statement from the Zurich Opera House, where she was scheduled to perform this month.

On Saturday, Netrebko wrote on social media that she is “opposed to this war,” but “not a political person.” The Zurich Opera House described her post as a “positive development,” but her inability to “distance herself further from Vladimir Putin” was incompatible with its own “decisive condemnation” of the Russian president’s actions.

People are seen by “The End – Venezia” (2009) by artist Ragnar Kjartansson at the GES-2 House of Culture in Bolotnaya Embankment. Credit: Stanislav Krasilnikov / TASS / Getty Images

Contemporary Icelandic artist Ragnar Kjartansson, who is known for performance works and video installations that reflect the human condition, has pulled his exhibition at Moscow’s new GEC-2 museum. Speaking to CNN via email, he cited the bravery of local Russian artists who have canceled their own shows in response to the war.

“I was following the (ir) example … which is way more dangerous than my cozy stand here in Iceland,” he said.

Kjartansson, who in 2009 became the youngest artist to represent Iceland at the Venice Biennale, has exhibited at Tate Modern in London and the Metropolitan Museum of Art in New York. He believes that artists, curators, collectors and institutions must “consider every move” in order to “stand by” Ukraine and stand “against Putin’s regime,” but called for artists themselves to be protected from boycotts.

“Boycott Russian collectors who do not publicly oppose Putin … not Russian artists, (except) those very few that support Putin,” he said. “Support Ukrainian artists with residencies in safe countries (and) exhibition platforms, and (do) the same for Russian artists from the opposition.”

Meanwhile, the Garage Museum of Contemporary Art in Moscow, founded by Russian oligarch Roman Abramovich and Russian American art collector Dasha Zhukova, announced that it has postponed all exhibitions until the invasion of Ukraine has ended. This includes halting shows that were already underway, including the work of German artist Anne Imhof and British artist Helen Marten. “We can not support the illusion of normality when such events are taking place,” reads a statement on the museum’s website.

Russia’s Manizha performs during the first semi-final of the 65th edition of the Eurovision Song Contest 2021, at the Ahoy convention center in Rotterdam, on May 18, 2021. Credit: KENZO TRIBOUILLARD / AFP / Getty Images

Less than a day after the European Broadcasting Union (EBU) said it would allow Russia to compete in the Eurovision Song Contest, a popular televised music competition, the organization reversed course. This May, no performers representing the country will be allowed to compete, the EBU confirmed in oa statement released on Friday.

“The decision reflects concern that, in light of the unprecedented crisis in Ukraine, the inclusion of a Russian entry in this year’s Contest would bring the competition into disrepute,” read the statement.

Russia had yet to select an act to perform on its behalf at the annual competition, which was watched by 183 million people last year.

UK distances itself from Russian ballet

Dancers Artem Ovcharenko and Anna Tikhomirova during a photo call ahead of performances by the Bolshoi Ballet at the Royal Opera House and the Royal Albert Hall. Credit: Ian West / PA Images / Getty Images

The UK’s Royal Opera House (ROH) has canceled a residency by Moscow’s famed Bolshoi Ballet company. The residency had been scheduled for this summer and was in the “final stages” of planning, according to a statement provided to CNN. A spokesperson for the ROH said: “Unfortunately, under the current circumstances, the season cannot now go ahead.”

The Bolshoi Ballet is one of the oldest ballet companies in the world, responsible for the first ever production of “Swan Lake,” among others. But its status as one of the country’s greatest cultural symbols is complicated by its entanglement with the Russian government.
The company’s former artistic director Alexei Ratmansky, who is now an artist-in residence at the American Ballet Theater, had been working on a new performance for his former company in Moscow when Russia invaded Ukraine. The Russian-born choreographer, who was raised in Kyiv, has since departed for New York with his entire creative team, according to the New York Times.

“I was absolutely torn between creation, love and desperation,” he told the Times of his decision to leave. Ratmansky’s new ballet was supposed to open March 30, but has been postponed indefinitely.

Performances by several other Russian ballet companies have also been affected, with shows by the Russian State Ballet of Siberia pulled in the English town of Northampton and a performance of Swan Lake by the Royal Moscow Ballet called off in Dublin, Ireland.

The Ukranian Film Academy has set up a public petition calling for the international boycott of Russian cinema, including showings on the international film circuit. The European Film Academy (EFA) has responded in support, saying it will exclude Russian entries from the European Film Awards.
“The European Film Academy remains a place to support and unite all filmmakers who share our belief in human dignity, freedom, democracy, equality, rule of law, and human rights,” the EFA said in a statement. “We acknowledge and appreciate those brave filmmakers in Russia who stand up against this war. But in view of a brutal and unjustified attack, we have to stand with our sisters and brothers in Ukraine whose lives are at risk.”

This story will be updated as developments happen.

Top image: The Bolshoi Ballet’s production of Swan Lake at The Royal Opera House on August 2, 2019 in London, England.