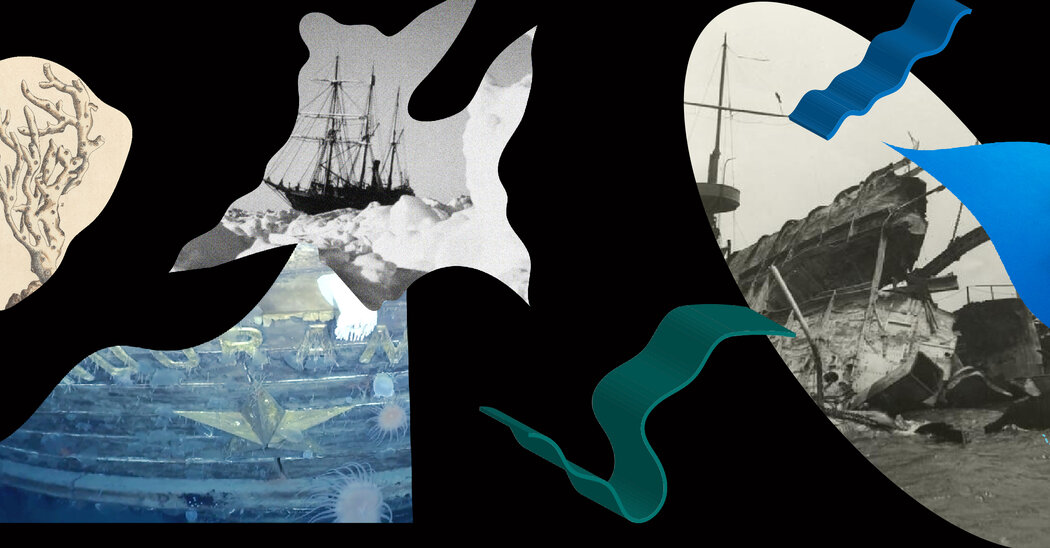 The discovery of the long-lost ship is a reminder of Shackleton’s deeds. It’s also a lesson in how technology is transforming our encounters with the past. The Endurance video is well-nigh Spielbergian, almost too wondrous, too exquisitely “art directed,” to be believed. Watching it, I could not help imagining what sights we might have beheld had a videographer been present at the opening of King Tutankhamen’s tomb, or if a drone camera were on hand when the jungle cover was stripped back to reveal the citadels of Machu Picchu . We live in a world where real-life “Indiana Jones” scenes may, at any moment, pop up on our social media feeds. But our relationship to these ruins and remnants has changed. These days, a sunken ship inspires not just awe but melancholy, moral unease, even dread.

The Hunt for the Wreck of the Endurance

Battling sea ice and freezing temperatures, a team of explorers and researchers found Ernest Shackleton’s ship that sank in the Antarctic in 1915.

The world today is smaller and less mysterious than in Shackleton’s time. Earth’s remotest realms have given up their secrets. To know the lay of the land in distant places once required literal boots on the ground – in Shackleton’s case, boots with nails punched through the soles, makeshift crampons for clambering over icy peaks. Now, thanks to our conquest of the most distant frontier, outer space, all-seeing satellites provide detailed maps of Antarctica’s ice-sheet moraines, available at the tap of a touch-screen. Journeys once undertaken only by the intrepid – to the depths of the Amazon or the heights of the Himalayas – are on the adventure-tourism circuit. What would Shackleton do of “Journey to Antarctica: The White Continent,” a cruise-ship vacation that offers encounters with icebergs and Emperor penguins amid the luxury of comfort – a quality of shipboard life and a philosophy of wellness designed to relax and rejuvenate body, mind and spirit ”?

Yet we know too much to romanticize the swashbuckling past. The history of exploration, after all, is inseparable from exploitation, the relentless drive of empires and private enterprise to claim territory and expropriate raw materials. The story is ongoing: As natural resources dwindle, global powers are racing to mine new frontiers of the jungles, the oceans, the Arctic north. Antarctica, the world’s last true wilderness, is protected by a treaty, signed by 42 countries, that imposed a ban on resource extraction from the continent, except for scientific research purposes. But nations are jockeying for access to Antarctic fishing, mining and oil reserves – including, most aggressively, China, which has expanded its presence on Antarctica during the pandemic and seems to be preparing for a potential expiration of the mining ban in 2048.

These days, a sunken ship inspires not just awe but melancholy, moral unease, even dread.

Even if the treaty remains in place, all is not well at the bottom of the planet. When Shackleton and his men voyaged to Antarctica, they entered a frozen world. Pictures of Endurance, taken by the expedition’s photographer, Frank Hurley, show the great ship iced into place, high and dry on the ocean’s wintry wastes. The images are iconic; they are also documents of a landscape that is vanishing quickly. The Great White South is thawing out. Once, the ice that covered the Weddell Sea made underwater exploration impractical, but in recent months the thickness of that ice has been recorded at some of the lowest levels ever. The discovery of Endurance was aided by climate change.