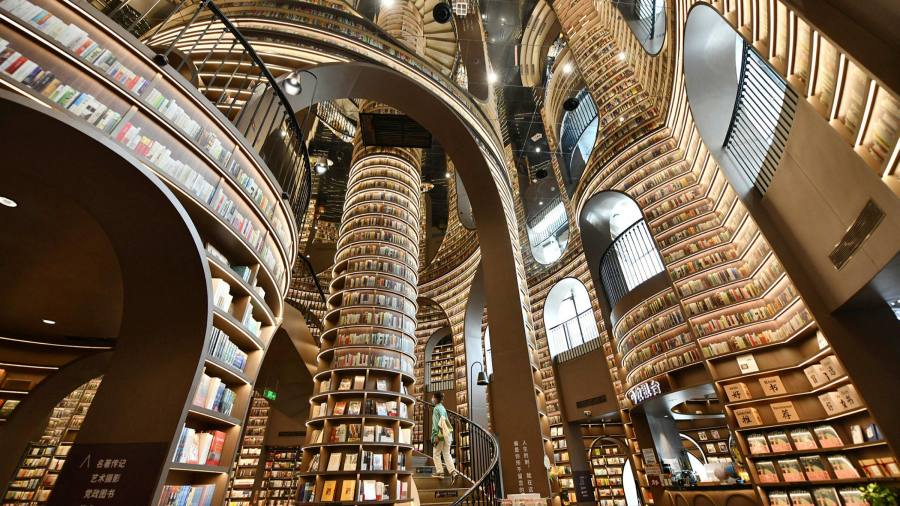 The hum returned to the halls of Olympia last week. After two years of pandemic-related cancellation, the London Book Fair was back “in person” at its usual venue in the west of the capital where thousands of publishers, agents, scouts – and the occasional author – from around the world gathered to negotiate , wheel, deal and chatter.

Spirits were high: after a record-breaking 2020, book sales in the major developed markets continued to rise strongly in 2021. Notable drivers of all that page-turning were adult and young adult fiction, the latter thanks in large part to BookTok and its vibrant community of readers posting recommendations on the short video app. All of which is quite something in an increasingly competitive attention economy.

Yet, as often with publishers, there is always something to fret about. If a few years back it was the march of digital devices, now production problems cloud the horizon. Exacerbated by paper and labor shortages, a shrinking pool of printers struggled to meet the increased demand last year, leading publishers to postpone new releases.

While consumers have been largely shielded from the price impact so far, Kristen McLean of NPD, which tracks US book sales, predicts that “supply-chain disruptions will come home to roost” in 2022.

And yet, such challenges notwithstanding, the chances are that we will continue as before to keep buying and reading books. Why this is so is explored in three new works about books that shed light on why the technology of bound pages remains so remarkably resilient. Whether for the cognitive and emotional rewards within their covers, our attachment to books as objects, or the potential for self-discovery afforded by browsing among them, each of the authors makes a case for the enduring appeal of this simple yet effective technology.

In How Words Get Good, Rebecca Lee tracks the journey of an idea “from the mind of the author to the eyes of the reader” (or the maw of a pulping machine, as the case may be). An editorial manager at Penguin Books, Lee offers a behind-the-scenes peek at the book-making process. She explains how “words” (anything from sentences to books) get “born” (written), “better” (edited) and are set “free” (published) – demystifying the role of copy-editors and cover designers, proofreaders and printers, translators and typographers.

Part of our reverence for books stems from their origins in religious texts – biblio and Bible share a Greek root – although the biggest destroyers of books are in fact publishers themselves. The industry’s economic model is not dissimilar to venture capital: a few bets yield a big pay-off when a book becomes a bestseller. For the rest, the portion of the print run that is unsold is returned by booksellers. Some of these are remaindered (sold at a discount); others are recycled (pulp to pulp). A few return to earth, in their own way: some 2.5mn pulped Mills & Boon romance novels were used to surface the M6 ​​motorway in the English Midlands.

Lee interviews colleagues and other publishing professionals for their insights. But How Words Get Good quotes copiously from secondary sources, many of which may be familiar to her readers, and at times at the expense of her otherwise vibrant prose. Still, the book is chock-full of the kind of anecdotes that are catnip for booklovers, from expensive errata – the 20,000 copies of “The Importance of Being Ernest” that came back from the printers, or a 1962 nuclear test in Sedan being accidentally relocated to Sudan and almost triggering a diplomatic incident – to the collective noun for a group of ghostwriters: the delightful “fright” of ghosts.

Whereas Lee focuses on the contents of books, in Portable Magic, Emma Smith makes a convincing case that it’s also their physical “bookhood” that enchants us. The form of a book primes readers for what to expect inside – whether it’s surrounding paratext signaling a classic or the saucy cover of a “thick bonkbuster” suggesting a “pleasurable wodge of leisure time”.

Smith, a professor at Oxford and the author of the well-received This is Shakespeare, takes her title from Stephen King, who holds books to be “a uniquely portable magic”. While that magic can be a force for good, Smith also considers books’ dark arts, from the tension between historical accuracy versus the potential to incite hate crimes in continuing to publish My fight to the disturbing (and thankfully rare) use of human skin for bookbinding.

‘Library sounds’ are some of the most searched-for ‘intoxicating sleep sounds’ available online – a heady combination of ‘page-turning, whispering, writing’ and the crinkling of dust jackets

She challenges the origin myth that print began in the 15th century with the Gutenberg Bible, which underplays its Islamic and east Asian predecessors. It’s not that the printing press created a supply of books that encouraged more Europeans to read, Smith argues, but that it arose to meet the demand from an increasingly literate population.

The rise of mass-market paperbacks in the 20th century did democratize reading by offering accessibly priced books to a growing middle class. Penguin paperbacks were originally sold at sixpence – the price of a pint of beer or a pack of cigarettes.

Smith is not against books being used for alternative purposes: “yoga block, doorstop, fly swat, flower press, deportment aid”. Not all readers are as open-minded: literary Twitter erupted in indignation when an author posted images of paperbacks he’d cleaved in half for portability. Smith devotes several chapters to the destruction of books – whether by bonfire or censorship.

Today, book banning tends to happen either pre-emptively, through pressure on the publisher (such as Woody Allen’s memoir getting dropped by Hachette after employee opposition in light of allegations of sexual abuse) or at a local rather than legislative level. Community bans often end up boosting rather than blocking sales: purchases of Art Spiegelman’s graphic novel about the Holocaust, Mouse, increased nearly eight-fold after a Tennessee school district banned it for “unnecessary use of profanity and nudity and its depiction of violence and suicide”.

Despite the death of print gloomily prophesied since Amazon introduced the Kindle in 2007, e-books and audiobooks seem to have settled into a peaceful coexistence with print. For all of the efforts of their designers to mimic the experience of reading a book, ereaders cannot reproduce the sensory pleasures of print, including the tactile sensation of page-turning. While perfumeries have attempted to recreate a book scent, a Kindle offers no such olfactory allure. Similarly, we learn from Lee, “library sounds” are some of the most searched-for “intoxicating sleep sounds” available online – a heady combination of “page-turning, whispering, writing” and the crinkling of dust jackets. And studies have shown that because memory is spatial, with readers recalling where information is located in a book, we retain less information when reading on-screen.

If the corporeality of books matters, the same holds true for the spaces which house them. Jeff Deutsch’s In Praise of Good Bookstores argues that bookstores provide far more than procurement. Deutsch, the director of the Seminary Co-op in Chicago, has been a bookseller for almost three decades. In that time, with books as a loss leader, Amazon has come to command market share of about half of print books and over three-quarters of e-books in the US. Meanwhile, according to US census data, the number of bookstores halved between 1998 to 2019.

In a habit the Japanese call ‘tsundoku’, many of us acquire books we never get around to reading: Susan Sontag called her library ‘an archive of longings’

Booksellers, writes Deutsch, need the margins from sales of “everything from socks to coffee” to remain viable, with sidelines constituting about a fifth of what the average independent bookstore stocks. “Bezos chose to devalue books in order to make already profitable merchandise, like socks, even more profitable,” he says. But the algorithm loses the serendipity of browsing: of the 28,000 titles sold at Deutsch’s bookstore in 2019, nearly 17,000 were single copies, many of which would not have been discovered if not on the shelves, he holds.

The cry – part-delight, part-despair – in the heart of all readers is that “there are just so many books”. Deutsch estimates that reading through his current stock of nearly 100,000 books would take at least 2,000 years, and the state library 70,000 years. In a habit the Japanese call tsundokumany of us acquire books we never get around to reading: Susan Sontag called her library “an archive of longings”.

While Deutsch’s paean is charmingly erudite, one gets a sinking feeling that he is preaching to the choir. Anyone drawn to a book called In Praise of Good Bookstores is unlikely to need convincing of their value as ruminative spaces. It would have been interesting to learn more about how the Seminary Co-op, which became the first bookstore to be run as a not-for-profit in 2019, is funded, and whether it might be an applicable model to support bookstores elsewhere.

The “extraordinary longevity” of the book, Smith deems, is due to “its technological simplicity”. It will probably, as such, survive. Let’s hope the same holds for bookshops. NPD, for one, are bullish, predicting that physical bookselling will increase market share in 2022 through “rebranding and re-merchandising efforts. . . community-building strategies, live-selling, and aggressive promotional campaigns ”. The stalwarts will have to make a lot of noise, it seems, to stay standing.

Portable Magic: A History of Books and Their Readers by Emma Smith Allen Lane, £ 20, 352 pages

As the latest edition of our annual round-up of the best of politics, economics and history to art, food and, of course, fiction – FT writers and critics pick their favorite reads

From ideas for rethinking economics and politics to pure escapism, FT writers and critics choose their favorite titles of what was an extraordinary year for books