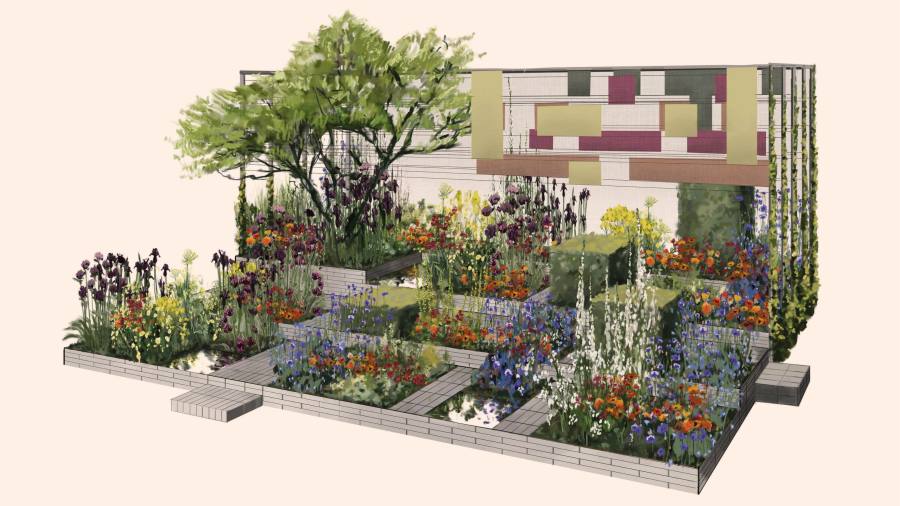 Race, gender, mental health and veganism are not topics you would usually associate with RHS Chelsea Flower Show, which returns this May 24-28 after last being held on its traditional pre-pandemic May date in 2019. But change is afoot, symbolized by the Queen being unlikely to make her once customary appearance at the world’s most prestigious gardening event.

The Royal Horticultural Society’s focus is now on environmentalism and community engagement under incoming director-general Clare Matterson, and there is an increase in the number of women, younger designers and people of color represented at the show. Among fresh faces at Chelsea, located in the grounds of the Royal Hospital Chelsea, west London, are Darryl Moore, Tayshan Hayden-Smith, Jamie Butterworth, Lilly Gomm and Lottie Delamain – up-and-coming designers with new takes on the century- old institution.

New Zealander Darryl Moore is designing for homeless charity St Mungo’s as part of Project Giving Back, which is funding 12 gardens that are reinvigorating the show this year. Two anonymous donors have given £ 12mn to fund gardens for three years.

Darryl Moore is making his debut at Chelsea with Adolfo Harrison as part of landscaping company Cityscapes – although he was part of a class of garden design graduates who worked at Chelsea on a 2004 garden for Woolworths.

Now designing at Chelsea on his own terms, Moore frequently works with the RHS, reusing old show garden materials to bring green spaces to urban communities.

The design for his St Mungo’s garden, produced as part of the charity’s Putting Down Roots horticultural training and therapy program, has been around for a couple of years, but organizing his own funding was proving tricky. Working with Project Giving Back meant “things fell into place this time”, he says. “A lot of people are in the same situation [without funding for a garden design]. I’m fortunate Project Giving Back is there to sponsor. It’s quite incredible. ”

The days of £ 1mn budgets are gone and gardens now need a ‘reason to be there, not just a big bank’

The garden is designed to be an urban pocket park: “A public space – which makes it a bit different to a domestic space – it brings together people, plants, health, wellbeing,” he says. “We need a lot more green spaces in communities. Chelsea is a good way to get that idea across. ”

Once the show is over, the Chelsea garden will be relocated to a site at London Bridge, as part of its funding conditions: “I’d definitely not be interested if that was not the case.”

Moore is reusing paving and scaffolding board materials from a BBC The One Show garden designed by Arit Anderson and a COP26 garden from Chelsea 2021. “I’m giving it another life again. It’s a joined-up cycle. ”

The plants are a mixture of native and non-native species, with grasses and perennials interspersed. Fagopyrum (buckwheat) is a signature plant. The planting is based on natural plant communities and the way they mingle ecologically, woven like a hedgerow.

Moore wants his garden to reflect natural processes and this includes being plant-based, as in vegan, so no animal products such as manures or fertilizers are used. Peat is also excluded. “It makes ecological and economic sense. It seems to me to be a no-brainer. Plants are central to everything in our lives. ”

Lilly Gomm designed for the Hillier nursery, winners of a record 74 consecutive Chelsea golds, in the plant marquee in 2019. Hillier, one of the last big commercial nurseries to exhibit at Chelsea, is missing its first May show for a century. But Gomm is back, sponsored by Switzerland Tourism in the Sanctuary Gardens category – her first outdoor garden at the show.

Her garden, A Swiss Sanctuary, will mix alpine and Mediterranean planting in a garden postponed from 2020 and originally designed for the RHS Hampton Court Palace Garden Festival. “With a project like this you have to keep your adrenaline going. This is fourth time lucky. ” The aim is to show what Switzerland has to offer horticulturally: “Before I started I just thought, ‘alpine meadows and skiing’. I did not realize it also had a Mediterranean climate. ”

Signature plants are small-flowered alpines such as gentians: “I do not think you see them too often in show gardens at Chelsea.”

For many years, fewer female designers than men won golds at Chelsea and landscape architect Bunny Guinness has recently said that is because of male-dominated judging panels.

Gomm says she has not experienced prejudice, but adds: “The balance between men and women has always swayed towards men. The judging team is more open now with different backgrounds and styles of people. But there can always be unconscious bias. ”

Jamie Butterworth’s Place2Be Securing Tomorrow garden, sponsored by investment manager Sarasin & Partners and designed with input from staff and students at a west London primary school, will be a space where children can feel calm and safe.

Butterworth says a Chelsea show garden is a “lifetime dream” – he fell in love with the show aged nine when watching it on TV in his Wakefield home.

The 28-year-old says Chelsea is more accessible now. The days of £ 1mn budgets are gone and gardens now need a “reason to be there, not just a big bank with too much money that wants to burn through a bit of cash and do some corporate hospitality”. Sarasin could have simply donated to a charity, but decided a garden would raise awareness and, ultimately, more money for children’s mental health charity Place2Be.

His father, sister and brother are all frontline healthcare workers and his mother is a primary teacher. “It was a good opportunity to give something back. The garden is a good way to raise awareness. ” He is also supplying plants to several Chelsea gardens via his business, Form Plants. Hedging, rather than fences or walls, is the trend: “There’s such a shift since 2016-18 from contemporary, crisp, sharp gardens to natural gardens.”

A Textile Garden for Fashion Revolution

Lottie Delamain is making her show debut “a little bit by accident” after unexpectedly receiving funding through Project Giving Back. She is in the new All About Plants category of four gardens inside the pavilion, where designs consist of at least 80 per cent planting. In support of the not-for-profit campaign group Fashion Revolution, Delamain has chosen plants used as textiles and fabric dyes – woad, weld, madder, flax and nettle. Being in the pavilion, there is no “borrowed” landscape of trees as a backdrop so this is a more conceptual design rather than a plot to take home direct inspiration from.

When applying for funding, November 2021’s Glasgow climate change conference COP26 was happening and fashion and climate change was top of the news. Delamain, a former textile designer who drew inspiration from treks in Vietnam, is “celebrating plants in new ways, showing people that what you wear often is made from plants. I hope lots will be familiar enough to make people think, ‘I did not know that about that plant’ and look at plants in a new way. ” The newcomer’s personal ambition? “To survive!”

Hayden-Smith, founder of social enterprise Grow2Know, says the garden – and recognition for black gardeners – “has definitely been a long time coming”. Originally planned for the canceled Chelsea show last year, once again Project Giving Back “came to our rescue and enabled it to happen”.

Clarke says: “It was divine timing. The idea was evolving as Project Giving Back came out. It was not like we had a packaged project ready for someone to fund. ” Hayden-Smith adds: “The RHS was working with us, allocating a space if we could get the funding, so it’s a kind of chicken-and-egg situation.”

The garden will be relocated to north Kensington after the show. “To me the real Chelsea Flower Show is in my community in North Kensington and the one [near] South Kensington is just a stopping off point for this garden, ”says Hayden-Smith. “So the plants were chosen to thrive in the community for the long term. That’s the legacy side. ”

Chelsea is changing gradually, but the newcomers recognize its enduring appeal. “I think there’s a space for Chelsea, an expensive gardening event that speaks for a demographic that has a high disposable income – but that should not be the pinnacle of gardening,” says Hayden-Smith. “If it is, it needs to completely rethink how it all comes together because it’s not sending out the right message to wider communities.”