On a spring ski break in Colorado last week, I found the town of Aspen buzzing with talk about Roman Abramovich. While the Russian oligarch has rarely been seen in the resort in recent years, speculation is rife among local realtors that the $ 50mn estate that Abramovich owns there will be seized by the US authorities if they decide to impose tighter sanctions on oligarchs as punishment for Russia’s invasion of Ukraine.

What makes the Aspen property easy to target is that it is apparently listed in Abramovich’s own name. That makes it something of a rarity: the glittering assets that oligarchs own are usually held in the name of interlinked anonymous shell companies or by people who act as fronts. This, of course, makes it hard for government officials to identify or seize assets without a lengthy legal process. “[Abramovich] ought to fire his accountant, ”one local realtor wryly jokes.

In Europe, the problem is arguably even more intractable, since webs of companies can be spread across multiple borders. Researchers at Copenhagen Business School estimate that the amount of money locked up in offshore tax havens is worth a whopping 10 per cent of global gross domestic product. And they note that “Russian elites hide significantly larger proportions of their wealth offshore than large western states.”

So far, so outrageous. But here is a key question for accountants, finance officials and anthropologists: could the pattern be about to change as a result of the war in Ukraine?

In trying to impose sanctions on Russian oligarchs, western governments are being forced to peer into the shadows

After all, in recent decades these financial constructs have been a source of western cultural and cognitive dissonance. Finance professionals and politicians in both the US and Europe have acted as if it was quite normal to have vast quantities of money moving around under false names. Shell companies have, to cite a concept beloved by social anthropologists, been an area of ​​glaring “social silence”, a cultural blind spot that goes unnoticed because it is so utterly familiar to insiders who have little incentive to challenge the status quo.

But now there are at least three factors that could expose this situation. First, in trying to impose sanctions on Russian oligarchs, western governments are being forced to peer into the shadows. Second, even before the Russian invasion of Ukraine, multilateral groups such as the OECD have been campaigning to inject more transparency into tax havens.

The third factor to challenge these social silences is the internet. This might come, for example, through data leaks of the sort that occurred when the so-called Panama Papers were handed over to a consortium of journalists a few years ago. But digital databases are becoming increasingly crucial too.

One example is the OpenCorporates platform. This was established a decade ago by British journalist-cum-digital-sleuth Chris Taggart to scrape data about company entities from all the public registries in the world. It now has information on 200mn entities, and Taggart hopes that by collating the information in a single place, it will be much easier to map out what goes on. 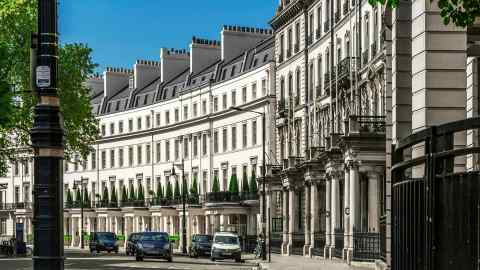 Sadly, it is still difficult to achieve transparency on a large scale because so few countries have publicly accessible “beneficial ownership” registries, ledgers showing who really owns the assets of anonymous companies. This looks very odd since the EU has previously adopted directives to create these all-important “beneficial ownership” registries. But while the UK and Latvia built public databases (Ukraine, to its credit, was trying to do this last year), countries like Spain keep their registries private, places such as Germany and Ireland do not release the data in machine- readable form ( which is crucial to process it) and France publishes only partial data.

Groups such as KPMG, the accountancy firm, blame this foot ‑ dragging on concerns about “data privacy”. But the real issue is that western governments and financial institutions have all too often been “enthusiastic participants” in schemes that allow oligarchs and others to stash their ill-gotten gains abroad, as political scientist Daron Acemoglu observed in a recent article.

Either way, as Taggart points out, this opacity makes it all but “impossible for journalists to analyze how many German companies are controlled by Russian oligarchs. Or NGOs to analyze the corporate webs woven by major Russian corporations. ” Businesses, too, are unable to work out which suppliers and customers they need to stop dealing with.

So let us hope that the sanctions scramble now acts as a trigger to finally force all the EU governments to implement their own directives on beneficial ownership, and that the American states follow suit. That will not in itself solve the corruption problem that has fueled Russia’s current toxic state. But it would be one way to start tackling these social silences. A world where Aspen realtors are shocked that a $ 50mn ski property is held in a Russian’s “real” name is a peculiar place. For the sake of Ukraine, and the wider global economy, this needs to change.