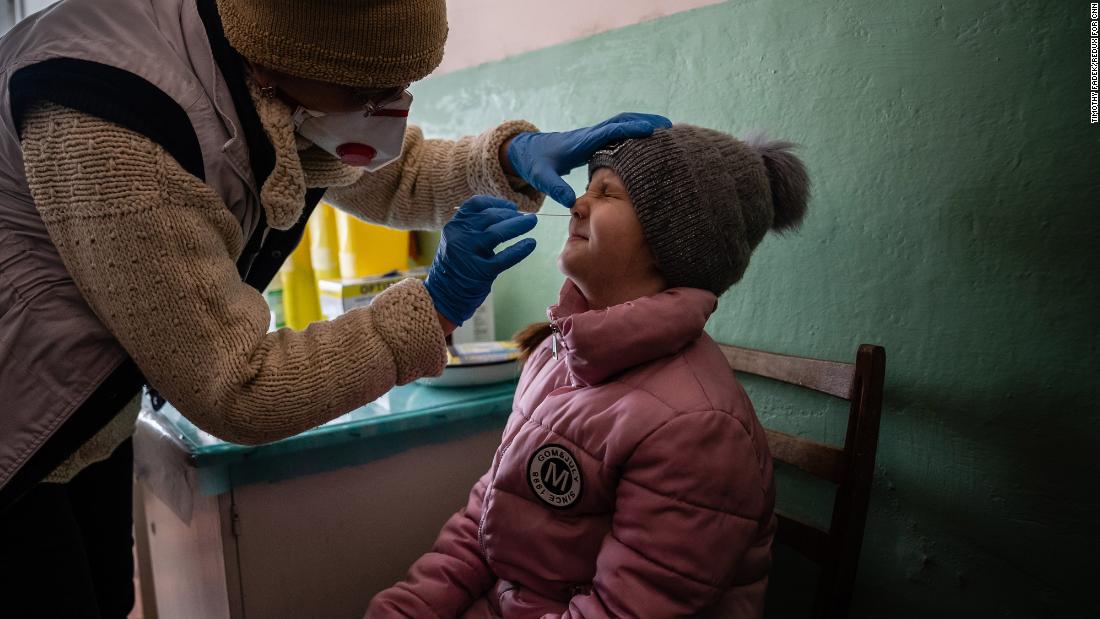 Nurse Lilia Schwez administers a Covid-19 test to 8-year-old Anhelina Yasinska in eastern Ukraine. Anhelina’s mother was concerned about her daughter’s fever, but she tested negative for Covid-19.

Nurse Lilia Schwez administers a Covid-19 test to 8-year-old Anhelina Yasinska in eastern Ukraine. Anhelina’s mother was concerned about her daughter’s fever, but she tested negative for Covid-19.

The Ukrainian village of Trokhizbenka used to be a weekend getaway destination, a relaxing place where urban dwellers could travel to take in some fresh forest air.

Now, the village is on the front lines of Ukraine’s ongoing conflict with Russian-backed separatists. Many residents have fled.

But not Lilia Schwez. She has a job to do.

The 56-year-old works as the only nurse in an understaffed and underfunded clinic that serves five villages.

“I did not want to be the only nurse here. I wish there was a full-time doctor and more nurses,” she said. “But this is what life handed me.”

There is a dental chair in one room of the clinic, but there has not been a dentist there in years. Another room is for OB-GYN, but that doctor works just one day every week or two. The nearest hospital, in Severodonetsk, is an hour and a half away.

So Schwez does house calls. Her husband, Vova, runs her to her appointments.

Most of her patients are elderly. Many of them live alone. Covid-19 has been a problem, but it’s not the only one.

“Alcoholism and diabetes are rampant,” she said. “The stress is causing it.”

Switzerland knows all about stress. Her home is so close to the line of control, she can see it from her backyard. Her roof was destroyed by shelling in 2015, and now she has “terrible nightmares” about shells raining down on people asleep in their beds.

But she will not abandon those who count on her.