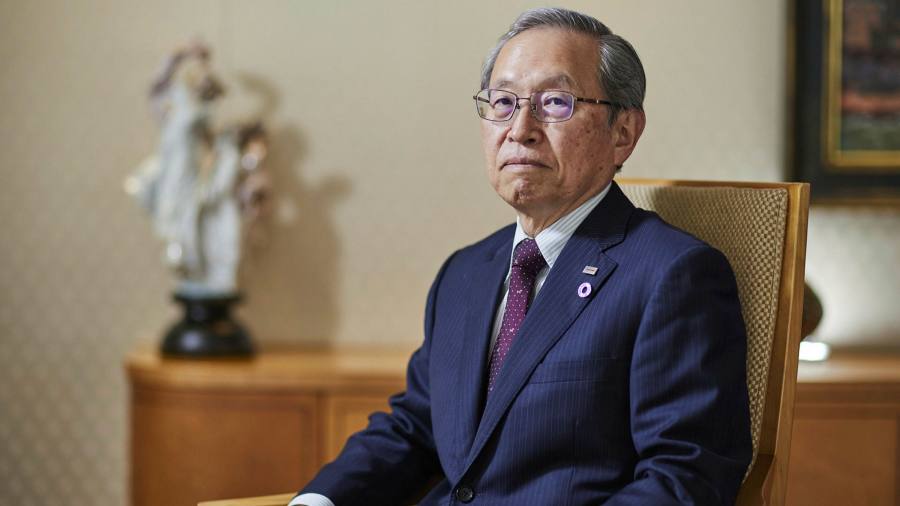 The chief executive of Toshiba resigned suddenly on Tuesday, reviving speculation that the Japanese group will consider a take-private deal and hardening the resolve of large investors to oppose the company’s plan to split in two.

The resignation of Satoshi Tsunakawa, a former chief executive who returned to the helm of Toshiba in 2020 after the ejection of his successor during an earlier bout of turmoil, adds another twist to a saga that has become Japan’s showcase clash between corporate leadership and shareholder capitalism .

The company said that its new leadership, which draws on internal candidates, would press ahead with a controversial plan to split the industrial conglomerate in two.

However, large investors told the Financial Times that they would continue to resist that outcome, and would remain in opposition to Toshiba’s leadership until it formally resumed talks with potential buyers for the company.

The proposal was preliminary, but triggered a boardroom coup that led to his ejection and has led to a situation where some of Toshiba’s largest shareholders have said they will oppose any strategic option that does not allow for the possibility of a buyout.

A strategic review conducted in 2021 and advised by bankers at UBS originally recommended a three-way split. However, that idea encountered strong opposition from investors who believed that Toshiba’s board did not properly explore the possibility of a buyout of the entire company by private equity.

This year, Toshiba said it was backing a more modest two-way split, which also failed to satisfy many investors.

Because of its financial crisis five years ago, Toshiba’s shareholder register is heavily freighted with foreign hedge funds and activists. They include US fund Farallon Capital, 3D Investment Partners and Effissimo a Singapore-based fund.

Tsunakawa resigned along with Mamoru Hatazawa and Shigeru Fukuyama, both senior executives of the company and all known, according to people inside the company, as strongly opposed to a take-private deal.

The executive named as Tsunakawa’s successor as chief executive, Taro Shimada, is meanwhile known internally as having been in favor of resuming talks with private equity towards a buyout deal.

But in a press conference on Tuesday, Shimada, who joined Toshiba in 2018 from Siemens, appeared to be supportive of the existing plan to split the company.

“We will proceed with the split plan as planned. In order to do so, we want to build a strong relationship of trust with many stakeholders at the earliest possible stage. ”

Large shareholders said they would not take those comments at face value, and added they would maintain pressure on the new leadership to reopen talks with private equity.

When asked about how he would like to frame the relationship with investors, Shimada said it was “important to have the same perspective”.

“When I used to work overseas, I was often told to try and walk in someone else’s shoes,” he said, adding to the astonishment of several investors that he did not know whether previous chief executives had struggled to manage the shareholder relationship or not.

On Tuesday, the outgoing chief said he had accomplished his mission of handing over the reins to the next generation of leaders. “I am confident I was able to hand over the leadership towards Toshiba’s evolution into the future.”

For several years, the company has endured a series of shareholder revolts, and was humiliated in 2021 by an independent report into a collusion between Toshiba and the government to suppress activist shareholders at the group’s 2020 annual general meeting. At the 2021 AGM, in a first for a company of Toshiba’s size and profile, shareholders forced out the chair of the board.